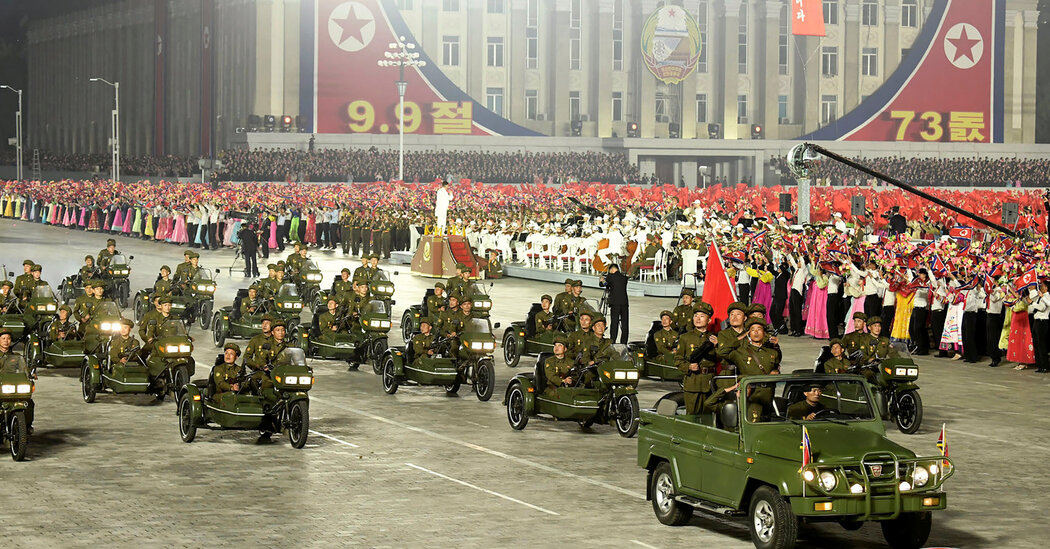 SEOUL — ​North Korea’s leader, Kim Jong-un, attended a national predawn military parade on Thursday, but skipped the opportunity to raise tensions with the United States through a fiery speech or the display of long-range ballistic missiles.

The parade included military reservists, police officers, and factory and health workers, and was a departure from the nighttime military parades held last October and in January. Those parades featured what appeared to be newly developed intercontinental and submarine-launched ballistic missiles​, indicating that the North was ramping up its weapons programs while nuclear disarmament negotiations with Washington remain stalled.

At one of the earlier parades, Mr. Kim also delivered a speech vowing to boost his country’s nuclear arsenal.

When recent commercial satellite imagery revealed preparations for the military parade on Thursday in Pyongyang, marking the government’s 73rd anniversary, outside officials waited to see what new message Mr. Kim might deliver or ​what new weapons he might debut. ​But the parade appeared to be a much more modest affair, as Mr. Kim — with a tan Western-style suit draped over his visibly thinner frame — used the event to boost the country’s morale.

North Korea has suffered under international sanctions and draconian restrictions related to the coronavirus pandemic. Rather than a platform to send a new message to Washington, the parade was seen as a celebration of those who have borne the brunt of Mr. Kim’s efforts to rebuild the economy.

Instead of the regular armed forces, usually seen goose-stepping in perfect unison, the parade featured the ordinary military reservists who have often been mobilized by Mr. Kim to build his large infrastructure projects.

In his speech at the parade, Ri Il-hwan, a Workers’ Party secretary, urged North Koreans to embrace a “singled-minded unity to overcome the present-day crisis,” the North’s official Korean Central News Agency reported.

“North Korean society is under tremendous stress because of decisions made by the Kim regime. So the parade is intended to show strength and serve as a quarantine morale booster​,” Leif-Eric Easley, a professor of international studies at Ewha Womans University in Seoul​, said by email. “We shouldn’t over​-​interpret foreign policy or negotiating signals from a parade that’s primarily aimed at domestic political audiences.​”

North Korea tested three ICBMs in 2017, leading to sanctions from the United Nations. After the tests, the country claimed an ability to target the continental United States with a nuclear warhead, and said that its people should feel safe enough to focus on rebuilding the economy rather than on external threats. ​But the sanctions have continued to devastate the North Korean economy, and Mr. Kim’s summits with ​former President Donald J. Trump failed to ​lift them.

Mr. Kim has since apologize​d​ repeatedly to his people for the economic woes caused by ​the sanctions​ and the pandemic, which has deepened his country’s isolation. He has also vowed to strengthen the North’s nuclear deterrent​. ​Last October, the North unveiled its biggest-yet intercontinental ballistic missile at a parade marking the 75th anniversary of the Workers’ Party. In another military parade​, held days before President Biden’s inauguration​ in January​, North Korea showed off a new submarine-launched ballistic missile. ​

North Korea has refrained from​ testing an ICBM or a nuclear device since 2017. But the United Nations’ nuclear watchdog said last month that the country appears to have restarted a reactor in its main nuclear complex​ that helps produce plutonium ​for nuclear warheads. The North has yet to respond to the Biden administration​’s offer​ to renew ​nuclear disarmament talks ​“anywhere, anytime without preconditions​.”

This week, the International Olympic Committee suspended North Korea until the end of 2022 in response to the country’s unilateral decision not to participate in the Tokyo Summer Games this year​ for fear of the coronavirus. ​The suspension will prevent North Korea ​from competing in the 2022 Beijing ​Winter ​Olympics, increasing its isolation in the international community.

Jonathan Mirsky, Journalist and Historian of China, Dies at 88