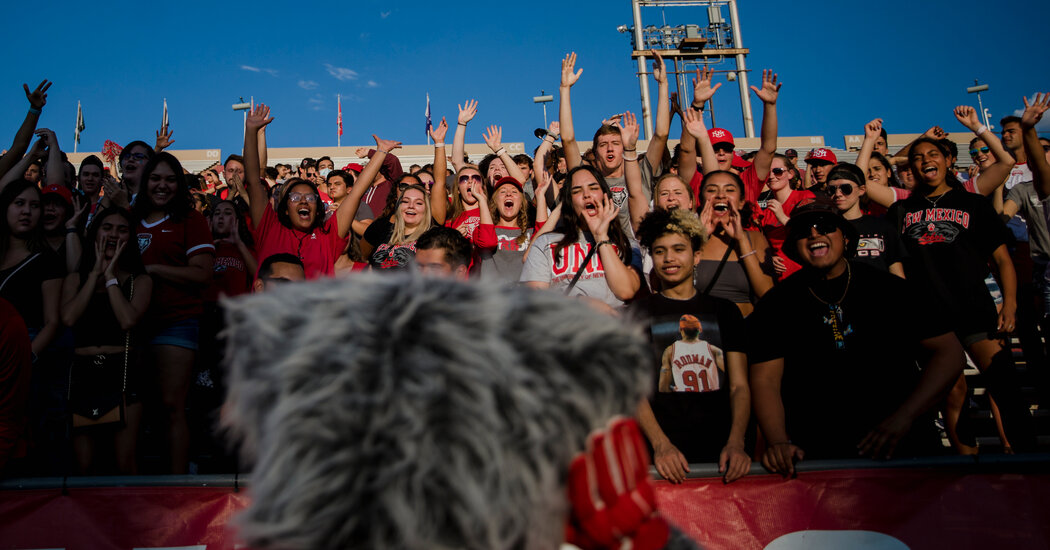 ALBUQUERQUE — Normalcy, or what passes for it these days, started for Louis Trujillo when he arrived around 6 a.m. on Thursday to tailgate at the University of New Mexico. Ordinary came for Yolanda Sanchez when she began her shift in a stadium parking lot at 7 a.m., and for Andrew Erickson, a Lobos wide receiver, as he warmed up in sight of the Sandia Mountains about 10 hours later.

But it was not until shadows fully stretched between the sidelines that the Lobos and their fans saw a rite they had not witnessed in 642 days because of the coronavirus pandemic: a football game at University Stadium.

“Football is a game, I think, that is fantastic in a stadium,” said Elton Hodgson, a retired Albuquerque police officer, who ahead of Thursday’s matchup set up an encampment with his family along Avenida Cesar Chavez. “If you watch it on TV, you get the replays and all that stuff. But there’s just a feel of being in a crowd and a stadium. You just can’t replace that.”

His daughter, Nicole Gates, had taken the day off work and chimed in: “You appreciate those things that you had that you lost, and you didn’t even realize it was valuable at the time because you came for 20 years without stopping.”

If 2020 was the ultimate year of disruption for college football, 2021 could be the ultimate year of homecomings. After schools from coast to coast, including a range of historically Black colleges and universities and every member of the Ivy League, did not play at all in 2020, or could only compete outside of their states, this season’s first weeks are dotted with games featuring teams on their own fields for the first time since 2019. There are at least five such games in Division I on Saturday.

Thursday brought New Mexico’s moment, a season after public health restrictions left University Stadium closed and the fans who routinely cried “Everyone’s a Lobo!” anywhere but the bleachers inside or the Howl Zone outside.

In turn, the Lobos themselves were elsewhere, too, living an odyssey within an odyssey.

Barred from holding full practices or games in Albuquerque, the team took a 43-day road trip. With a hub in Las Vegas, the team played its intended home games there and traveled where allowed for away matchups. Once the Lobos set up in Nevada, no players or coaches tested positive for the coronavirus, according to the school.

The journey was crucial for the finances of New Mexico’s athletic department, which traces much of its revenue to in-person events. Eddie Nuñez, the athletic director, said the Las Vegas residency had cost about $750,000, but that university officials had reasoned that staging a season someplace would position New Mexico to earn several million crucial dollars from television rights.

Plus, Nuñez said, the university’s leaders could hardly stand the notion of their team being forced to watch their Mountain West Conference counterparts play on without them.

But pandemic policies meant that New Mexico’s fans could not attend games in Las Vegas. Even Nuñez stayed behind in Albuquerque, where Lobos football has been among the city’s biggest sports draws. On Thursday evening, though, he toggled between tailgates before the game, offering stickers and high-fives and turning someone’s bratwursts on a grill in the Stadium West lot.

One person after another approached to express some level of exuberance that, at last, the Lobos were home.

“I can’t speak for everybody else, but my guys and my crew, we live for this,” Trujillo said before the Lobo Walk, when the players passed cheerleaders and howling fans as they headed toward the stadium. “This is what we do. We come out here, we tailgate, we go and watch Lobo football.”

There were still predictable reminders of the pandemic that people throughout the college sports world had hoped would be tamed by now. Parking passes were digital, and a mask mandate was in place for indoor areas of the stadium.

There was, however, college football for the announced crowd of 15,908, slightly higher than New Mexico’s average home attendance in 2019. The audience did not have to wait long to see scoring. Just more than two minutes into Thursday’s game, Terry Wilson, the quarterback who transferred from Kentucky, threw an 11-yard touchdown to the tight end Kyle Jarvis to take an early lead over Houston Baptist University. Although the visitors threatened to close a 7-point gap late, the Lobos forced a fumble and won, 27-17.

The New Mexico faithful freely concede that their program is undergoing a rebuild. (Coach Danny Gonzales said after Thursday’s victory that there had been “a great habit of losing around here.”) Even after a 2-5 campaign in 2020, they imagine conference championships someday under Gonzales, the second-year coach who was raised in Albuquerque and played at the university as a walk-on punter and safety.

But ahead of any long-term prospects on the field, people around the university spent months just thinking about Thursday night. Gonzales discarded the demeanor of a narrowly focused, game-planning coach and confessed that he had often talked with his wife about what it would be like to lead his team at home.

“Everyone, in the back of their minds, has been excited and to have energy from the crowd,” said Erickson, the receiver who, after a redshirt year, an injury and the upended 2020 season, finally played in his first home game on Thursday. But, he added in an interview early this week, “It would be a distraction if we were all thinking about how many people were going to be there.”

Their supporters seemingly had no such concerns.

“If we had had to come in at 5, I would have been here,” Sanchez said. “Everybody is so happy to be back.”

Gonzales, in an interview after the game, said he had arrived Thursday morning and counted the RVs — he spotted 12 — that were already parked.

“That hasn’t happened around here in a long time, and that’s really cool,” said Gonzales, though he was plainly more thrilled about snapping an even longer streak: the 712-day run since New Mexico had won in Albuquerque.

At the start of the week, Erickson had wavered between acknowledging the advantages of playing at home and the perils of getting caught up in the hype.

On Thursday night, after the crowd seeped out and savored a Lobos victory that had been more fraught than they would have preferred, he offered something of a reassessment.

“Just being in the stadium and feeling the energy, when they made a big play, it was silent, and when we made a big play, everyone just lit up,” he said. “It just shows how important it is.”

He had been coming to New Mexico games since childhood, he said, but until Thursday, he had never done the Lobo Walk as a Lobo himself.

“Being able just to high-five that little kid’s hand as you walk by and go into the stadium and preparing to represent your state,” he said, “it’s a really awesome feeling.”

If one long delayed.

The crowds will almost certainly be thicker next week for the Rio Grande Rivalry showdown against New Mexico State, which played in Las Cruces last weekend after a 644-day gap.

But it will be another home game for the Lobos.