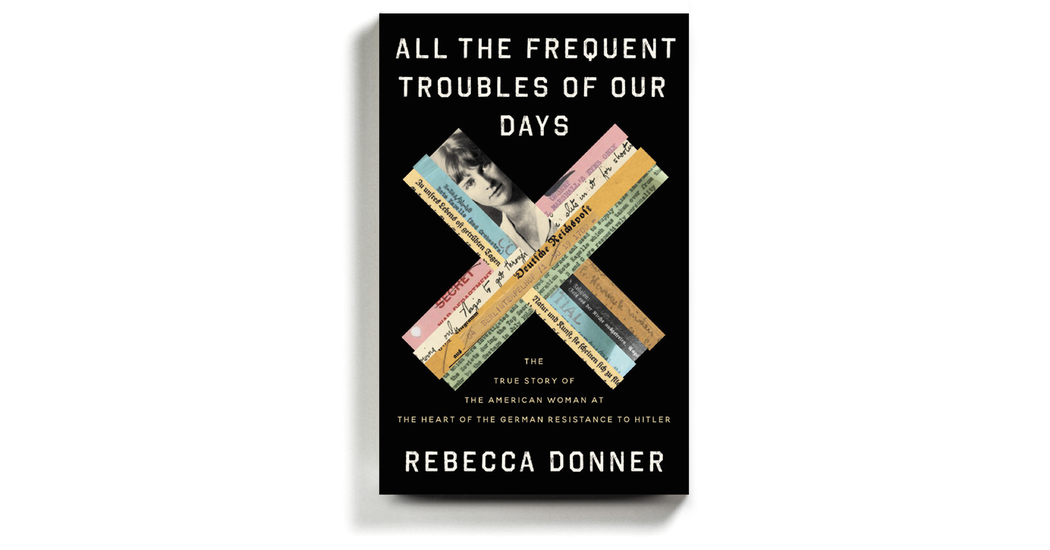 The title of Rebecca Donner’s astonishing new book is a line by Goethe, from a volume of his poems that had been smuggled into the cell of Mildred Harnack — an American woman who was shackled in a Berlin prison, awaiting her death sentence by the Nazi regime. On Feb. 16, 1943, the day she would be taken to the execution shed and beheaded, a chaplain found Mildred hunched over the poems, scribbling in the margins. The heavy gothic font of the German original was accompanied by the ghostly script of her English translation, written with a pencil stub.

Donner includes an image of that page in “All the Frequent Troubles of Our Days,” a book about Harnack’s life and death that turns out to be wilder and more expansive than a standard-issue biography. (A diligently researched book about Harnack was published two decades ago, by Shareen Blair Brysac, titled “Resisting Hitler.”) Donner is Harnack’s great-great-niece, so this is a family history too. It is also a story of code names and dead drops, a real-life thriller with a cruel ending — not to mention an account of Hitler’s ascent from attention-seeking buffoon to genocidal Führer.

Mildred Fish was born in Milwaukee in 1902; her husband, Arvid Harnack, was German. They met as graduate students at the University of Wisconsin, and eventually settled in Berlin. After Hitler was appointed chancellor in 1933, they started holding secret meetings in their apartment for underground resisters. Mildred was teaching English and found recruits among her impoverished students; by 1935, Arvid had landed a job at the Ministry of Economics, where he was privy to intelligence that he would eventually give to the Soviets. Whether this fateful decision had to do with antifascist expedience or pro-Communist ideology — the Nazis would later call the espionage group Red Orchestra — Donner doesn’t quite decide.

[ Read our profile of Rebecca Donner. ]

Donner pieces together Mildred’s life from fragments, sifting through government archives, interviews, photographs, diaries and letters — though some of those diaries and letters were destroyed, and the most personal items weren’t always revealing. “Her aim was self-erasure,” Donner writes; such effacement was a matter of survival. Several letters show Mildred trying to present a brave face for her worried family back in the United States. Staying meant risking imprisonment and perhaps death; leaving would have meant abandoning Germany to the Nazis. Even at the end of this extraordinarily intimate book, Mildred remains somewhat of an enigma. “Despite her wish to remain invisible,” Donner writes, “she left a trail for us to follow.”

What emerges is a portrait of a woman who had already noticed how economic suffering was tearing the fractious Weimar Republic apart. When establishment conservatives pushed for Hitler’s appointment as chancellor, he had been widely derided as too bumbling and ludicrous to ever obtain any real power. “All feel the menace but many hide their heads in the sand,” Harnack wrote to her mother in 1932. Donner evokes a Berlin on the brink, teeming with linden blossoms and swastikas.

When Mildred learned she was pregnant in the summer of 1933 — a pregnancy she had spent two years preparing for — she was so unnerved by what was happening in Germany that she traveled to London for an abortion; another pregnancy several years later ended in a miscarriage. Donner writes sensitively about Mildred’s travails while also describing how women were expected to serve a Nazi regime dedicated to the idea that “the role of women is to populate Germany with good Germans.” According to a friend, Mildred was “awkward in all practical things of life” — an inept cook and an indifferent housekeeper. But with her “wheat-colored hair” and “gray-blue eyes,” she certainly looked the part of what the Soviets called “an intensely Nordic type,” and she used her appearance to her advantage, presenting herself as an ardent Nazi supporter in order to throw any informants off the scent.

Sometimes the disguise worked too well. On a trip to London, Mildred obtained an introduction to the writer Rebecca West and tried to recruit her, sussing her out by telling her that Hitler was a fan of her books. West was immediately disgusted. “I threw her out of the front door,” West later recalled, adding a remark she would later regret: “I hope Hitler does to you the worst thing he ever did to a Jew.”

Donner alternates sections about Mildred with sections titled “The Boy” — referring to Donald Heath Jr., the 11-year-old son of Donald Heath, an American diplomat who was gathering anti-Nazi intelligence while working for the embassy in Berlin. Twice a week, Donald Jr., or Young Don, as he was called, visited Mildred in her apartment, where they would talk about books and she would slip a note for his father into his knapsack. Donner tracked down Young Don in California and interviewed him in 2016, when he was 89. He recalled how Mildred kept pushing him to remember things. “You have a good memory,” she would tell him. “Don’t forget.”

“All the Frequent Troubles of Our Days” is so finely textured that I can’t even begrudge Donner’s decision to narrate events in the present tense; a choice that can sometimes seem like a stagy effort to amp up the drama instead comes across as an effective device for conveying what it felt like in real time to experience the tightening vise of the Nazi regime.

Amid all the tension and the horror, Donner has an eye for stray bits of grim comedy. A coterie of Soviet spies in Brussels set up an import-export company for cover, giving it the absurdly conspicuous name of Foreign Excellent Trench Coats.

Mildred and Arvid escaped Germany in September 1942, intending to get to Sweden from Nazi-occupied Lithuania, where they were swiftly arrested and hauled back to Berlin. When Donner describes them awaiting trial for treason, the dearth of information about Mildred feels especially wrenching; we catch her only in glimpses, looking ever more emaciated and ill, while she was kept in strict solitary confinement. Arvid was soon sentenced to hang; Mildred was sentenced to six years of hard labor.

But Hitler intervened to overturn Mildred’s sentence, insisting on another trial that would deliver the death sentence he desired. Wielding that kind of absolute power was unfathomable to what most people had expected of Hitler less than a decade prior. Back then, Mildred and Arvid believed that for all of Hitler’s noisy bombast, he was bound to fail. “They’re convinced that Germans will revolt against this lunatic politician,” Donner writes, in a chapter covering the years 1933 and 1934. “It’s just a matter of time.”

Can girls do better as CA