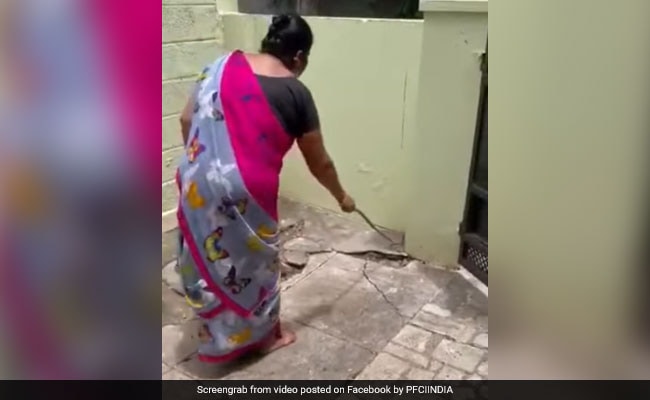 The cons of the Internet are many, but sometimes it teaches us a thing or two about empathy and that’s what makes us want to be a better person. We stumbled on a rare video of a human trying to save a reptile and it has our heart. An official Facebook page of an NGO shared the clip of a woman trying to save a snake, instead of panicking at the sight of it. The general reaction after spotting a snake in the house is panic, horror and then violence. But, such was not the case with this person.

In the video, the woman, who finds the snake in the cracks of the floor, takes a stick and tries to drive it away, out of the front gate. Moments later, we see the reptile moving in the said direction. The NGO – People For Cattle in India (PFCI) – which is aimed at the prevention of illegal cattle trafficking and slaughtering, applauded the woman’s actions in its caption. “A wonderful video of a woman sending the snake to safety instead of pressing the panic button,” it read.

The video soon garnered praise from Facebook users who applauded the woman for her calmness.

“This is heart-touching,” wrote one user.

Another shared his own experience of saving snakes. “We had so many conflicts at the worksite, every snake caught were safely returned to a nearby forest.”

“Too good, God bless,” read one of the comments.

A person said, “I hate people who kill snakes. Even I have fought with few while seeing them doing it, this is heart touching same thought.”

A few of them wrote, “Good job”

Since being posted on Facebook, the video has recorded 91K views.