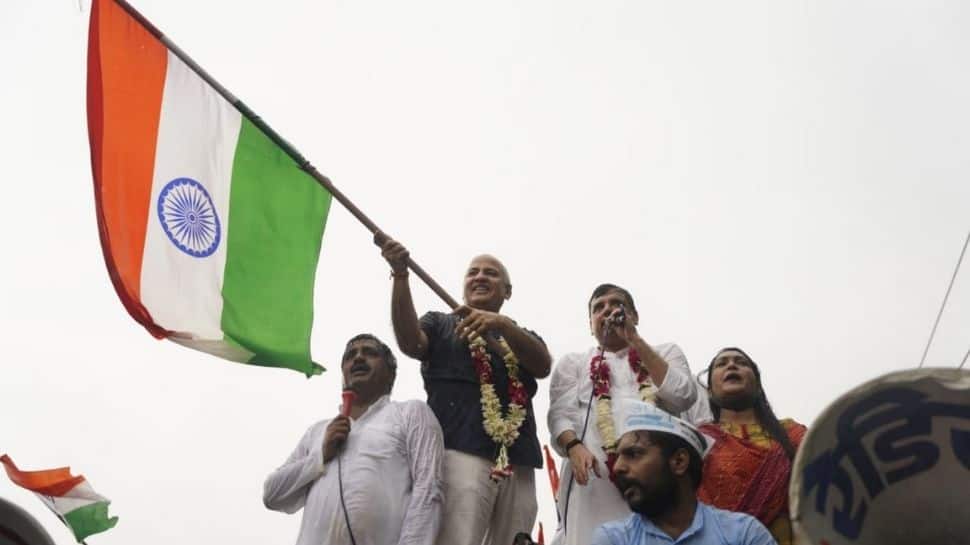 On this occasion, Sisodia said, “Our freedom fighters have sacrificed their lives for the glory of the Tiranga. Through honesty and education, we will take the politics of development to every village of Uttar Pradesh and work to bring back the glory of the Tiranga. Aam Aadmi Party will take out the Tiranga Yatra in Uttar Pradesh and take a pledge that every child, woman, elderly and farmer living under this Tiranga should be able to attain their rights.”

Sisodia said, “BJP people follow nationalism, but when it comes to education for the children of people standing under the Tiranga, they eat away the mid-day meal money of the children. When a journalist raises questions on why children are being given Noon-Tel-Roti in the mid-day meal, they are arrested and imprisoned for 6 months. Due to such actions of the BJP, the pride of the Tiranga is getting tarnished. 3 days ago in Firozabad, Uttar Pradesh, a pregnant woman died on the road outside the hospital due to lack of beds. The Uttar Pradesh Government has become so ineffective that it cannot provide beds to pregnant women, this is very shameful and pulls down the pride of the Tiranga.”

Manish Sisodia said, “Uttar Pradesh Government is neither able to provide jobs to the unemployed nor farmers are getting a fair price for their crops. Corruption is rampant everywhere in the entire state. We will take the politics of development to every village of Uttar Pradesh through honesty and education. In the 75th year of independence, we take a pledge that through our work, we will increase the pride of the Tiranga. We will work and fulfil the dream of India as envisioned by Baba Saheb and other freedom fighters.

Sanjay Singh said that through these Tiranga Yatras, we will stand under the Tiranga and take a pledge that we will make Uttar Pradesh corruption free, farmers will get the right price for their crops, the homes of the poor will be uplifted, people will get free water, the unemployed will get employment, people will get free health treatment and receive quality education. In the upcoming assembly elections, Aam Aadmi Party will contest all 403 seats in Uttar Pradesh.

He said, “There is an atmosphere like British rule in Uttar Pradesh. When the Aam Aadmi Party organized a Tiranga Yatra in Agra to celebrate the 75th year of independence, 517 people were sued by the Yogi Government. Today, the lotus flag has become bigger than our Tiranga, for the BJP. When the BJP takes out the Jan-Ashirwad Yatra, thousands of people gather and nothing happens, but if people celebrate independence with the Tiranga, then they are prosecuted. Yogi ji can sue 1 or 1000 cases, but our Tiranga Yatra will not stop. Tiranga is our pride and pride of 130 crore Indians. The Jan-Ashirwad Yatra of the BJP has become ‘Murdabaad Yatra’. BJP ministers are being welcomed with slogans of ‘Murdabaad’. The people of Uttar Pradesh will soon give an answer to this anger of the BJP.

China slams Quad ahead of 1st in-person summit in US, says it’ll find no support