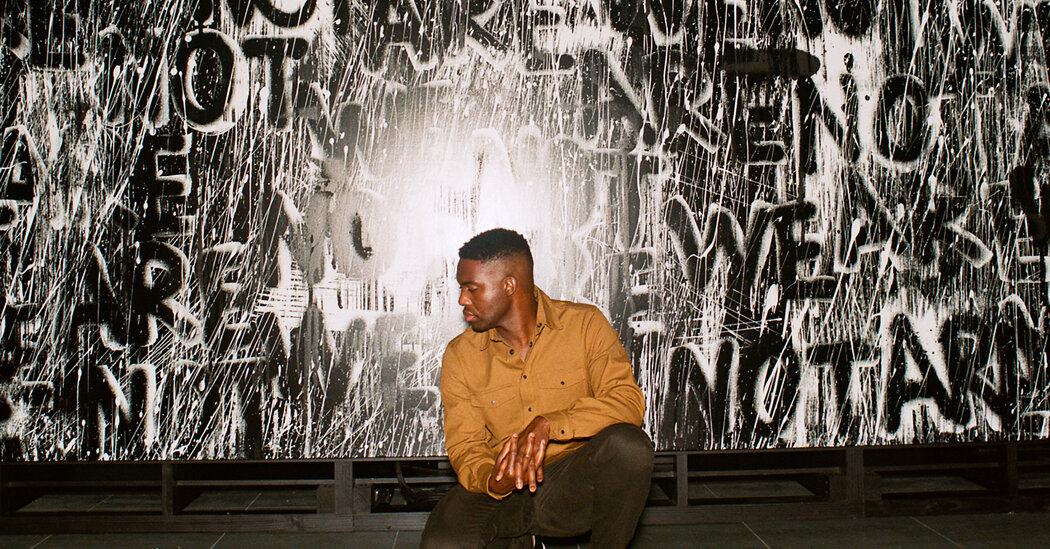 The Marron Atrium of the Museum of Modern Art is a big, awkward space, a hollow that rises from the second to the sixth floor. Since opening amid MoMA’s 2004 expansion, it has hosted many projects — but few as complex as “Who Is Queen?” by Adam Pendleton, which arrives on Sept. 18.

Over several months, the artist has built three black scaffold structures 60 feet high, off the walls, like an endoskeleton. Each forms a layered, irregular grid, with internal ladders and landings. The ensemble fires off references — De Stijl, Le Corbusier’s Unités d’Habitation, Manhattan tenements. But the use of lumber — two-by-fours and so on — evokes humble home-building, and the overlaps where planks are bolted together generate a kind of shimmer and rhythm.

Pendleton, 37, is best known as a painter of abstract canvases in a distinctive black-and-white style that challenge how we read language. Made using spray-paint, brush and silk-screen processes, they incorporate photocopied text, words unmoored from context, letters scrambled and repeated. Here, his large paintings are dispersed on the scaffolds at different heights, some deliberately obscured by the lattice.

But there is much more. “Who Is Queen?” includes drawings and sculptures; on a huge screen run three video works, including his new portrait of Jack Halberstam, whose work in queer theory offers an alternative history of sexuality. An audio collage fills the space with sounds of Amiri Baraka reading poetry, music by the violinist Hahn Rowe, a Black Lives Matter rally, dialogues with scholars, snippets of jazz.

The museum is calling the project “a total work of art for the 21st century” — channeling the Gesamtkunstwerke of early Modernism. “This idea of the total artwork that activated all your senses was really important to the avant-garde,” said Stuart Comer, MoMA’s chief curator of media and performance, who organized the show.

Pendleton put it differently. “I’m trying to overwhelm the museum,” he said.

“Who Is Queen?” gathers material that addresses a host of contemporary topics. It is prompted by a challenge to the personal identity of the artist, who is Black and gay — the expression “you’re such a queen,” once tossed at him in a way that got under his skin. But he has broadened the concern to American society as a whole — where it is headed, and whether we must all remain shackled to narrow identity labels.

It is never less than a lot with Pendleton. The artist grew up in Richmond, Va., studied art in Italy as a teenager and came to New York at 18. He eschewed college or conventional art school in favor of learning by doing and has emerged as a foremost multidisciplinary thinker with a compelling aesthetic.

His work has been widely shown, with a breakout performance, “The Revival,” in the 2007 Performa biennial and a slew of major exhibitions ever since. Two-person shows have paired him with Joan Jonas, Pope. L and David Adjaye.

“Adam is a sage,” said Adrienne Edwards, the director of curatorial affairs at the Whitney Museum, who has followed his career closely. She called his work a “lush Conceptualism,” rigorous but elegant and open-ended.

But the work is never easy. Pendleton claims for his art the privilege — the necessity — that the French Caribbean scholar Édouard Glissant called the right to opacity: to not be legible, to not have to explain oneself.

“I’m fine with being misunderstood,” he said. “You can see it in my work — these fields of stuttering language. It’s a refusal, but it’s an invitation at the same time.”

On a recent summer night, Pendleton offered an intimate look at his process. He had traveled to Richmond to shoot footage of the equestrian statue of Robert E. Lee, which became a prominent gathering site amid the uprisings of 2020 and, with its pedestal coated in protest messages, a marker of the current American climate.

The film would run within “Who Is Queen?” It would rotate with — and possibly mix into — a piece on Resurrection City, the encampment that the Poor People’s Campaign held on the National Mall in 1968, that Pendleton was compiling from archival footage and period documentation by the photographer Jill Freedman.

It was an engagement with familiar terrain.

“I drove down this street innumerable times,” he said, as the film crew set up on a grassy median on Monument Avenue. He recalled growing up somewhat inured to its statuary, having formed, like many Black Southerners, a sort of carapace against the Confederate hoopla. “This just became kind of ordinary,” he said.

No longer. While the city had removed other statues of Confederate leaders, Lee’s remained up: It fell under state jurisdiction, and while the governor, Ralph Northam, vowed to take it down, the matter was tangled in court. (On Sept. 8, the 21-foot statue, which had stood since 1890, was finally removed; the pedestal remains for now.)

But to Pendleton, the monument in its interim state — gloriously emblazoned with messages celebrating Black, brown, queer and trans lives, denouncing police brutality and more — formed a remarkable text in itself. Even after the city put a chain-link fence around it in January, it still emitted vital, unruly signals.

As night fell, crew members trained powerful spotlights onto the statue. They illuminated Lee’s head, the horse’s haunch, a patch of sky. Moving across the pedestal, they cast medallions of light that excerpted the jumble of graffiti and slogans into perfect circles. It was a different way of “reading” the statue — akin to how Pendleton’s canvases transform written material.

“That’s how I think when I work on a painting,” he said. “It’s both a document and a response to a document, with gestures and marks. And that’s why I love this moment and this surface.”

For some takes, an actor, Thai Richards, stood on a platform, shirtless and impassive, the statue at his back. The lights moved over his body, placing him in the glare then consigning him to penumbra — hypervisible, then unseen.

Pendleton guided the dance of the beams. “Use it like your eye,” he said, urging the spotlight operators to slow their motion, to find a rhythm. “

The summer night thickened. “We’ve been looking at this for hours,” Pendleton said. It wasn’t a complaint. “One of the main things art has to do is to get you to look, and not just for 10 seconds,” he said.

“Who Is Queen?” is a decade in the making, first sparked in conversations with Edwards; in addition to Comer, the organizers include the rising curator Danielle A. Jackson (now at Artists Space) and a curatorial assistant, Gee Wesley. The architect Frederick Tang worked on the structure, and the DJ Jace Clayton on the audio.

The installation draws attention to Pendleton’s work beyond painting — his video portraits, for instance, are an ongoing series that has included the artist Lorraine O’Grady or the choreographer Ishmael Houston-Jones — but even more to his process.

His is a collagist method, guided by a principle he calls “Black Dada,” which excerpts and juxtaposes writing, images, music in service of a social understanding, notably of Blackness in America. (The term invokes the European Dadaists and Baraka’s sharp 1964 poem “Black Dada Nihilismus.”)

Pendleton will till a furrow for years. His engagement with MoMA, for example, goes back to his residency there in 2012-2015; he has studied its exhibition history, down to analyzing its audio guides.

His research into visual aspects of social movements, meanwhile, crystallized in 2011 around Occupy Wall Street and its offshoots, then drew him to study historical antecedents while also following Black Lives Matter and traveling to protest sites.

These interests converge in the MoMA installation. Edwards observed that the project’s long gestation made it “a sort of container that marks the last 10 years of social questioning.”

Over coffee in Richmond the morning after the shoot, Pendleton recalled the incident that inspired “Who is Queen?” It was a fleeting moment in conversation, he said, but it raised “this idea that someone else can name you or claim you, and the vulnerability that comes with that.”

The project, he said, “is probably my most deeply autobiographical work to date.”

Perhaps characteristically, rather than dwell on the microaggression, Pendleton made it the prompt for his broad inquiry into how easily the social urge to categorize takes root and constrains hard-won freedoms.

“Here’s Adam, he’s in his thirties, Black, male — wouldn’t it be nice to live outside of all that?” he said. “And I think that’s what draws us to art; at its best it’s other, it’s outside of those fixed and finite spaces.”

Queerness, Pendleton said, was “the perpetually misunderstood position,” at once precarious but also full of possibility. But even the discourse around queer identity risked hardening into silos. “Has queer theory become an institutional space itself?” he said. That concern, he said, drew him to Halberstam, a transgender professor at Columbia whose recent book, “Wild Things: The Disorder of Desire,” explores living beyond categories.

Halberstam, in a phone interview, described being filmed by Pendleton as a kind of adventure, an intimate process poles apart from conventional documentary. At one point, he said, Pendleton asked him to write 200 words on any subject, then read them. At another, Pendleton asked to film Halberstam naked, in the shower.

The scholar agreed, open to the process. “It was closer to therapy than it was to biography,” Halberstam said. “I think the push for Adam is to get at the unconscious of contemporary politics. He’s looking for these wild unscripted terrains, beneath the surface of socially mandated discourse.”

For all the intellectual bravura, Pendleton’s project carries an undercurrent of melancholy. The MoMA installation includes two paintings from a new series based on a sentence that he coined and then takes apart. It reads: “They will love us, all of us, queens.” But the sentence appears out of order and incomplete.

“The phrase never quite resolves in the space of the painting,” Pendleton said. “And it’s somehow deeply personal and unresolved for me.”

In Richmond, Pendleton said he knew he wanted to cast a Black male actor in front of the statue, then anticipated the obvious query: “Is this a stand-in for me? I’m asking myself that question..”

As much as Pendleton espouses radical indeterminacy, “Who Is Queen?” has landed in a certain time and place — MoMA, in a period of intense questioning by artists and audiences of museums and their allegiances, programming and practices.

In the spring, a series of activist sit-ins and rallies titled Strike MoMA raised issues, from staff cuts to the financial interests of board members and, ultimately, the museum’s very existence as a “monument” to “blood-soaked modernity.”

The poet, critic and theorist Fred Moten, on a video panel, hurled an expletive at the museum. Moten is one of Pendleton’s inspirations, included in the sourcebook that has been produced in lieu of a catalog for “Who Is Queen?”

Now Pendleton’s installation, with its scale and central position, will be MoMA’s most visible exhibition this season. Comer, the curator, saw in this an opportunity. “Museums need to be criticized and rethought from the ground up, and I think Adam is one of the artists who can help us do that.”

Pendleton seemed up for it.

To make an exhibition, he said, is to put a space under pressure — just as Occupy or Black Lives Matter put pressure, in their own ways, on spaces freighted with power.

In a sense, he has built his own museum inside MoMA — an experiment in change from within, offering a radically different method of display from the chronological unfolding of the Modernist canon in the institution’s galleries.

“Can art complicate a politics of love or joy?” he asked. “I have to go into the space of the museum to answer these questions. But my intention is to overwhelm it, to push it to become something else.”