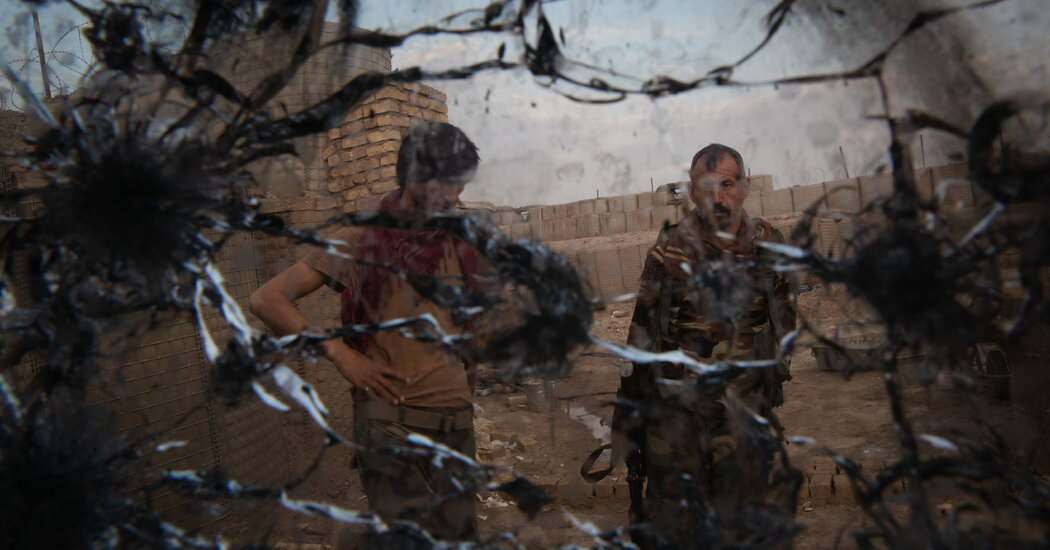 It all happened so fast.

Just a few weeks before Taliban militants triumphantly strode into Kabul last month without a fight as the U.S.-backed government collapsed, the capital seemed a world away from the extremist group’s severe view of an Islamic society. As the weeks went by, however, there were gathering signs of impending crisis, soon to be etched in the faces of concerned Afghans who ultimately decided they had no choice but to flee.

Tyler Hicks, a New York Times photographer, has captured the arc of the Afghanistan conflict through at least 30 assignments since the American-led invasion in 2001 that routed the Taliban. In July he traveled to the western city of Herat, the northern city of Mazar-i-Sharif and the capital of Kabul just weeks before the cities fell, when the anxiety about a Taliban takeover was intensifying. Following is his chronicle of those critical weeks.

A FACADE OF NORMALITY

A photo of President Ashraf Ghani in Kabul in July. Mr. Ghani fled the country on Aug. 15, just before the Taliban entered Kabul.

A relaxed street scene in Kabul, in the weeks before the Taliban would reclaim the capital.

A cafe on the Qargha reservoir outside Kabul in July during the waning weeks before life would abruptly change.

Empty desk stations at Bagram Air Base, abandoned by the Americans and allied forces on July 2. Once Afghanistan’s biggest air base, it was transformed into a ghost town.

The giant airfield at Bagram.

Bagram was once a home away from home for thousands of American troops, with many amenities. It even housed fast-food outlets.

An Afghan national flag flying over Kabul in July. It has since been replaced by the white standard of the Taliban.

A woman and a girl on a Kabul street in July. Soon, many women would cover up or stay inside after the Taliban toppled the government, fearful of the group’s brutal repression of women.

Posters of Marshal Muhammad Qasim Fahim, left, and Ahmad Shah Massoud, central figures in the 1990s-era anti-Taliban resistance known as the Northern Alliance. This summer, the group lost its stronghold in Mazar-i-Sharif to the Taliban.

Despite expectations that it could be weeks or months before the Taliban reached Kabul, some Afghan families decided in July to flee the country via bus, worried that the borders would soon be closed. Their fears would soon prove to be correct.

As the Taliban seized Afghanistan’s border crossings with Pakistan and other neighboring countries in July, departing by road became a race against time.

AS THE TALIBAN NEARED HERAT, PEOPLE FLED EAST TO KABUL

A government security checkpoint in the western city of Herat, just days before it was seized by the Taliban.

Afghan families in Herat boarded buses to Kabul, believing they would be safer there from Taliban rule.

A woman passenger in a car awaiting security clearance at a Herat checkpoint. The Taliban would soon seize the city, Afghanistan’s third-largest.

ON THE NIGHT BUS, HOPING FOR A SAFE OUTCOME

The 480-mile bus ride from Herat to Kabul was preferable at night, when temperatures were cooler. Many buses left after 7 p.m., arriving early the next morning.

People in Herat, fearing an imminent Taliban takeover, boarding buses to Kabul just before the western city fell on Aug. 13.

On a night bus from Herat to Kabul.

AN ANTI-TALIBAN REDOUBT IN THE FINAL WEEKS OF RESISTANCE

Militia fighters in the northern city of Mazar-i-Sharif, once thought to be a bastion of anti-Taliban resistance, received orders for defending the city.

Members of an anti-Taliban militia in Mazar-i-Sharif, a month before the Taliban would overrun their defensive positions and capture the city.

After the Taliban broke through in Mazar-i-Sharif, government security forces and militias fled — including those led by the infamous warlords Marshal Abdul Rashid Dostum and Atta Muhammad Noor — effectively handing control to the Taliban.

NEAR UZBEKISTAN, THE LAST OPEN LAND EXIT BEFORE THE TAKEOVER

Rocks in the road mark a checkpoint near the border with Uzbekistan, north of Mazar-i-Sharif, manned by poorly equipped Afghan militia fighters.

A militia outpost near the Uzbek border, built with blast-resistant Hesco barriers supplied by the U.S. military. Named after the company that developed them, Hesco barriers are filled with rocks and dirt and are seen throughout Afghanistan.

Another view of the militia’s border outpost. Weeks later the Taliban would capture it.

WITHIN WEEKS, A BRIDGE TOO FAR

The Afghan side of the border with Uzbekistan. The Friendship Bridge, used by the retreating Soviet army in 1989, was among the last government-held land crossings to fall to the Taliban.

Computer job vacancies in the US reach 1.2 million

Live Updates: The German Election Is Over. Now Comes the Hard Part.

Sydney Charts a Path Out of Lockdown

Computer job vacancies in the US reach 1.2 million

Hina: Didn’t get cast because I am dusky