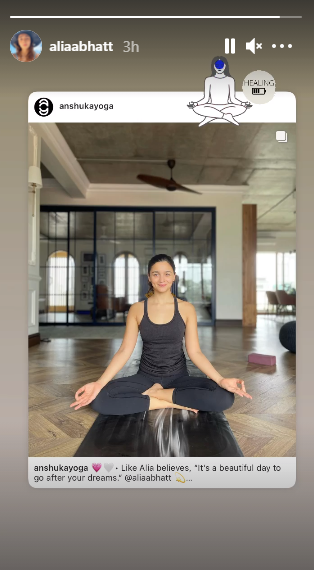 Alia Bhatt often motivates her fans by her posts on Instagram from her yoga and gym exercise sessions. Her dedication towards yoga leaves her fans impressed. Recently, she gave us a glimpse of her Saturday morning routine.
In this photo, Alia can be seen doing the Sukhasana at her home during an exercise session. The star donned a black tank top with matching tights for her workout session. Her hair is pulled back in a pony. Sharing the photo, Alia added a sticker, ‘healing’.

The actress is recently making headlines as her South film ‘RRR‘ . Taking to their official Twitter handle, the makers of the film shared the news with fans. They tweeted, ”Post-production nearly done to have #RRRMovie ready by October’21. But as known to many, we are postponing the release but cannot announce a new date with theatres indefinitely closed. We will release at the earliest possible date when the world cinema markets are up and running.”

The film stars Ram Charan, Jr NTR, Ajay Devgn, Samuthirakani, Ray Stevenson, Olivia Morris and Alison Doody. The film will reportedly be a fictional story set in the 1920s pre-independent era and will be based on the lives of two celebrated freedom fighters- Alluri Sitarama Raju and Komaram Bheem.

The makers had pushed the release date to October 13 this year, but due to the theatres not being fully functional, the makers have postponed this date too.