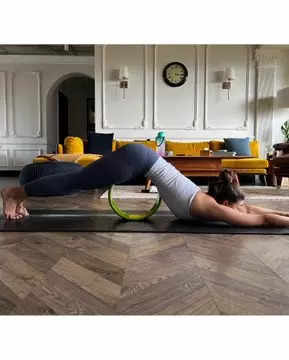 Alia Bhatt kick-started Monday morning with yoga and her pictures are sure to give you some major workout goals.
Striking an extended puppy pose using the yoga wheel, Alia is seen performing the exercise with utmost concentration. Dressed in a grey top and yoga pants, she looked pretty as a peach. 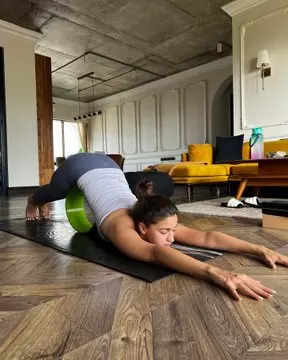 Alia Bhatt’s Instagram handle gives her fans a sneak peek into her personal life and lifestyle. She is also often seen interacting and entertaining her followers with her posts.
On the personal front, she is currently dating Ranbir Kapoor and is rumoured to be tying the knot soon. Their mushy pictures on social media are a treat for the sore eyes of their fans.

On the work front, Alia will be seen sharing the screen space with her beau Ranbir for the first time in Ayan Mukerji’s ‘Brahmastra’. The movie will also feature Amitabh Bachchan, Nagarjuna Akkineni, Dimple Kapadia and Mouni Roy in key roles.

Apart from this, Alia also has Sanjay Leela Bhansali’s ‘Gangubai Kathiawadi’ and SS Rajamouli’s ‘RRR’ with Ajay Devgn and others. She has also been roped in for her mentor Karan Johar’s magnum opus, ‘Takht’ that also stars Ranveer Singh, Kareena Kapoor Khan, Vicky Kaushal, Bhumi Pednekar, Janhvi and Anil Kapoor in lead roles.

The actress will also be reuniting with her ‘Gully Boy’ co-star Ranveer in ‘Rocky Aur Rani Ki Prem Kahani’. The film brings together Dharmendra, Jaya Bachchan and Shabana Azmi in key roles.