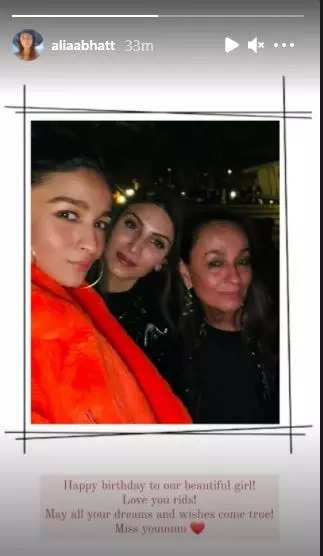 Actress Alia Bhatt took to her Instagram handle to pen down the sweetest birthday wish for her boyfriend Ranbir Kapoor’s sister Riddhima Kapoor Sahni who turned a year older today.
Sharing an adorable throwback selfie featuring herself with Riddhima and her mother Soni Razdan from one of their family holidays, Alia poured her heart out for the birthday girl. She wrote, “Happy Birthday to our beautiful girl! Love you Rids! May all your dreams and wishes come true! Miss Youuuu.”

Riddhima jetted off to Udaipur for the birthday celebration with her family, including husband Bharat Sahni and their darling daughter Samara. Later, mother Neetu Kapoor joined them for the big birthday bash. However, brother Ranbir Kapoor will not be joining the celebration as he is currently shooting for Luv Ranjan’s next in Delhi. Interestingly, Alia is also not joining the Kapoor family in Udaipur with Ranbir for the special day.

Much like Ranbir, Alia is keeping herself busy with a long list of upcoming projects in her kitty.

While she is waiting for the release of ‘Sanjay Leela Bhansali’s ‘Gangubai Kathiawadi’, she also has Ayan Mukerji’s much-awaited ‘Brahmastra’ co-starring Ranbir Kapoor.

Apart from these, Alia recently wrapped up filming for her yet another upcoming film ‘Darlings’. She will reportedly start working for Karan Johar’s next ‘Rocky Aur Rani Ki Prem Kahani’ with Ranveer Singh.

If these weren’t enough, she will also mark her Tollywood debut with filmmaker S.S. Rajamouli’s magnum opus ‘RRR’.