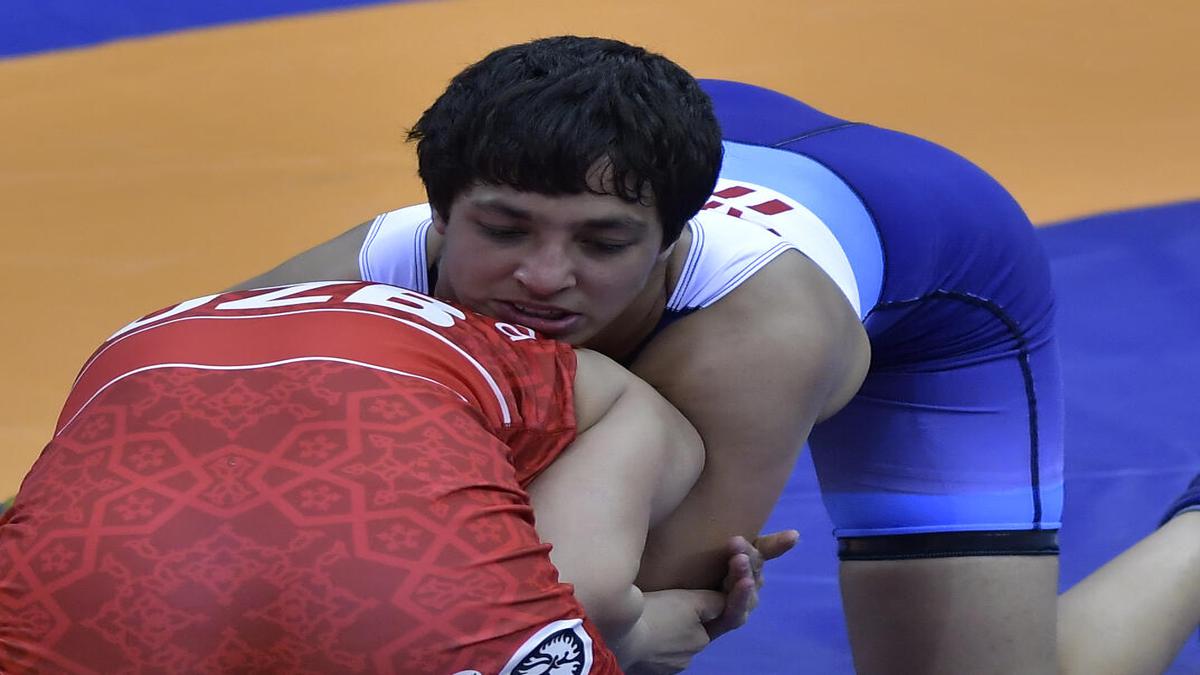 Anshu Malik created history on Wednesday  by becoming the first Indian woman wrestler to reach the World Championship final when she outclassed junior European champion Solomiia Vynnyk even as Sarita Mor lost her semifinal after shocking world champion and will fight for a bronze here.

The 19-year-old Anshu, the reigning Asian champion, controlled the semifinal from the beginning and won by technical superiority in the 57kg category to go into history books.

“It’s extremely satisfying. I am so happy. It feels so good. What I could not do at the Tokyo Games I did that here. I fought each and every bout as my last bout,” said Anshu after making the final.

“The month after the Tokyo Games was very tough. I could not perform as I had wanted at the Games. I suffered an injury (elbow) and can’t explain how much pain I endured one month before the World championship.

“I trained hard for this, I wanted to give my 100 per cent and will fight final like my last bout,” she said. Anshu had lost her first round bout and also repechage round at the Tokyo Olympics.

India has only one world Champion in Sushil till date and Anshu can create another history on Thursday.

Anshu’s win also ensured India’s first medal from this edition of the event.

Meanwhile, Kiran (76kg) won her repechage round against Turkey’s Aysegul Ozbege in the morning session to reach the bronze play-off but could not convert the chance into a medal following a 1-2 defeat against 2020 African champion Samar Hamza.

Anshu was clever with her moves. At least thrice, she effected take-down moves from the left of Vynnyk and finished the bout with an exposure move. The Nidani girl started competing in the senior circuit only from last year and has made a steady progress since then. She also had qualified for the Tokyo Olympics.

Earlier, she was hardly troubled by Kazakhstan’s Nilufar Raimova, whom she beat by technical superiority and later outwitted Mongolia’s Davaachimeg Erkhembayar 5-1 in the quarterfinals.

– Sarita to fight for bronze –

Seasoned Sarita Mor shocked defending champion Linda Morais 8-2 in her opening bout and beat Germany’s Sandra Paruszewski 3-1 in the quarterfinals. Up against the reigning European champion from Bulgaria Bilyana Zhivkova Duodova, Sarita fought her heart out but lost 0-3. She will now fight for a bronze.

The reigning Asian champion had a tough opening bout against the 2019 World champion from Canada but came out trumps with a tactical 8-2 win in the pre-quarterfinals.

A quick take-down move, followed by an expose together with some superb defence put Sarita 7-0 ahead by the time the first period was over. The only scoring point she conceded was a take-down move in the second period. She did not let Linda play her game, keeping her in lock positions.

Later, the quarterfinal against Paruszewski turned out to be a tougher bout, in which the two wrestlers were largely restricted to standing fight which took a lot out of them. There was only one point-scoring move, a take down effected by Sarita late in the match and that sealed the outcome.

In the 72kg, Divya Kakran stunned Kseniia Burakova with a ‘win by fall’ but lost by technical superiority to Japan’s Under-23 world champion Masako Furuich. The 2020 Asian champion Divya fought her heart out in both the bouts and wriggled out of difficult positions umpteen times but hurried moves and over aggression cost her the quarterfinal against the Japanese.

Ritu Malik (68kg) was blown away by Ukraine’s Anastasiia Lavrenchuk in the qualification bout that lasted only 15 seconds. It seemed Ritu was carrying a knee injury.