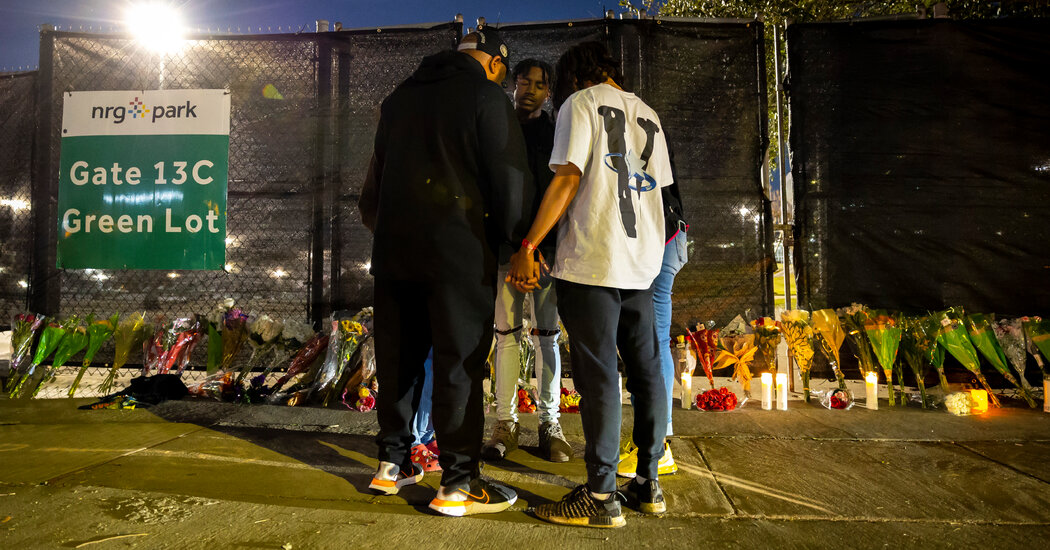 On Dec. 3, 1979, a crowd amassed outside Riverfront Coliseum in Cincinnati for a concert by the Who. The show was booked without seat reservations, giving early-bird fans the chance to rush toward the stage. In the confusion outside the venue, 11 people were crushed to death.

In response, Cincinnati banned that kind of general-admission model, sometimes called festival seating, and the incident served as a reminder of the inherent danger when pop music is mixed with big crowds.

Cincinnati’s ban was lifted in 2004, just as a new, lucrative era of music festivals was taking off, led by events like Coachella, that were modeled after European festivals where fans roamed free and took in attractions on multiple stages.

But through the years a series of disasters at concerts, clubs and festivals have served as reminders of the dangers of crowds, like the death of nine people at a Danish festival in 2000, or a stampede at a nightclub in Chicago in 2003 that left 21 dead.

Those fears were rekindled again with Travis Scott’s Astroworld festival in Houston last Friday, where nine people died and more than 300 were injured, at a packed event that drew 50,000 people to NRG Park.

For now, more questions than answers surround Astroworld, including how well the festival’s security plan was followed and why it took nearly 40 minutes to shut the show down after Houston officials declared a “mass casualty event.” The Houston police are conducting a criminal investigation, and dozens of civil lawsuits have been filed against Mr. Scott and Live Nation, the festival’s promoter, among other defendants.

The event, and the finger-pointing in response, seemed all too familiar to Paul Wertheimer, a concert security expert and longtime critic of the industry. He began his career investigating the Who disaster and has since documented thousands of safety incidents at festivals and concerts; his research has included hours studying the dynamics of mosh pits.

“I’ve been living this recurring nightmare, what happened in Houston, for 40 years,” he said in an interview. “I’ve seen it over and over again.”

The Astroworld disaster has already ignited debate about the safety of festivals, just as the industry has finally seen the return of large-scale touring after more than a year of dormancy during the pandemic.

To critics like Mr. Wertheimer, Astroworld is yet another sign that concert promoters prioritize profits over safety. The concert industry sees it differently, arguing that the rarity of serious problems given the many thousands of events that go on without major incident each year proves that most shows are perfectly safe, and that expertise has been developed to protect the public.

Live Nation, the world’s largest concert company, put on some 40,000 shows of various sizes in 2019, the most recent year that it had a full slate of events. Deaths and major injuries are rare, and when they do occur they often involve factors like drug overdoses.

Still, the impact of the deaths in Houston are already being felt in the industry, as executives calculate the increased costs and heightened security measures they expect will be required in the future to avoid becoming the next Astroworld.

Randy Phillips, the former chief executive of AEG Live, a concert giant that counts Coachella among its portfolio of festivals, said that for shows he is planning on his own as a promoter, “we are oversecuring and overinsuring all participants in a way we probably wouldn’t have pre-Astroworld.”

Until the criminal investigation is completed, and courts sort out liability in the civil suits, it may be unclear just what steps festivals promoters and concert venues should take to prevent a recurrence. But few doubt there will be repercussions that will affect insurance, security, government regulations and contractual agreements among promoters, performers, venues and various third parties like security firms.

In a statement, Live Nation said, “We continue to support and assist local authorities in their ongoing investigation so that both the fans who attended and their families can get the answers they want and deserve.” The company declined to comment further.

For Live Nation and other promoters, festivals have become an important moneymaker. The day before the Astroworld disaster, in a conference call with analysts to announce Live Nation’s third-quarter financial results, Michael Rapino, its chief executive, said that when the company controls all revenue streams for a festival, “it’s our highest-margin business.”

Crowd-control plans are an essential part of those events, and have evolved over the last two decades or so as festivals have become a key part of the touring industry.

To manage general-admission events, long barriers known as crowd breaks are usually deployed to divide large spaces into smaller zones that contain as few as 5,000 patrons, reducing the risk of overcrowding, Mr. Phillips said. Other practices have emerged, like the use of counterprogramming on multiple stages, with overlapping set times, to prevent the full force of a festival audience from piling into one place at the same time.

It is unclear how well those lessons were implemented at Astroworld.

In an appearance on NBC’s “Today” show on Tuesday, Samuel Peña, the Houston fire chief, said that barricades had been used to prevent the crowd from surging forward, but the movement of the crowd toward the stage “in essence caused other areas of pinch points.”

“As the crowd began to surge and push and compress toward the front,” Mr. Peña said, “it was those people in the center that began to get crushed and the injuries started.”

Astroworld has also stood out for the role of Mr. Scott, the festival’s creator and star attraction. A chart-topping rapper and entrepreneur, he has developed a reputation for putting on chaotic, high-energy shows, even encouraging fans to sneak in. Twice before, Mr. Scott has been arrested and accused of inciting crowds at his shows, and pleaded guilty to minor charges.

At one point last Friday, Mr. Scott paused his set to take note of an ambulance in the crowd. But what he knew about the extent of danger in the crowd will surely be a central point in the investigation and the civil suits.

The relative lack of injury at most big events has led concert executives to defend what they do as safe.

Carl Freed, the promoter of the Hot 97 Summer Jam, an annual hip-hop festival at MetLife Stadium in New Jersey, called Astroworld “a horrible tragedy,” and added: “But there’s been a great deal of thought put into the safety of patrons. Always has been, always will be.” Summer Jam, which has assigned seating, has had a number of incidents over the years involving fans trying to push their way through security and sometimes scuffling with police.

The history of trouble with overcrowding goes back to the very beginning of rock ’n’ roll. In 1952, the disc jockey Alan Freed’s “Moondog Coronation Ball” in Cleveland was shut down by police after up to 25,000 fans showed up for an arena that could hold just 10,000.

And a number of events have turned deadly. In 1991, three teenagers were trampled to death at an AC/DC concert in Salt Lake City. That same year, nine people died in a stampede outside a benefit basketball game at City College in New York that was presented by a young rap promoter, Sean Combs. In one of the highest-profile disasters in recent years, 21 people died in 2010 when crowds of thousands were forced to pass through a narrow tunnel on the way to the Love Parade, a festival in Duisburg, Germany.

The rise of big outdoor festivals in the late 1960s helped establish rock as a paramount cultural force, but the problems at Woodstock (gate-crashing; traffic and sanitation failures) and Altamont (a fan’s death at the hands of a Hells Angels security crew) frightened local governments around the country, which passed public gathering laws that stunted the growth of American festivals for decades.

Brian D. Caplan, a lawyer who is not involved with the Astroworld suits, said that it may take courts time to establish which parties face liability, but that the history of dangers and violence at concerts serves as fair warning to promoters that steps must be taken to protect the public.

“These happen sporadically, but all large promoters would know that an event of this nature could happen,” Mr. Caplan said. “They do the best they can to ensure these things don’t happen, but when they do it’s difficult to escape some form of liability for the consequences.”

Viewing the footage of Astroworld, Mr. Wertheimer said that the deaths could have been prevented simply by reducing the density of the crowd. But with the popularity and profitability of festivals, he doubted that would happen.

“It’s going to be business as usual after this in Houston,” he said, “unless officials rise up and try to protect their communities.”