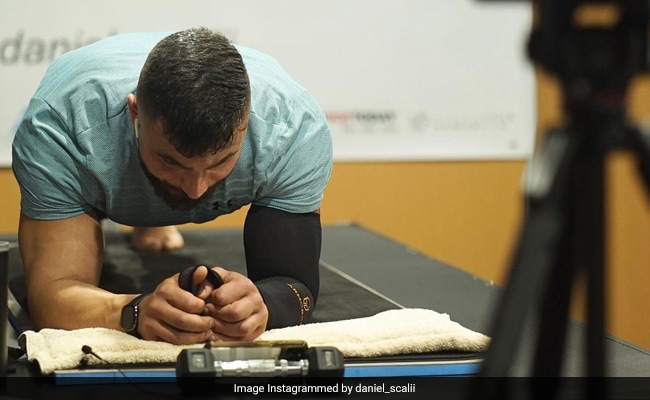 Daniel Scali set a world record for the longest plank

With the pandemic sweeping the world, there is a renewed focus on building strength – physically as well as mentally. Both these strengths come in large part from maintaining a high level of fitness and working on ourselves. In this effort, a Guinness World Record set by an Australian man recently has come as a welcome motivation. Daniel Scali has set the record for the longest time in the abdominal plank position by a male with an “unbelievable time” of 9 hours 30 minutes and 1 second, said the record keeper. The plank is a core strength exercise, which requires a person to maintain a position similar to a push-up for maximum time.

It’s intense and requires a steely determination as it puts constant pressure on the elbow and the forearm and the shoulder. A video shared by Guinness World Records showed how Mr Scali remained focused on the goal despite what he said was “a little bit of vibration and shaking” in his body after the 7-hour mark.

Mr Scali’s successful effort becomes more impressive after knowing the fact that he suffered from complex regional pain syndrome (CRPS) in his left arm after a fall from a tarpaulin at the age of 12. Knowing his limitations, Mr Scali prepared himself in advance for the record attempt. He spent hours in the gym, doing push-ups and sit-ups, to get his “body conditioned for the plank.” But mental strength was also crucial for success. So, he took the help of a mind coach.

“Anyone can do anything if you put your mind to it. Just believe and be grateful for it. I promise you,” Mr Scali told the record keeper.

The record-breaking feat has been well-received by netizens, who are showering him with unconditional praise. The video has been liked by more than 3.50 lakh users.

“This is a massive achievement for the CRPS community. Thank you for showing your strength and courage in the face of pain. One warrior to another,” wrote a user.

Some wondered how Mr Scali managed to do this.

Another said, “I can’t even sit in the same place for that long, props to him. Congrats.”

Some of them already started thinking about who would break Mr Scali’s record? “Who is gonna plank for 9 hours, 30 mins and 2 seconds to beat his record?” said a user.

Some were so inspired by Mr Scali’s resilience to beat the pain that they also wanted to plank. “Let’s try this,” read one of the comments.