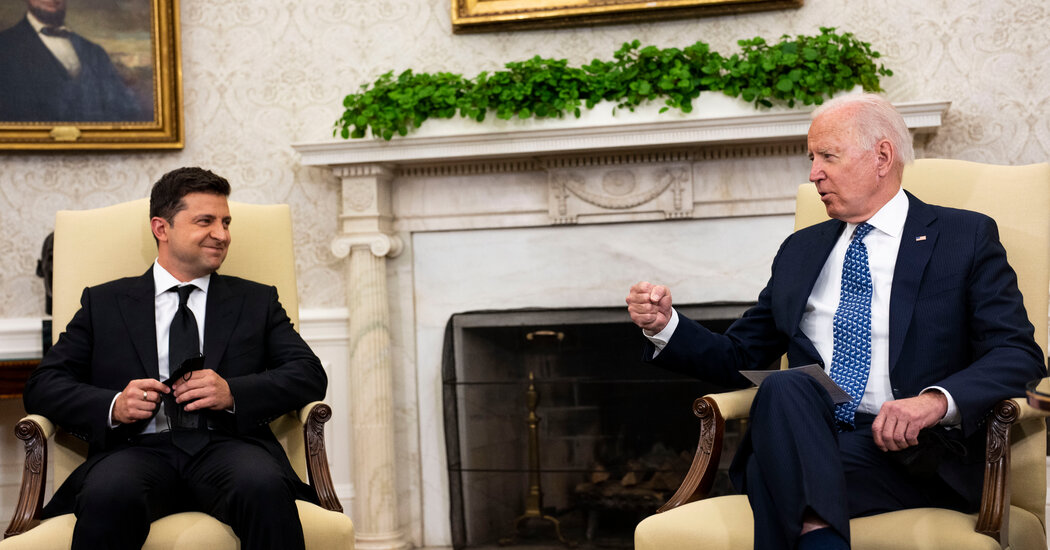 WASHINGTON — President Biden on Wednesday assured Ukraine’s president that the United States remained opposed to “Russian aggression” in the region, using an Oval Office meeting to affirm his support for a leader unnerved by America’s chaotic exit from Afghanistan.

The meeting with President Volodymyr Zelensky of Ukraine also allowed Mr. Biden to send a message to Russia that he was committed to standing by a strategic partner that Moscow has invaded.

“The partnership between our nations grows stronger and its going to become even stronger,” Mr. Biden said, noting the two countries had a “similar value system” that included a commitment to a Europe that was “whole, free and at peace.”

Despite a delay of a few days, due in part to the unfolding crisis in Afghanistan, Mr. Zelensky finally got the Oval Office reception he had been seeking since his election in 2019. His earlier efforts to secure such a meeting with President Donald J. Trump led to Mr. Zelensky unwittingly becoming entangled in an international incident that led to Mr. Trump’s first impeachment trial.

Mr. Zelensky, for his part, thanked the United States for a new $60 million defense aid package and said he wanted to focus on security issues, including the Russian occupation of Crimea.

Speaking through a translator, he expressed condolences for the 13 U.S. service members killed last week in Afghanistan. “We are very compassionate, since we have been dealing with such tragic losses for eight years in a row,” Mr. Zelensky said, referring to those killed fighting in eastern Ukraine against Russian-backed separatists.

During the meeting, Mr. Biden also told Mr. Zelensky that he wanted to travel to Ukraine, which no American president has visited since President George W. Bush in 2008. Mr. Biden visited Ukraine regularly as vice president.

A show of support may be necessary. Ukrainians have been discouraged as they have watched America’s unruly and abrupt exit from Afghanistan. “Their worry is that commitments, understandings and confidence that they’ve had from and with the United States could be jeopardized by this,” said William B. Taylor Jr., who served as U.S. ambassador to Ukraine between 2006 and 2009, and who was a star witness during Mr. Trump’s first impeachment trial.

“They almost desperately want to believe that the longtime support for Ukraine, over administrations of all kinds, is going to persist,” he said. “But they can’t help but be concerned when they see the United States quickly, and with some disarray, pulling out of a country where we’ve been for 20 years.”

Mr. Biden’s objective ahead of the meeting was to demonstrate a clear commitment to Ukraine’s sovereignty, officials said. The decision to allow Mr. Zelensky to be only the second European leader to visit the White House since Mr. Biden’s inauguration sent a strong signal that Ukraine remains a priority for the administration.

Supporting Ukraine is critical for an administration that has made strengthening democratic norms at home and abroad as a key objective, foreign policy experts said.

Mr. Biden also signed off on a new $60 million aid package with Ukraine that included Javelin anti-armor missiles and other lethal weapons, an official said, and announced new agreements on security, energy and climate coordination after bilateral meetings with the visiting Ukrainian delegation.

The Biden administration has now provided more than $400 million in security assistance to Ukraine this year, an official said.

The Trump administration also provided lethal weapons to Ukraine, reversing a decision not to do so by the Obama administration, when Mr. Biden was vice president. Former President Barack Obama limited American aid to Ukraine to “nonlethal” items like body armor, night-vision goggles and first aid kits, to avoid tempting President Vladimir V. Putin of Russia to raise the stakes.

The Biden administration was also expected to sign a revised strategic defense framework to boost cooperation on security, cybersecurity and intelligence sharing, setting the stage for closer cooperation that will improve the capabilities of the Ukrainian military, officials said.

Overall, however, Mr. Biden’s record on Ukraine has been mixed, experts said. The administration dropped its efforts earlier this year to block the completion of the Nord Stream 2 pipeline, which will transport natural gas directly from Russia to Germany, allowing Russia to bypass Ukraine and deprive it of revenue from transit fees.

In a joint statement released after the meeting, both countries stated that they “continue to oppose Nord Stream 2, which we view as a threat to European energy security.”

The Biden administration has also not yet announced a nominee to serve as ambassador to Ukraine, a position that has remained vacant since 2019 when Marie L. Yovanovitch was ousted from her job for apparent disloyalty to Mr. Trump.