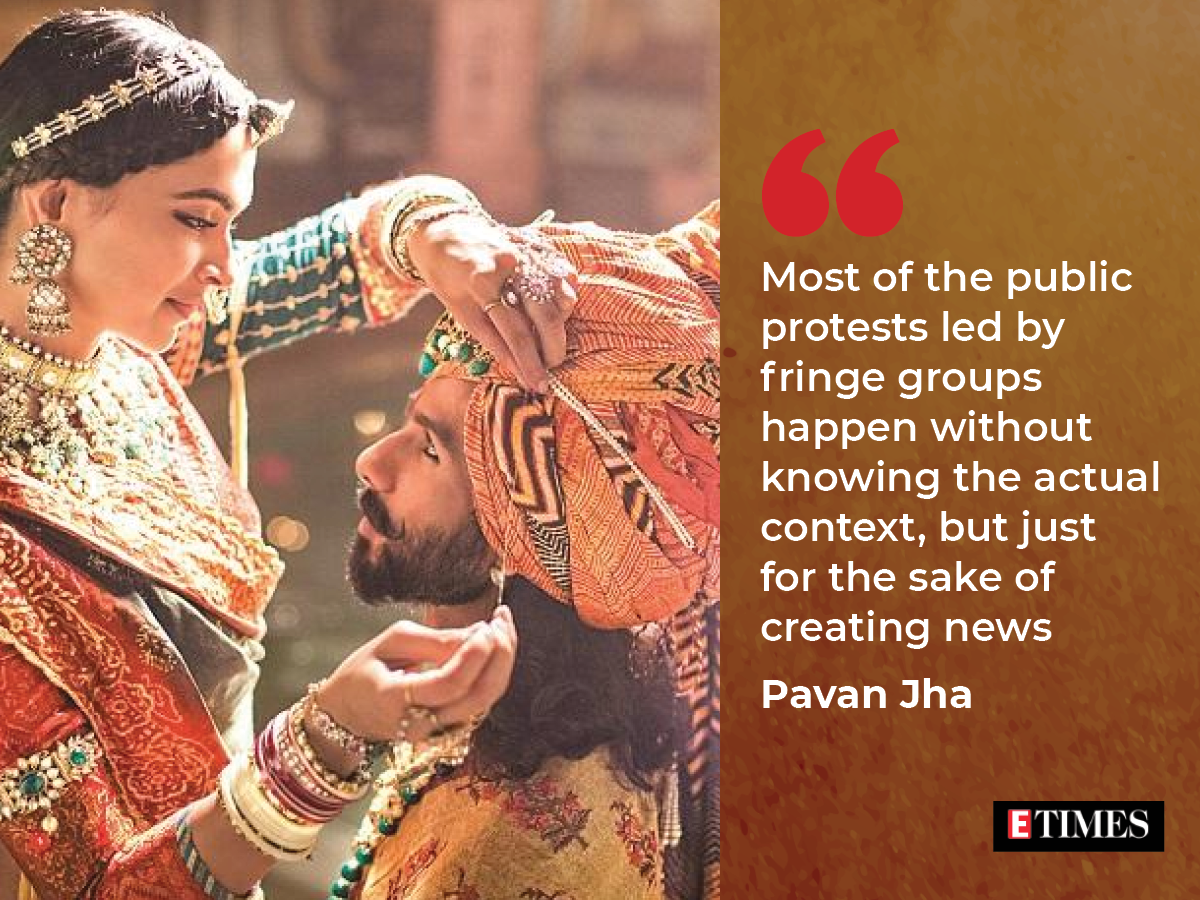 What’s in a name?
That which we call a rose
By any other name would smell as sweet.

These lines by William Shakespeare are still relevant, more so, to a current trend in the world of movies. But clearly not so much for the fringe groups, who, time and again, have arm twisted Bollywood filmmakers to cave into their demands for a film’s title change. The latest on the target is Akshay Kumar and Manushi Chhillar starrer historical drama ‘Prithviraj’. In case you missed the memo, the title of the film, based on the life of Rajput king Prithviraj Chauhan has irked some sections of society, and Akshay Kumar and producer Aditya Chopra have faced threats on multiple occasions.

First, Akhil Bhartiya Kshatriya Mahasabha objected to the name of the film, terming it an insult to the great ruler. Shantanu Chauhan from the youth wing of the organisation said, “The insult of the great brave warrior Emperor Prithviraj Chauhan ji, who protected the nation and Hinduism, is an insult to every citizen of India. The title of Yash Raj produced film ‘Prithviraj’ directed by Chandraprakash Dwivedi is an insult to the great Hindu emperor. It is condemnable and insulting to not address such a great warrior and a brave son of India by his full name.” They demanded the title of the film be changed and the script approved by senior representatives of the Kshatriya Samaj.

Following this, Karni Sena threatened the filmmakers with consequences similar to that of Sanjay Leela Bhansali’s ‘Padmaavat’, if their demands were not met. Filmmaker Surjeet Singh Rathore, president of the youth wing of the Karni Sena put up three conditions for the film which included, ‘screening of the film before its release’, ‘the film be shown to the Rajput society’, and the ‘title of the film to have the full name — Veer Yoddha Samrat Prithviraj Chauhan’.
‘Padmaavat’, ‘Laxmii’, ‘Goliyon Ki Rasleela: Ram-Leela’ and many other films have previously faced the wrath of the fringe elements.

What is it that offends these fringe groups so much about Bollywood film titles and their content? Come to think of it, we’ve had historical films like ‘Gandhi’, ‘Chandragupta’, ‘Asoka’, ‘Sardar’ and many more in the past. But such instances of demands and threats have only become frequent in recent times. In this week’s #BigStory, we find out answers to where all this began, what is so offensive about these titles, what the industry thinks about it and more.

What’s in a title?


As mentioned earlier, there have been numerous films based on history that have had titles minus the honorary prefix. But how justified is it to issue a diktat assuming a legendary personality has been insulted? A senior filmmaker in conversation with ETimes, on condition of anonymity, says, “The film ‘Chandragupta’ (1934) was not titled Samrat Chandragupta Maurya, ‘Asoka’ (2001) was not titled Samrat Asoka Maurya. ‘Gandhi’ (1982) did not have Mahatma, ‘Sardar’ (1994) was not titled Sardar Vallabhbhai Patel. ‘Mandela’ (2021) was not titled Nelson Mandela. Whether to add an honorary title or not, watch the film and then you will realise. It’s like you’re banning a book even before it’s written.”


Talking about the film in question, ‘Prithviraj’ isn’t the first film made on the life of the Rajput warrior king. “There was a film titled ‘Prithviraj’ that was made in 1931, directed by RN Vaidya. There were two other films with the title ‘Prithviraj Samyukta’. In 1942, there was a Tamil film by the name ‘Prithvirajan’. Going further back, there were two books on the medieval period with the titles ‘Prithviraj Raso’ and ‘Prithviraj Vijaya’. Every library in India has these books. Did it never strike the writers that we should write something else ahead of their names? In their perspective, they were not disrespecting Prithviraj. When you write a biography or history, every word does not have Samrat and Chauhan,” argues an industry insider.

Such protests did not surface earlier. Interestingly, when the teaser of the film first came out in 2019, nobody even took notice!

Why do they do it?


Filmmaker Mukesh Bhatt opines targeting Bollywood is an easy way to gain publicity. “They get public attention. All these independent organisations are just riding to promote their agenda by attacking Bollywood. It has become free for all, and the government has to do something about this nuisance, because it’s not good for society,” he says.

Historian Pavan Jha adds, more than being offensive, it suits their politics, and unreleased films are an easier target. “A lot of new groups use it as an opportunity to get media and public attention that may help their brand of politics of religion and caste. Probably easiest to protest when the end product is not ready/seen/available for the public. Social media acts as a perfect playground as Bollywood buzz is its fuel,” he says.


With barely any resistance noticed earlier, to most of the recent films being scrutinised even before release, what led to this change in audience behaviour?

“I don’t think people cared that much in the earlier times in the pre-social media age, as they were mostly exposed to the films after the release and most of the protest cases we see are only after release. Shah Rukh Khan-Irrfan Khan’s film ‘Billu Barber’ caught the eye only around the release, and the name was changed to ‘Billu’ at the last moment. Nowadays, a film gets a lot of buzz during its making itself and gets a lot of public attention. Most of the public protests led by fringe groups happen without knowing the actual context, but just for the sake of creating news,” adds Pavan Jha. 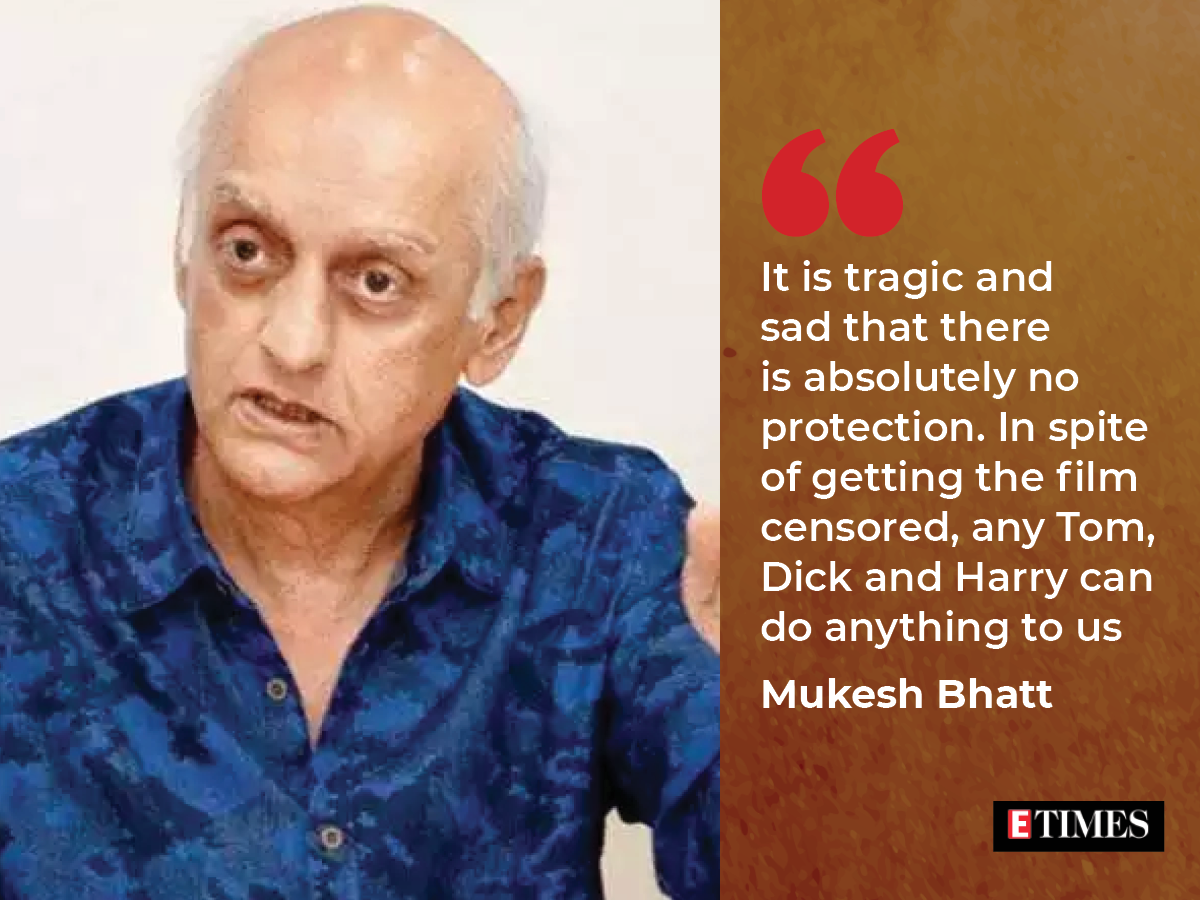 Highlighting that such incidents are happening a lot over the last decade, Mukesh Bhatt questions why people are ‘creating a mountain out of a molehill, when the Censor Board has passed the film’. “All these problems started since 2010, things went completely downhill. It is tragic and sad that there is absolutely no protection. In spite of getting the film censored, any Tom Dick and Harry can do anything to us,” he says.

‘Why threaten producers, when you can go to court?’


While every citizen of the country has a right to have an opinion and freedom of speech, arguments should have solid proof, believes a source close to the project. “One can write to the PM, one can write to court or even CBFC. But there are some basic limitations. If you say that we will set the country on fire, or throw acid, it’s a violation of boundaries. Also whether a title is right or wrong, who is to decide this and on what basis? One can go to the court, and in the end we will have to abide by the court’s verdict. If someone has insulted a personality and it is proven in court even after the film’s release, they will be punished,” says the source.

Role of media and social media


While the outrage is carried out by fringe groups, some believe media and social media have a big role to play in amplifying such incidents. On one hand, the news media has the responsibility to publish thoroughly researched and fact-checked reports, even individuals should exercise restraint from spreading fake news and outrage on social media. 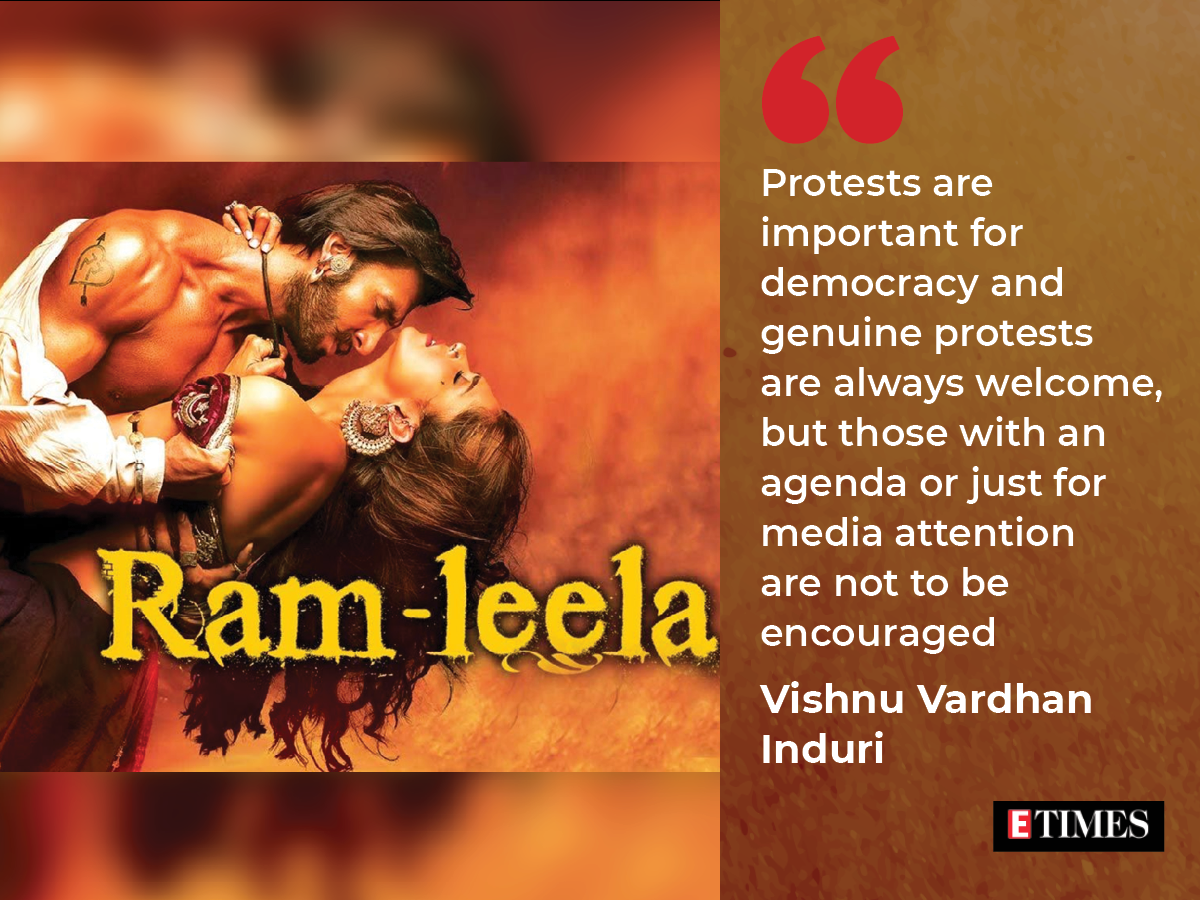 Producer of films like ‘83’ and ‘Thalaivii’, Vishnu Vardhan Induri says, “There is too much media attention these days. Earlier there were fewer newspapers, only one national news channel and no social media. Because of the demand for too much news, even the slightest protest is getting undue visibility which is encouraging the fringe groups. If there is no media exposure, no one would even bother to protest. Secondly, social media is giving the opportunity for every average Joe to talk whatever he wants even without showing his face. Trolls are again given so much importance by the media. Media should act more responsible and not sensationalise every small thing for the sake of TRPs or eyeballs. Protests are very important for democracy and genuine protests are always welcome, but the protests with an agenda or just for media attention are not to be encouraged or entertained.”

A source close to ‘Prithviraj’ explains how the minutest detail is being debated on social media. “People are debating whether Sanyogita should sit ahead of Prithviraj or behind. What is the basis of the debate? Have they read the books? A historian was asked where did Sanyogita sit – ahead or behind? If you’d read, you’d know she is sitting behind in the book. There is a reason, but people write anything on social media. Some say, Sanyogita should wear a nose ring. But do they know if it was even there, is there any historical proof? There is no evidence. Any filmmaker does their job well, they do a lot of research. But no one cares,” he says.


When we talk about a great personality, people tend to associate it with a region. This new wave of regionalism is a result of the political environment, believe the industry insiders. 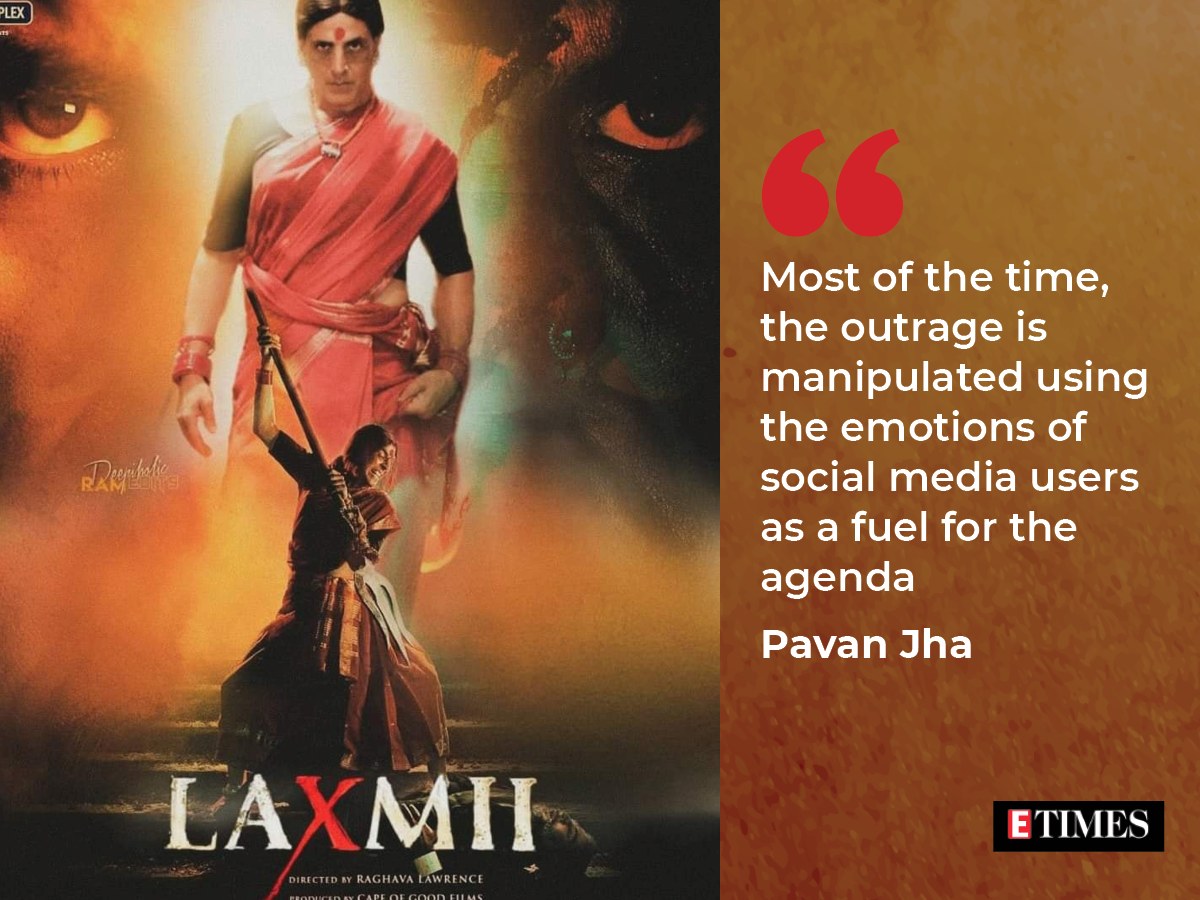 Historian Pavan Jha says, “A lot has changed after the advent of social media, with people getting information in near real-time and also using social media as a collaborative platform for outrage. Most of the time, the outrage is manipulated using the emotions of social media users as a fuel for the agenda. This is an extremely dangerous tool for the vested interests, and needs to be combated with extreme seriousness.”

What does this say about our society as a whole?

Historian Kapil Kumar who was invited by the CBFC to watch ‘Padmaavat’ had found glaring factual inaccuracies in the film. But he says he does not find the title ‘Prithviraj’ offensive at all. “When intolerance increases in the society and certain kinds of threats emerge in the society, they create a reaction. And in that reaction, one starts analysing. Cinema does not depict history correctly, but this can’t be generalised. The aim here is not to depict history, the aim is to make money… it is business through entertainment,” he adds.

The Censor Board perspective


Former Chairman of the Censor Board of Film Certification (CBFC), Pahlaj Nihalani says he was upset when the title of ‘Padmaavat’ was changed. “Once censored, no one has the right to change anything. The copyright has been registered for ‘Prithviraj’. It’s a film passed as historical fiction. After certification, one can’t change the title as per law,” he informs. 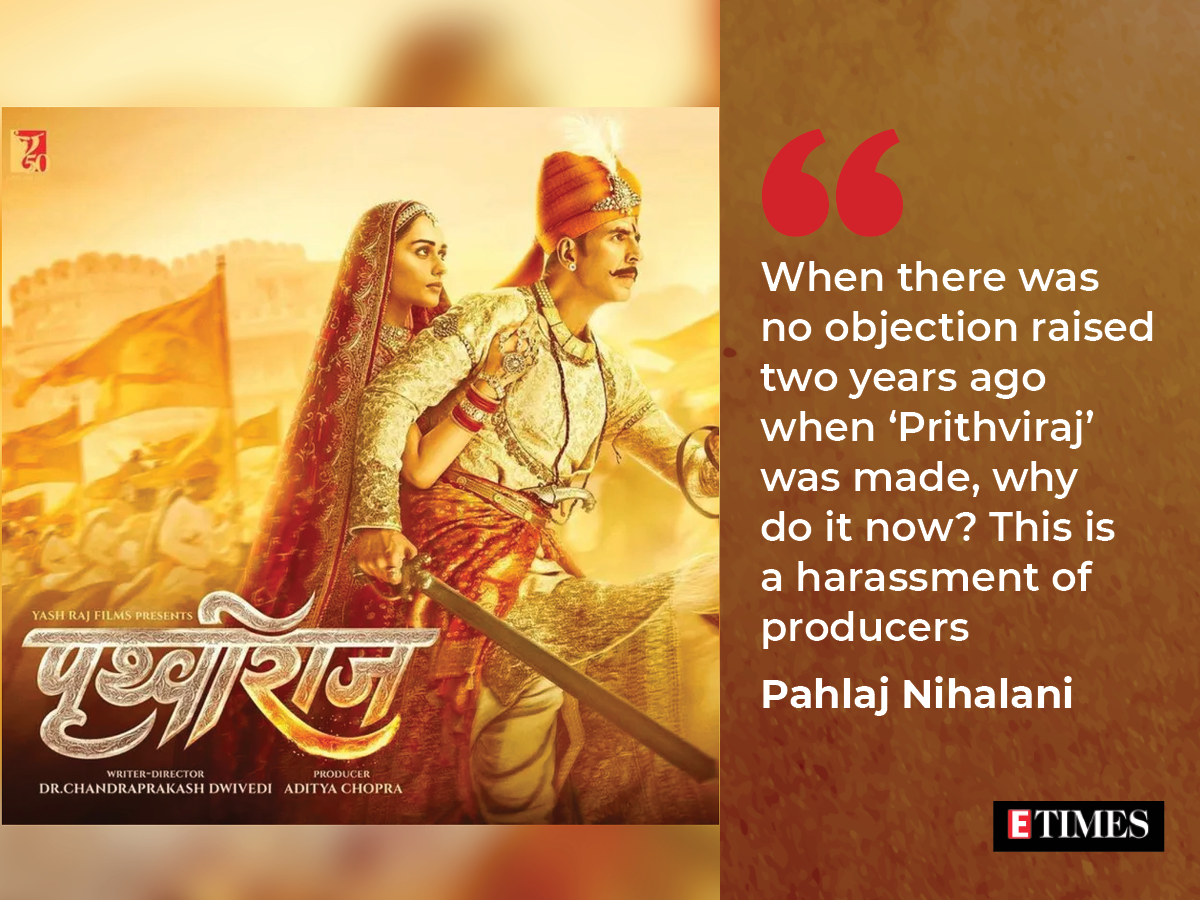 The title of ‘Prithviraj’ was registered about two years ago and the release was delayed because of the pandemic. When there was no objection raised then, why do it now, questions Nihalani. “It is a harassment of producers and it’s my request to these organisations to stop this practice. The issue is growing, it needs to be stopped,” he concludes.

Kirti on her B’Wood career taking a turn