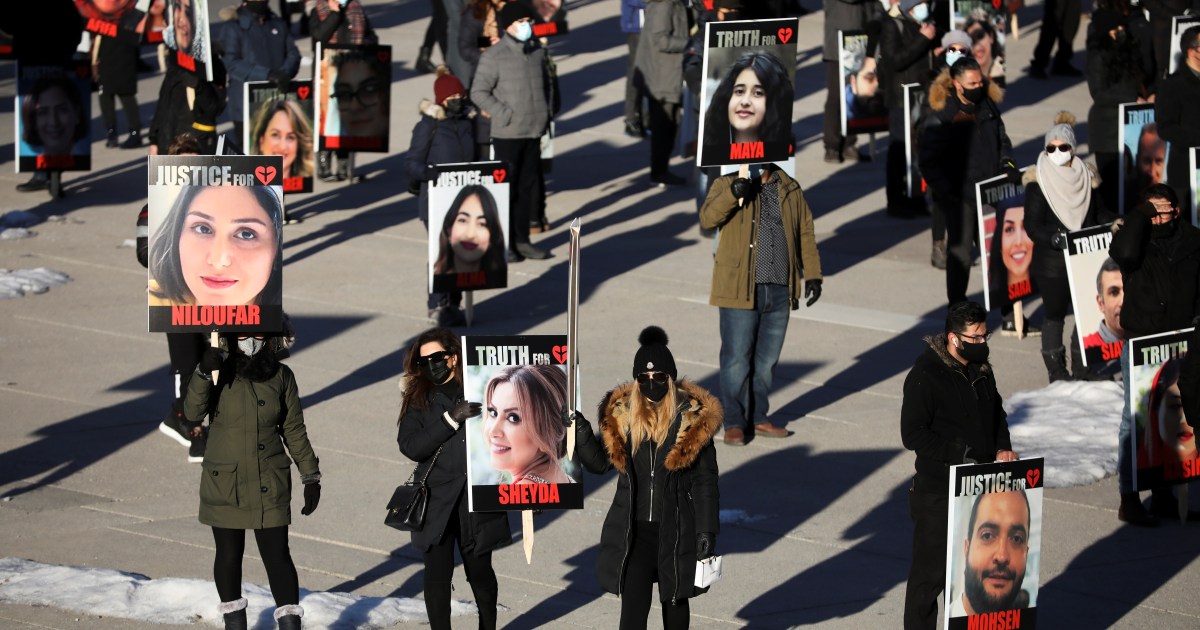 Default judgement comes as Iran insists plane was downed near Tehran in error in 2020 amid military tensions with US.

A Canadian court has awarded $84m (107m Canadian dollars) to the families of six victims who were killed when Iranian forces shot down a Ukraine International Airlines flight near Tehran in early 2020.

Mark Arnold, a lawyer for the victims, announced the ruling on Monday, vowing to go after Iranian assets in Canada and abroad to obtain the judgement. Justice Edward Belobaba of Ontario’s Superior Court had issued the ruling in a default judgement on December 31.

Iranian forces shot down Flight PS752 after it took off from Tehran’s Imam Khomeini International Airport on January 8, 2020, killing all 176 people on board, including 55 Canadian citizens and 30 permanent residents.

The Iranian government blamed the incident on “human error”, saying that the plane was mistaken for a “hostile target” in a “disastrous mistake“.

Hours before the flight was shot down, Iran’s military fired missiles on United States forces in Iraq in retaliation for the killing of top Iranian General Qassem Soleimani in a US strike ordered by then-President Donald Trump.

Following the crash, the victims’ countries – Canada, Ukraine, the United Kingdom, Sweden and Afghanistan – banded together to push for answers and accountability under the banner of the International Coordination and Response Group.

But last month, the group expressed frustration with Iran, accusing Tehran of showing “no interest in adhering to its international legal obligations”.

The group set a January 5 deadline for the Iranians to “confirm whether they are willing to engage in negotiations with the Coordination Group, after which we will have to assume that further attempts to negotiate reparations with Iran are futile”.

In May, a Canadian court entered a default ruling accusing Iran of intentionally downing the plane in what it called an “act of terrorism”, prompting an angry reaction from Tehran, which called the court’s decision “shameful”.

“Everyone knows that the Canadian court is fundamentally not qualified to judge this aviation accident or potential negligence in an incident that is outside the territory and jurisdiction of Canada,” the Iranian foreign ministry said at that time.

In late 2020, the Iranian government announced it would allocate $150,000 to each of the victims’ families.

Governments are usually protected from civil lawsuits abroad, but a 2012 Canadian law restricted the legal immunity of countries on its “foreign state supporters of terrorism”, including Iran.

Last week’s judgement is likely to deepen tensions between Canada and Iran.

Canada shuttered its embassy in Tehran and expelled Iranian diplomats from Ottawa in 2012, describing Iran as “the most significant threat to global peace and security in the world”. Iran responded by calling the government of then-Prime Minister Stephen Harper “extremist”.

Iran has accused Canada of politicising the response to the downing of flight PS752.

“Canadian officials have had the most unwarranted interventions from day one and have tried to prevent the natural path of this issue being clarified,” an Iranian foreign ministry spokesperson said in December 2020.

‘Why Was I Born a Girl?’ An Afghan Poem Inspires U.S. Students

No issue in backing Akhilesh if need be, says Priyanka