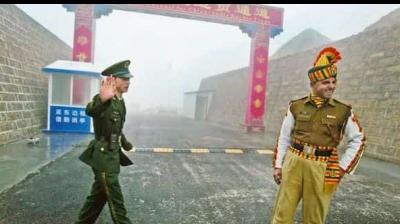 New Delhi: The Chinese Army has not agreed to the constructive suggestions given by the Indian Army to resolve the remaining friction points or areas along the Line of Actual Control (LAC) and that is why the 13th round of talks concluded without any results, the Indian Army said in a statement on Monday.
During the meeting, the Indian side made constructive suggestions for resolving the remaining areas but the Chinese side was not agreeable and also could not provide any forward-looking proposals.

“The meeting thus did not result in resolution of the remaining areas,” the Army said, in its statement on the 13th round of corps commander level talks held in Moldo on the Chinese side of the LAC on Sunday.

The Army said that during the meeting, the discussions between the two sides focussed on the resolution of the remaining issues along the LAC in Eastern Ladakh.

The long-pending issues along the LAC include the Daulat Beg Oldie and Demchok area whereas the Hot Springs area is the last friction point to be resolved from the ones that came up last year post the unilateral Chinese aggression there.

The Indian side pointed out that the situation along the LAC had been caused by unilateral attempts of the Chinese side to alter the status quo and in violation of the bilateral agreements.

“It was, therefore, necessary that the Chinese side take appropriate steps in the remaining areas so as to restore peace and tranquillity along the LAC in the Western Sector,” the statement said.

The Indian Army asserted this would also be in accord with the guidance provided by the two Foreign Ministers in their recent meeting in Dushanbe where they had agreed that the two sides should resolve the remaining issues at the earliest.

“The Indian side emphasised such resolution of the remaining areas would facilitate progress in the bilateral relations,” the statement said.

During the meeting, the Indian side, therefore, made constructive suggestions for resolving the remaining areas but the Chinese side was not agreeable and also could not provide any forward-looking proposals. The meeting thus did not result in the resolution of the remaining areas.

The Army said the two sides have agreed to maintain communications and also to maintain stability on the ground. It is our expectation that the Chinese side will take into account the overall perspective of bilateral relations and will work towards early resolution of the remaining issues while fully abiding by bilateral agreements and protocols.

Meanwhile, the Chinese Army has also issued a statement after a meeting in which it has said that New Delhi’s “unreasonable and unrealistic” demands have added difficulties to the negotiations to resolve the matter.

The Chinese side has said India should not misjudge the situation but instead the Indian side should cherish the “hard-won situation” along the LAC.