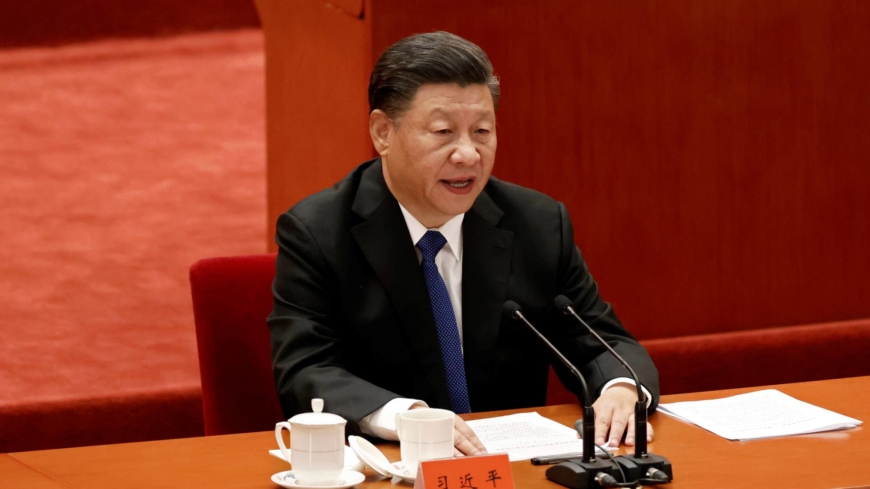 Chinese President Xi Jinping said Saturday that reunification with Taiwan “will be and can be realized,” less than a week after Beijing sent record numbers of warplanes into the air defense identification zone (ADIZ) near the self-ruled island.

Xi’s remarks on Taiwan, which came in a speech marking the 1911 uprising that toppled the last Qing emperor and led to the founding of the Republic of China, largely followed the tack set in his last high-profile comments on the issue in July. At that time, the Chinese leader declared taking control of Taiwan as the Communist Party’s “historic mission” and “unshakable commitment” and vowed to “smash” any attempts at independence.

In Saturday’s speech, Xi said China would “adhere to the basic policies of peaceful reunification and ‘one country, two systems,’ uphold the ‘One China principle’ and the 1992 consensus and work for the peaceful development of cross-strait relations.”

But the Chinese leader also sounded an ominous tone, reiterating that “Taiwan independence is the greatest obstacle to national reunification and the most grave hidden danger to national rejuvenation.”

“The historical task of the complete reunification of the motherland will be and can be realized,” Xi said.

“Those who forget their heritage, betray their motherland and seek to split the country will come to no good end and will be detained by the people and consigned by history,” he added.

Although Xi did not mention the use of force for reunifying Taiwan with the mainland, he did call the issue “purely an internal matter… that brooks no external interference” — a response to growing U.S.-led pressure on Beijing over its moves near the self-ruled island.

In past speeches, Xi has struck a more overtly hostile tone when referring to what China considers a renegade province.

In a January 2019 speech, the Chinese leader said that Beijing would “make no promise to renounce the use of force and reserve the option of taking all necessary means” to prevent independence and reunify Taiwan with the mainland.

In a statement released after Xi’s speech, Taiwan’s Mainland Affairs Council, which sets policy for the island’s dealings with China, urged Beijing to “abandon its provocative steps of intrusion, harassment and destruction” and return to talks.

Although Beijing remains deeply suspicious about Taiwan President Tsai Ing-wen and her ruling Democratic Progressive Party’s intentions, the Taiwanese leader has refrained from pushing the envelope on a formal declaration of independence, claiming that the island is “already independent.”

Xi’s speech comes on the heels of surging tensions in the Taiwan Strait after Chinese warplanes — including advanced fighters and nuclear-capable bombers — conducted nearly 150 sorties into Taiwan’s ADIZ in the first five days of October, setting single-day records on three of those and raising the specter of military miscalculation.

On Friday, Beijing also urged Washington to abide by its agreement to keep troops out of Taiwan, delivering a surprisingly boilerplate response to reported U.S. confirmation that American special forces and Marines have been training local forces to better defend themselves in the event of an attack by China.

“The One-China principle is the political foundation of China-U.S. relations…. In the communique on the establishment of diplomatic relations between China and the U.S., the U.S. clearly pledged to only maintain cultural, commercial and other unofficial ties with Taiwan,” Chinese Foreign Ministry spokesperson Zhao Lijian said.

Washington, which switched diplomatic recognition to Beijing from Taipei in 1979, considers the self-ruled island a key partner and crucial line of defense as the Chinese military continues to push further into the western Pacific. Although it no longer formally recognizes Taiwan, the U.S. is required by law to provide Taipei with the means to defend itself, according to the Taiwan Relations Act.

Xi’s apparently restrained remarks on Taiwan and the toned-down response to the report of U.S. troops there come after the United States and China agreed in principle on a virtual leaders summit before the end of the year, after high-level talks aimed at improving communication between the two rivals.

It was unclear what the speech signaled amid both the promise of more talks with the U.S. and after the surge in saber-rattling near Taiwan.

But Wen-Ti Sung, a lecturer at the Australian National University and expert on Taiwan-China relations, called Xi’s speech on Saturday a “remarkable softening down on Taiwan policy… after a week of intense military posturing.”

“First yield a big stick, and then show the carrot,” he wrote on Twitter.

Paris massacre: 60 years on, France must face its colonial past

‘Why can’t we study?’: Afghan girls still barred from school

Time has come to honour your words: Sibal to Bhagwat on forming RSS force in 3 days amid killings in Jammu and Kashmir

‘India-Israel cooperation during pandemic a shining example of strategic partnership’