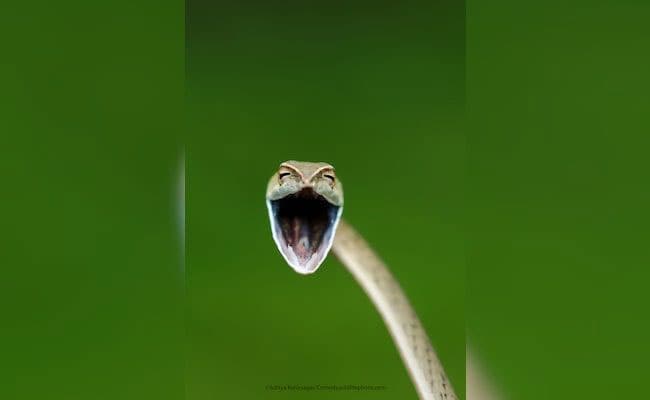 The Comedy Wildlife Photo Awards has published 42 images shortlisted for its 2021 competition. “The final 42 images, plus the Portfolio and Video category entries from around the world include a laughing vine snake from India, a trio of strutting Gentoo penguins on the beaches of the Falkland Islands and a Kangaroo performing a picture-perfect Pavarotti impersonation in Australia,” the competition said in a press release. These photos were chosen from among 7,000-plus entries received from across the world.

Comedy Wildlife Photography Awards was founded in 2015 by professional photographers Paul Joynson-Hicks MBE and Tom Sullam, who wanted to create a competition that focused on the lighter side of wildlife photography and help promote wildlife conservation through humour.

Take a look at some of the funniest entries from Comedy Wildlife Photo Awards 2021 finalists:

“Vine snakes are very commonly seen snakes in the Western Ghats of India. When approached, they show aggression by opening their mouth wide open,” the photographer said, adding that he was happy to see this one look like it was smiling at him.

A pied starling, captured on camera in South Africa. “I took this shot while photographing a group of Pied starlings perched in a tree at the Rietvlei Nature Reserve in South Africa. It perfectly sums up my mood on most Monday mornings,” said Andrew Mayes.

“Two Gentoo penguins having a discussion after coming out of the surf,” is how the photographer described her shot. This picture was taken at the Falkland Islands.

A smooth-coated otter ‘bites’ its baby to bring it back to and fro for swimming lesson.

“During a game drive we found a group of monkeys playing around with each other, jumping up and down from a bare branch.It was a joy to watch. After a while I saw a giraffe coming from the right. By the moment the giraffe did pass the branch, one of the monkeys was on his post to ride the giraffe,” said Dirk-Jan Steehouwer while describing this perfectly-timed photograph.

An Indian chameleon, photographed in the Western Ghats

“A golden silk monkey in Yunnan China – this is actually a show of aggression however in the position that the monkey is in it looks quite painful!” the photographer said.

Describing this pic, the photographer said: “The kangaroo looked like he was singing ‘the hills are alive, with the sound of music’ in the field.”

Did I say you could take my picture? By Patrick Dirlam, USA

“I followed this Ruby-Crowned Kinglet for about 15 minutes as it hopped from one branch to another in fast succession. I think it knew I was following it because, all of a sudden, it just stopped and stared at me for all of about 3 seconds!”

Dancing Away to Glory by Sarosh Lodhi, India

“A young langur sways its body to give an impression that its dancing.”

“I have been following the family of a tigress called Paaro in India’s Jim Corbett National Park for many years. This is her daughter who has stood on her hind limbs to be able to scratch her face with a log. But, it appears as if she is carrying the log on her shoulders,” Mr Agrawal said.

“Although this looks painful, and it might very well be, the eagle recovers with just a few sweeping wing strokes, and choses to rest a bit before making another lumber run.”

The Baboon who feels like a tenor by Clemence Guinard, France

A Hamadryas baboon started to yawn in this photo taken in Saudi Arabia. “But the graceful position of its paws, its fluffy cape, its eyes looking like it put some makeup. In front of the camera, this Baboon was on stage, ready to please its public and to start its tenor’s solo.”

“I Want To Go To School”: Afghan Girl’s Speech Moves The Internet

Freshworks CEO Has All The Right Dance Moves, As A Rajini Fan Should. Proof Inside

Theatres in Kerala to reopen in October?

Why Nagarjuna teared up on meeting Aamir