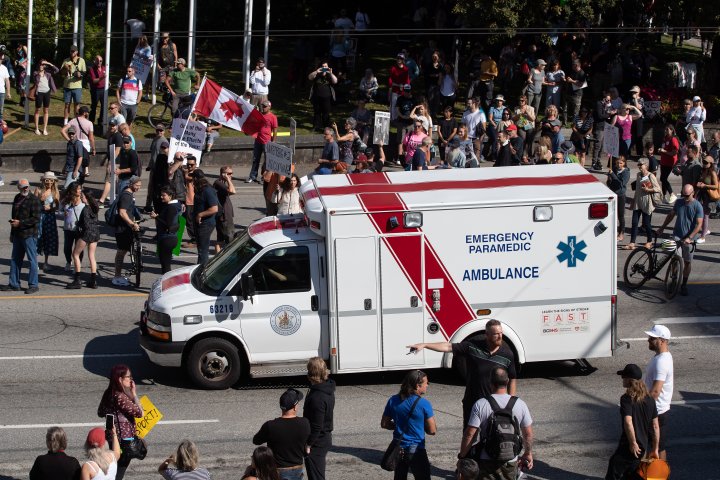 Well, it has finally happened. News this week of widespread and disruptive anti-vaccine protests at Canadian medical centres means that America’s destructive, self-defeating and totally nonsensical anti-vaccine movement has begun crossing the border.

As a pediatrician, vaccine-scientist and parent of an adult daughter with autism and intellectual disabilities, I have had a front-row seat to America’s anti-vaccine movement for the last two decades. I’m also a lead target, and sometimes known as the ‘OG Villain’ for writing the book, Vaccines Did Not Cause Rachel’s Autism a few years back.

When I learned of this, I had to Google it — OG means ‘original gangster.’ My gangster status has since accelerated,when our research group at Texas Children’s Hospital and Baylor College of Medicine developed a global health COVID-19 vaccine now being scaled for production in India and Indonesia.

The brief modern history of the anti-vaccine movement in America goes something like this: It began following the publication of a British clinical study published in The Lancet, which is a prestigious medical journal, in 1998. It claimed that the measles-mumps-rubella (MMR) vaccine, which is a live virus vaccine, has the ability to replicate in the large intestines of children and somehow this led to what was then called pervasive developmental disorder, a term formerly used for autism.

Ultimately, the results were shown to be invalid, and the paper was retracted by the journal editors. However, the retraction did not officially occur until 2010, and so during the 2000s, many parents began withholding vaccines from their children. Even after the biomedical community debunked MMR vaccine-autism links, anti-vaccine groups ramped up their assertions. They claimed it was the thimerosal preservative formerly contained in many vaccines, or spacing vaccines too close together and even alum adjuvants. Each time we debunked their claims.

As the anti-vaccine movement began to lose steam, they re-energized by acquiring a political dimension. Starting around 2014, they linked to the Republican Tea Party rallying around libertarian slogans, including ‘health freedom’, which became especially strong in Texas. Large numbers of parents opted their kids out of vaccinations in the 18 states that permitted non-medical exemptions for personal belief reasons.

This 2.0 version of the anti-vaccine movement remains with us today. Starting in 2020, health freedom expanded to mask and social distancing protests as far-right elected members of the US Congress and several red-state governors openly questioned either the safety of vaccines, or any types of COVID-19 vaccine requirements.

Not being vaccinated against COVID-19 became a new badge of allegiance to conservatism. The result? Devastating consequences. Roughly 100,000 unvaccinated Americans have lost their lives to COVID since this spring.

Today, the anti-vaccine movement has three major drivers. One of them is anti-science aggression from the far-right, as highlighted above. However, there are also at least a dozen non-governmental groups identified by the Centre for Countering Digital Hate as responsible for approximately two-thirds of the anti-vaccine disinformation in America.

The third is Russian propaganda, which promotes anti-vaccine disinformation as a means to destabilize the U.S. and other democratic countries, possibly including Canada.

I don’t have a good sense of what’s driving anti-vaccine sentiments in Canada, and whether they are similarly linked to health freedom or far-right leanings. But it worries me, especially given what has happened in the U.S. where anti-vaccine expressions are often accompanied by vile Nazi imagery, and authoritarian attitudes. This type of anti-science aggression even extends to targeting prominent U.S. scientists and seeks to delegitimize our expertise.

Read more: Warnings issued ahead of expected protests at hospitals across Canada

I hope things do not degenerate further in Canada. I love the Canadian people. My grandfather, Morris (aka Maurice, aka Moishe) Goldberg, grew up in the Jewish Quarter of Paris, but later immigrated to Montreal in the 1920s, well ahead of the Nazi occupation in France. I often say, the only reason I exist is because of the goodness of the Canadian people who accepted my grandfather. In return, I’m a life-long Habs fan, and there aren’t too many of those here in Texas.

But I wish you the best in dealing with what is to come. Watch out for it. In the U.S., anti-vaccine groups can become extremely aggressive and hostile, and increasingly they are imbued with far-right extremist ideologies and zeal. They also love their Nazi imagery.

Good luck. You didn’t deserve this.

Peter Hotez MD PhD is a Professor of Pediatrics and Molecular Virology at Baylor College of Medicine where he is also the Texas Children’s Hospital Chair in Tropical Pediatrics.  His latest book is Preventing the Next Pandemic: Vaccine Diplomacy in a Time of Anti-science (Johns Hopkins University Press)

What We Learned from the Canadian Election