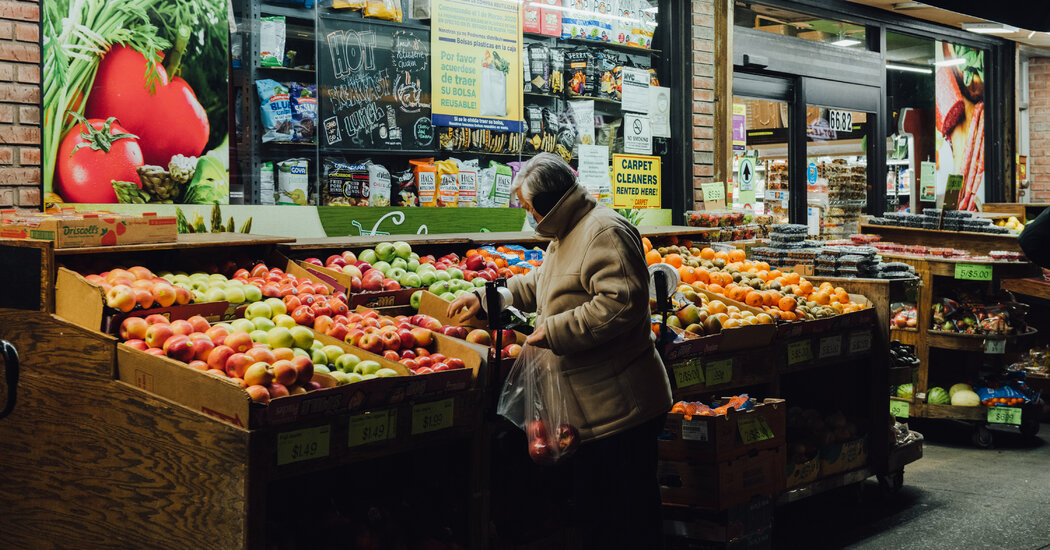 Inflation closed out 2021 on a high note, troubling news for the Biden White House and for economic policymakers as rapid price gains erode consumer confidence and cast a shadow of uncertainty over the economy’s future.

The Consumer Price Index climbed 7 percent in the year through December, and 5.5 percent after stripping out volatile prices such as food and fuel. The last time the main inflation index eclipsed 7 percent was 1982.

Policymakers have spent months waiting for inflation to fade, hoping supply chain problems might ease, allowing companies to catch up with booming consumer demand. Instead, continued waves of virus have locked down factories, and shipping routes have struggled to work through extended backlogs as consumers continue to buy goods from overseas at a rapid clip. What will happen next might be the biggest economic policy question of 2022.

“Obviously 7 percent is a pretty big sticker shock,” said Omair Sharif, founder of the research firm Inflation Insights. He thinks inflation could plateau around 7 percent, but will take time to ease back from that peak — and is likely to end 2022 above the near-2 percent level that policymakers prefer.

“It’s just a lot of wood to chop to get down to anything approaching the good old days,” Mr. Sharif said.

The fresh data released on Wednesday showed that the cost of used cars and food is increasing quickly, and provided further evidence that costs are broadening beyond just a few pandemic-disrupted categories. Rents continue to pick up at a solid pace, and meals at full-service and limited-service restaurants are more expensive, possibly a sign that recent wage increases are beginning to feed into higher prices as employers look to cover higher labor costs.

“This report underscores that we still have more work to do, with price increases still too high and squeezing family budgets,” President Biden said in a statement following the report.

As prices gains become more widespread — a worrying sign that they might linger even as pandemic disruptions fade — economic policymakers are poised to react. Federal Reserve officials have indicated that they expect to raise interest rates several times this year as they try to slow down demand and the economy in a bid to make sure that the pandemic-era burst in prices does not become a permanent feature of the economic landscape.

Jerome H. Powell, the Fed chair, emphasized on Tuesday that the central bank was shifting into inflation-fighting mode after months of trying to prop up the pandemic-stricken economy. Officials expect price gains to moderate this year, but are keeping a watchful eye on how quickly that happens.

“If we see inflation persisting at high levels longer than expected, if we have to raise interest rates more over time, we will,” Mr. Powell told lawmakers during a Senate Banking Committee hearing on Tuesday.

Given the recent data and Fed comments, investors and economists increasingly expect four interest rate increases this year. But the trajectory for inflation — and thus for policy — is uncertain.

Prices for used cars and trucks have been a big driver of recent price gains. Auto manufacturers have been struggling to get their hands on parts — particularly computer chips imported from Asia — delaying production of new vehicles and pushing up demand for a finite supply of used ones.

When it comes to vehicle prices, “it’s not over yet,” Jim O’Sullivan, chief U.S. macro strategist at T.D. Securities, said before the report.

Recent lockdowns in China meant to contain the coronavirus, inspired by the country’s continued embrace of a zero-tolerance policy when it comes to the pandemic, could exacerbate the chip shortage, among other supply chain issues.

“If they stick to their zero-case doctrine, a global supply chain disaster is on the horizon,” said Tinglong Dai, a professor of operations management at Johns Hopkins University Carey Business School.

Economists and Wall Street analysts tend to closely focus on a measure of prices that strips out food and fuel costs, because they jump around a lot from month to month, but those expenses matter a lot to households.

The fact that high prices are taking a bite out of household budgets seems to be one of the reasons that consumer confidence has faltered; gas and food tend to be among the most salient costs for shoppers.

Jon Willow, 55, of Interlochen, Mich., has seen grocery costs climb steeply since the pandemic started — so much that she and her partner have tried to move away from purchased produce by canning vegetables from their garden and heating their henhouse through the winter so that their chickens keep producing eggs.

“We have a no-food-left-behind policy at the house now — we use everything,” she said, noting that they had preserved tomatoes, squash and asparagus.

The pair are worried about whether their retirement savings will last as long as they had expected and planned for, given the quicker price increases. Both are still working: Ms. Willow has a communications practice that works with local governments and utilities and is co-founder of a nonprofit organization focused on expanding rural broadband. Her partner is a full-time design engineer at a local business that makes custom signs for large companies. They had planned for the future assuming a lower inflation rate.

A critical question for families like Ms. Willow’s is how long today’s heady inflation persists. Policymakers and economists had initially hoped that they would alleviate quickly, and still expect them to moderate throughout 2022. Like Mr. Sharif, Mr. O’Sullivan at T.D. Securities said he thought price gains could hover around 7 percent for a few months before beginning to decline, which would make this roughly peak inflation.

Economists are, however, paying attention to a few factors that could keep prices rising too quickly for comfort.

Inflation pressures were centered squarely on goods early in the pandemic, but they have recently been creeping into services — and important, into rents. Housing costs based on rents make up about a third of the Consumer Price Index, so the fact that landlords are charging more matters a lot for overall inflation.

Officials are also uncertain about when the supply chain crisis that has pushed up the cost of cars, couches and imported goods of all kinds will abate. There are early signs that shipping route snarls and depleted inventories may be moderating, but other signals suggest a return to normal will take time.

“You always see a few snowflakes, but it doesn’t amount to a storm yet,” Mr. Powell, the Fed chair, said during Senate testimony on Tuesday, referring to signs that kinks in the supply chain were resolving themselves.

Caroline McCroskey, 27 and from Tulsa, Okla., manages marketing for a furniture manufacturer that imports pieces from China and Cambodia and sells them to major retailers. The company has seen sharp cost increases as shipping container prices have rocketed higher.

“The freight is bad enough, but we’ve seen a dramatic increase in leather hides and fabrics,” she said. “Nobody is feeling super optimistic about shipping rates returning to normal anytime soon.”

High inflation is a political liability for the White House as Democrats head into a midterm election year when they will battle to retain control of Congress. Republicans have increasingly accused President Biden of driving prices higher by flooding the economy with too much money, including a third round of stimulus checks.

The administration is doing what it can to alleviate the supply chain problems, from pushing for longer port opening hours to releasing strategic petroleum reserves to help bring fuel prices down. But most economists say that those moves only help around the edges.

“Inflation has become a dominant political issue, but one that is largely out of the administration’s control,” Alec Phillips, an economist at Goldman Sachs, wrote in a recent research report.

5G rollout: Air India resumes B777 operations to US