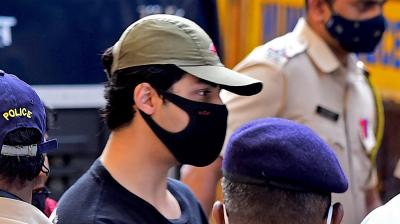 Different drugs like MDMA, ecstasy, cocaine, MD (mephedrone) and charas were recovered from them during the raid conducted on Saturday

Mumbai: The Narcotics Control Bureau (NCB) on Sunday arrested Aryan Khan, son of Bollywood superstar Shah Rukh Khan, in connection with the seizure of banned drugs onboard a cruise ship off the Mumbai coast.

Aryan Khan would be produced before a metropolitan magistrate’s court here shortly.

Advocate Satish Maneshinde would be representing Aryan Khan in court.

Aryan Khan has been booked under various sections of the Narcotics Drugs and Psychotropic Substances Act (NDPS) for possession and consumption of banned substances.

He and seven others were detained late Saturday night by NCB sleuths after they raided the cruise ship on its way from Mumbai to Goa.

Based on a tip-off that a party was scheduled on the ship, an NCB team, led by its zonal director Sameer Wankhede, had raided the Goa-bound Cordelia cruise ship on Saturday evening and recovered drugs from some of the passengers, the official said.

“During the operation, the suspects were searched and different drugs were recovered from them, which they had hidden in their clothes, undergarments and purses (by women).

The detained persons will be produced in a court later in the day after the legal formalities get over, the NCB official said.

Early this morning, the NCB questioned the detainees at its office here, he said.