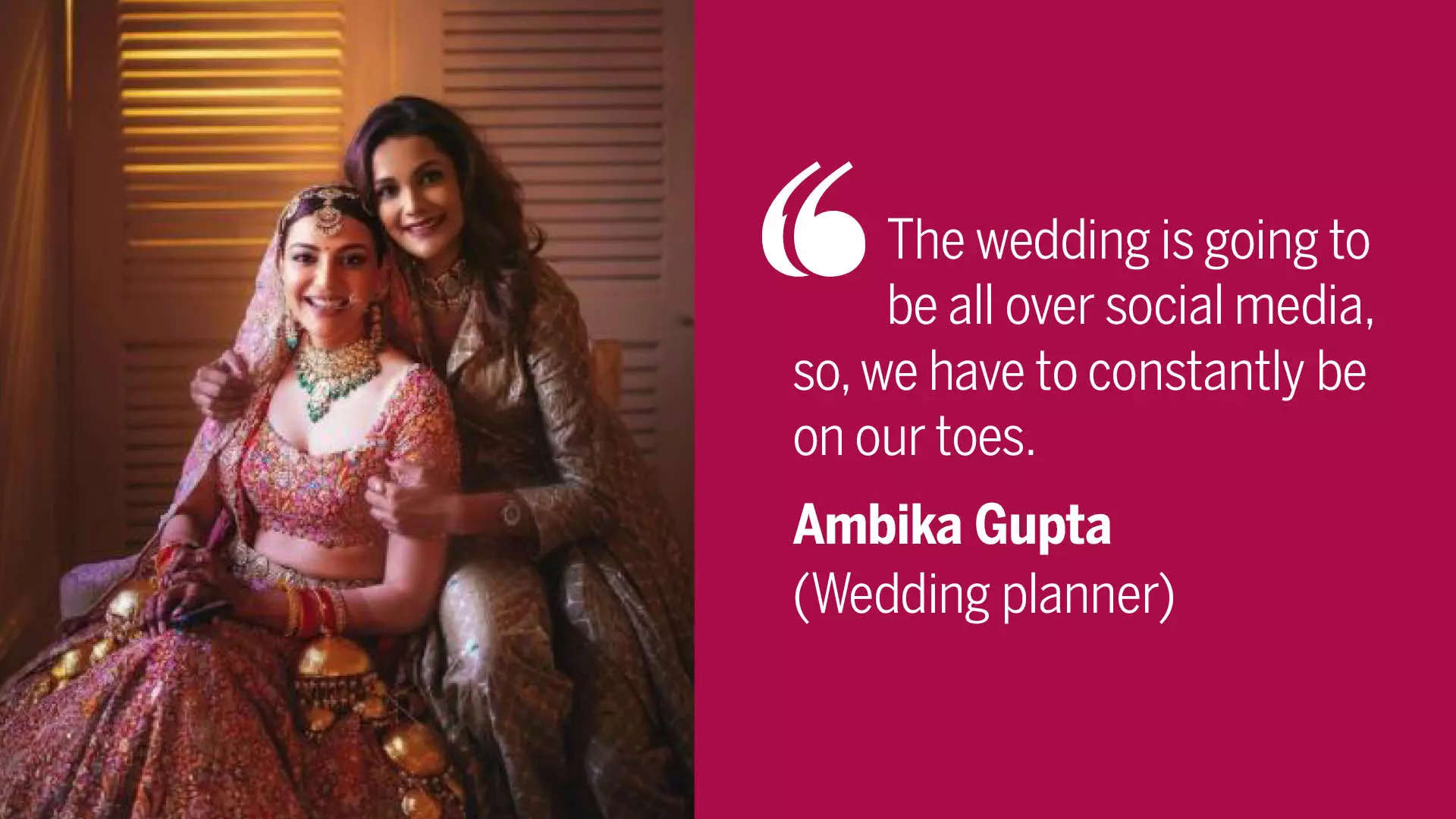 Remember the time when paparazzi climbed up the trees just so they could steal a glimpse of Aishwarya Rai’s wedding to Abhishek Bachchan? Who can forget Anushka Sharma and Virat Kohli’s Tuscan countryside ceremony that was all the rage on social media even days after the couple put up pics with each other? And more recently, the whole country ooh-ed and aah-ed over just how much in love Rajkummar Rao and Patralekhaa seemed to be in from their wedding pics. Big, fat Indian weddings are spectacles even on their own but when you throw in a celebrity couple in the mix, things certainly get scaled up further. The curiosity around a high-profile couple and the extensive media coverage they command results in an event that is truly over-the-top, only except when it’s not. But what goes into a celeb wedding and just why do we so love watching celebs get married? ETimes’ #BigStory tries to decode the hype…
Social media guest list

Besides being a great networking tool, social media also connects people like never before. While earlier celeb couples could only share a few pics with a magazine and give out an interview talking about their love for each other, now they have a platform all to themselves to connect with their fans and share with them candid pictures from the ceremony while also talking about the importance of every ritual to them. In a way, all of the actor couple’s followers make it to the guest list of the wedding. And while they don’t get to enjoy the food there, they can certainly feast on the details that these celebs are more than happy to share. When Sonam Kapoor decided to get married in Mumbai instead of opting for a destination wedding away from the prying eyes of the media, she still ensured that the ceremony was kept private, but didn’t stop her wedding guests from posting pictures and videos of their shenanigans on social media. Glimpses of the reception party, especially, offered fans a chance to see what the shaadi looked like.

However, more often than not, celebs prefer their weddings to stay as private as possible. Considering that they live their lives in the public eye, this only seems like a fair demand. And so, wedding planners go out of their way to ensure their clients get what they ask for. Indian skipper Virat and actress Anushka got their wishes answered when their planners planned the whole wedding with pseudo names such that none of the bookings were non-traceable. It was only when the bride and groom’s families were spotted at the airport together that the media put two and two together but it wasn’t until the couple put out pictures from their dreamy wedding on social media, did anyone find out anything else about the wedding. Before them, Rani Mukerji and Aditya Chopra had also tied the knot in a similar manner in Italy, and it was such an intimate affair that to date, there are no other leaked pictures from the event.
Later, celebs like Neha Dhupia-Angad Bedi, Yami Gautam-Aditya Dhar, and Dia Mirza-Vaibhav Rekhi also got married in similar, private ceremonies. Talking about the brief they are given for celebrity weddings, Ambika Gupta, who was the wedding planner and designer behind Kajal Aggarwal’s beautiful post-pandemic ceremony, says, “Maintaining privacy and non-disclosure is the main part of planning a celebrity wedding. A lot of people want to crash the wedding, the paparazzi are also always trying to sneak in a pic, so, we have to be extra careful”. But even without the flashbulbs going off, there’s always that one leaked picture that can disrupt everything. “Yes, it is going to be all over social media, so, we have to constantly be on our toes,” she further points out.


Privacy aside, celeb weddings are also shrouded in secrecy. There were reports of how the mobile phones of Deepika Padukone and Ranveer Singh’s guests were taken away to ensure that unapproved pics from their Lake Como wedding didn’t make it to social media. Later, after the bride and groom had been married according to Konkani and Sindhi traditions, did they post carefully curated high-definition photos of themselves, from the picture-perfect wedding, offering the world the first glimpse of them as a married couple. Mehendi artist Veena Nagda, a favourite at Bollywood weddings, recalls how she herself didn’t know that she would be present for Deepika-Ranveer’s wedding. 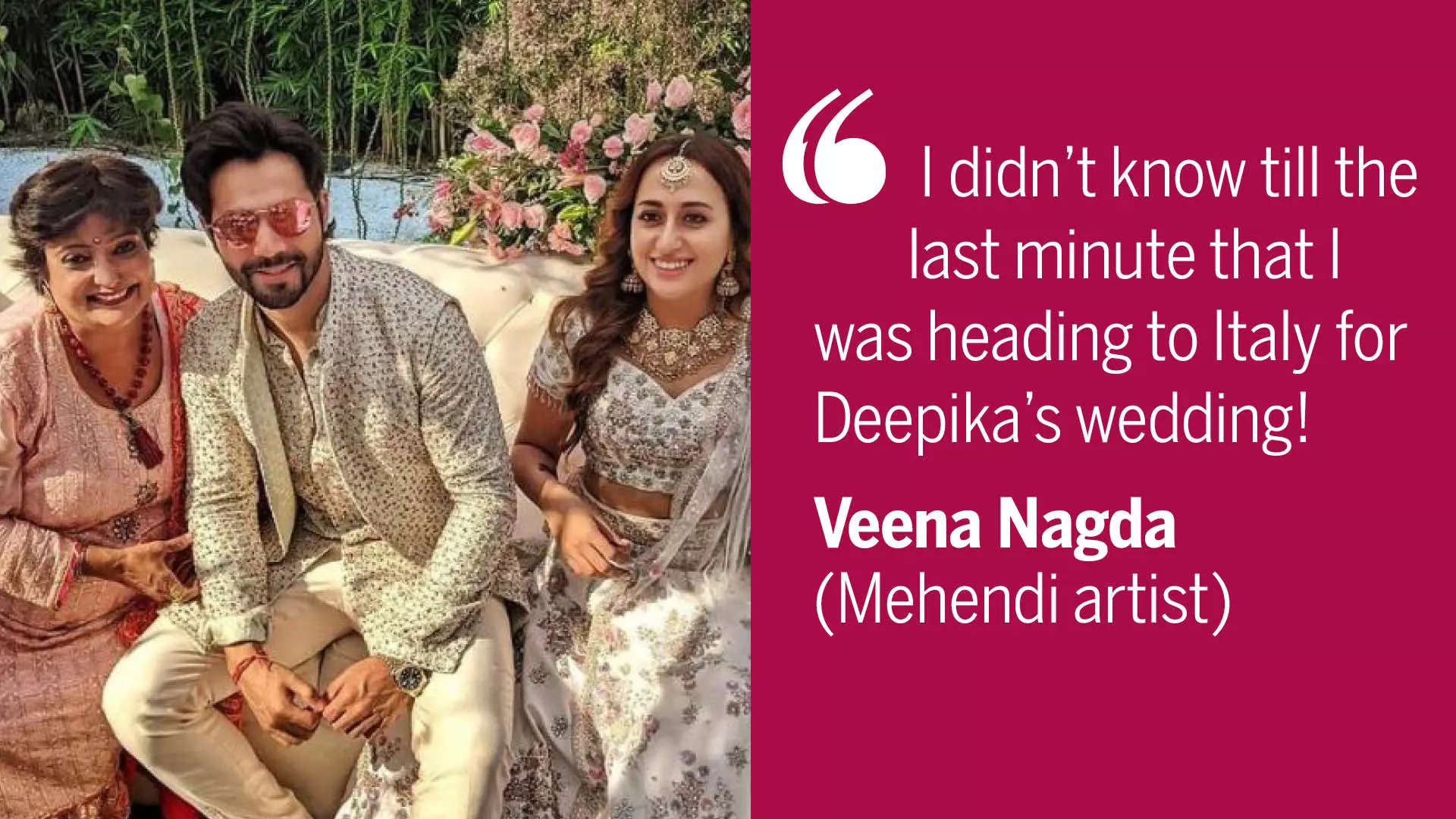 “Secrecy is of utmost importance to celebrities. And now with social media, they are all the more guarded about their wedding details. In fact, there are times when we don’t even know that the booking is for a Bollywood celebrity. Like for Ranveer and Deepika’s wedding, the wedding planner booked our dates for November 11-15, without informing us about the client. I didn’t know till the last minute that I was heading to Italy for Deepika’s wedding! After the mehendi ceremony, we were given off for the rest of the days to travel around. And this was the case even years ago. Dimple (Kapadia) ji had booked me for Twinkle Khanna and Akshay Kumar’s wedding but I was told not to reveal it,” she shares.
Namita Alexander, who styled Patralekhaa for her wedding to Rajkummar Rao in Chandigarh, laughs when asked about how she manages to keep things under wraps when it comes to her celebrity clients, adding, “Normally with a celebrity wedding, the first thing that you get is a Non-Disclosure Agreement. Everyone working for the wedding has to sign a non-disclosure. So even before initiating the conversation with the designer, we need to make sure the papers are signed and lips are sealed. I can’t tell even my family or friends about the projects until the wedding pictures are out”.


But no matter how posed the candids that make their way to us are, we can’t help but fawn over the loved-up pics from the ceremony we attended by scrolling through our Instagram feeds. If you notice, celeb weddings do follow a pattern in that, days after the wedding, little details from the ceremonies are revealed. A guest here or someone from the crew there, helps fans piece together what the ceremony must have been like. In the case of Varun Dhawan and Natasha Dala’s Alibaug wedding earlier this year, the photographers stationed outside the venue gave away all the details about the groom’s filmy entry. Veena, who also did the mehendi for Natasha, reveals, “Varun had got an ‘OM’ and ‘N heart V’ mehendi done. Ranveer got a ‘Diya’ and stars imprinted on his hand, as a representation of ‘Deepika’. Usually, celebrities have their designs in mind and share the same with us. Like Shilpa Shetty wanted to start her mehendi with Lakshmi ji and Ganpati ji, but since we do not draw God on the hand, she settled for a lotus, which is representative of Lakshmi ji. Kajal Aggarwal’s husband Gautam also suggested that her mehendi should have a lotus. Recently hashtags have also become very popular. Also, at times we have to incorporate the bridal outfit’s design into the mehendi patterns”.


Given that the devil is in the details, a lot of time is spent on deciding an ideal destination for the wedding. While most celebs get married in the city as it is more feasible, a lot of the others choose foreign shores to tie the knot so that not only can their guests experience a holiday, but they can better manage the media too. While Italy, with its pastoral landscapes, vineyards, and castles has lured away many Bollywood couples, other popular wedding destinations are Goa and Rajasthan. Not only are these destinations closer home, but they also afford the celebrity couple a dreamy setting, not unlike the ones they are used to shoot for their films at. Katrina Kaif and Vicky Kaushal’s upcoming wedding ceremony is going to take place at a 14th-century fort in Ranthambore which has now been converted into a resort. Ali Fazal and Richa Chadha were also planning a wedding spread over three cities–Lucknow, Delhi, and Mumbai–so that all of their relatives, who lived in the respective cities could attend the functions. However, the pandemic threw a spanner in the wheels and the couple is yet to set a date.

However, once the location is locked, the first ones to be informed are the ones planning the trousseau. As Namita reveals, “Once the NDA is signed, the client sends us details such as the location because the weather makes a huge difference in an outfit. We need to be prepared for all possibilities. Then comes the number of functions, themes, and dress code-this is a very basic brief. This is followed by blocking the dates and then we get to know how big or small the wedding is, how the bride wants to get dressed. Usually, some functions are more intimate than others”. But what’s the budget for such weddings like? Are budgets just as blinding as the glitzy outfits and beautiful decor? “When it comes to the wedding day no one holds back. Whether they want to be traditional or extra comfortable or have a certain colour palette–we hit the brief. For example, for Patralekhaa’s wedding, she wanted to go for traditional red. Though it’s a job for me, it’s also very personal as it’s someone’s wedding. When you attend the wedding you become a part of the wedding. It’s just not the styling but a very personal experience through the style statement. You have to know their story, journey and incorporate that in the story, it gets emotional,” asserts stylist Namita.

Imitation is the best form of flattery


Let’s face it, we are all living vicariously through these celebs who get married in such lavish ceremonies. And often soon-to-be-married couples look at these celeb weddings as a lookbook to plan theirs. But not only do the beautifully-planned events call for exorbitant budgets, they often take away from the couple themselves, and considering this is the most important day of people’s lives, no one would want that. Veena reveals that she often gets requests from brides for a mehendi similar to the one she did for a celeb. And Ambika returns to say, “We get requests to do a wedding like a particular celebs’ wedding was done and while we try to incorporate some elements from the celebrity wedding, we also try to customise it according to the couple getting married as it’s their big day and they are the celebrities for us”.

Big B gets teary-eyed watching his 21 year KBC journey

WNBL set to light up with World Cup on the horizon