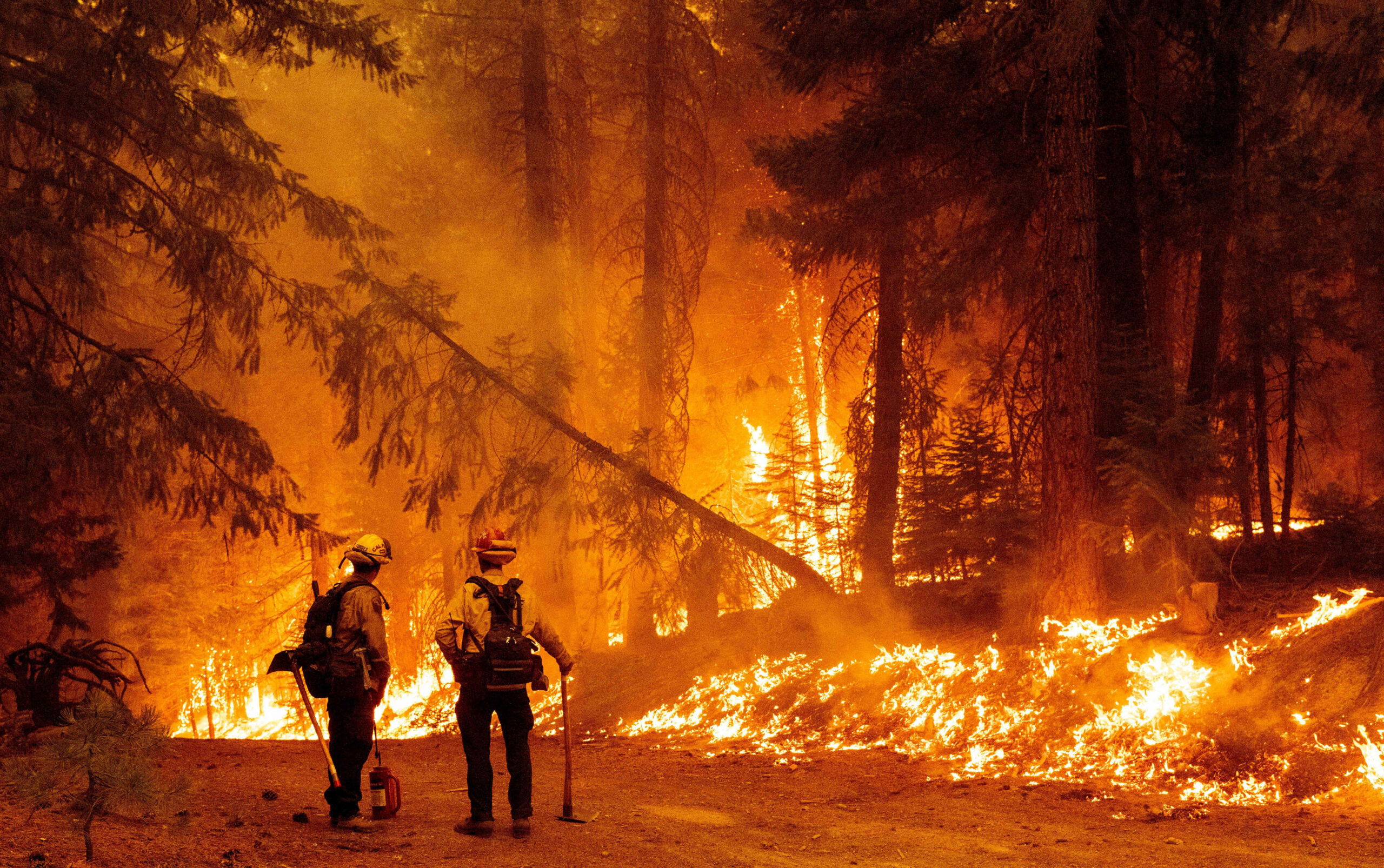 Economies don’t grow, they explode, leaving behind deforestation, carbon emissions, exploited labourers and a burning planet. Climate crises happen because the destruction of the environment is necessary for capitalist economic growth. One cannot happen without the other.

This year has been full of environmental calamities. July was the Earth’s warmest month in recorded history. South Africa had its worst droughts in 100 years. Canada and the United States experienced catastrophic wildfires. In Europe, China, and India, extreme rainfall created deadly floods. These events are in keeping with predictions of increasingly extreme weather events caused by climate change.

As a culprit, most narratives highlight greenhouse gas emissions (GHGs), deforestation and industrial cattle farming. If these practices remain, the Earth will warm 1.5°C above the pre-industrial level this century and unleash irreversible tipping points that wreak havoc on the planet.

The solution is to reach net zero carbon emissions by 2050 by replacing fossil fuels with clean green energy (solar and wind for example), preserving and replanting forests with indigenous trees and shifting to sustainable agriculture. We just need to summon the will to get there.

But what if it’s not this easy?

A growing body of scientific evidence suggests that even with these reforms, we will still destroy the planet. If we have to reduce and cap material resource extraction globally, then we need a very different economic system: one which is egalitarian because resources are finite.

First, growth requires more energy use, forcing us to use more fossil fuels before we fully replace them with green alternatives. As environmental economist Jason Hickel puts it, this is “like trying to run down an up escalator”.

Hickel and others reviewed existing climate mitigation scenarios in a recent article at Nature Energy, noting that they assume all countries, no matter how rich, should continue to grow, even though it requires burning more fossil fuels. In these scenarios, the only way to stay within the 1.5°C limit is to drastically scale up speculative technologies, such as bioenergy with carbon capture and storage (BECCS) and direct air capture.

Plans for “green growth” therefore depend on an unproven strategy with many flaws. For example, the BECCS are taxing on resources, from water and land use to soil depletion and biodiversity loss.

Second, growth not only contributes to more energy use, it puts enormous stress on ecological systems. According to the World Wildlife Federation, two thirds of wild vertebrate life has vanished in just 46 years. Growth is the central culprit. “Until 1970, humanity’s ecological gootprint was smaller than the Earth’s rate of regeneration. To feed and fuel our 21st century, we are overusing the Earth’s biocapacity by at least 56%,” the 2020 report reads.

At a 3% growth rate, economic output would double every 22 years. By 2043, there would be 200 billion tons of extraction. Because growth is exponential, it is impossible to keep growing forever. The debate, therefore, is about when growth must stop, not if.

In 2019, the United Nations endorsed a limit to growth position with Sustainable Development Goal 12, noting that resource consumption is beset by inequality. High-income countries consume about 26 tons a person each year, and low-income countries just two. The sustainable limit is six to eight.

If the whole world consumed at the level of high-income countries, we would destroy the planet many times over. On the reverse, if richer nations reduced their consumption, the globe would meet the sustainable limit.

Critically, the UN noted, people in high-income countries consume about 10 tons of material resources extracted in poorer parts of the world. This reflects what economists call an ecologically unequal exchange whereby biophysical resources are transferred from poorer to richer countries.

Mainstream green technologies such as electric cars and wind turbines still rely on extractivist resource transfers from poorer nations. This means that even green growth is similarly achieved through unequal exchange.

Further, richer nations offset their carbon emissions by purchasing carbon credits from poorer nations. The global north achieves carbon neutrality, not by reducing emissions, but by buying the capacity to emit more.

Focusing on economic growth creates inequality in other ways too. When a corporation increases its profits, the bulk of those earnings are given to shareholders and executives, increasing the wealth gap.

Wages of workers in these corporations decrease in real terms (increase at a rate lower than inflation) which further the wage gap even more. When governments subsidise large successful corporations because those corporations increase the country’s GDP, they are also subsidising wealth inequality.

What about service economies?

Some argue that a shift to a more efficient and service-oriented economy will rely on less material resources, so growth can continue unabated. But this has never been historically observed; just as Earth’s temperature rises with greenhouse gas emissions, use of material resources rises with GDP. This, in turn, causes damage to human health and biodiversity.

Researchers recently found that shifting economic activity to services has limited potential to reduce global environmental impacts due to the household consumption by service workers.

When employees at, say, a big tech firm bring in a median salary of $250 000, they use their salary to buy material goods produced by labourers around the world, who often get little in return. They are consuming beyond their fair share — and that isn’t to speak of the millionaire and billionaire executives and shareholders.

The picture that emerges should make us all very worried. More than half the world’s population lives on less than the $7.40 a day poverty line. If our planet is already overexploiting the Earth, and we need to cap aggregate global resource use, without drastic change people will be locked into severe poverty. We’re left with a wicked inequality crisis that can only be solved by redistributing resources and getting rid of the rich and poor.

Degrowth is not only about stopping climate change and ecological destruction, it’s about fairness in a world that is brutally unjust. Sweatshop workers assembling iPhones in China work long shifts for $70 a week. In Bangladesh, someone making a T-shirt receives $32 a month while the global north then consumes these products — an arrangement that is unfair and directly connected to the legacy of colonialism.

For these reasons, researchers and initiatives such as the Climate Justice Charter in South Africa are pressing for ecosocialism, which is an approach that dares us to change the way in which we live and organise resources.

Ecosocialism is about building solidarity with people to establish food and water commons, carbon-free public transport and community-owned renewable energies. It respects the environment and biodiversity, striving to create ecological synthesis with the world around us.

Instead of trying to boom economies to give riches to an elite class, ecosocialism puts a halt to labour exploitation, resource extractivism and unequal exchanges. At the same time, it pushes for degrowth of the wealthy to achieve fairness and equality for the poor.

If we have to cap growth, resource distribution becomes a zero-sum game — if you have more, someone else has less. The economy needs to shrink for those who have too much, and grow for those who have too little. Fixing the environment is really about ending human inequality and living in harmony with each other and the living planet.

If this seems daunting, there is a plus side. Studies show that we can deliver a quality standard of living for all humans — including health, educational, and social services — within sustainable limits. Moreover, global equality dovetails with racial and other forms of social justice.

It will be difficult to convince the well-off to reorient the economy, reduce their consumption, and get rid of millionaires and billionaires. But we are already exceeding planetary boundaries, and it’s the only fair way forward. There are eight billion people on Earth, millions of species, and a finite planet we are rapidly destroying.

Changing the status quo globally will not happen overnight, and the time left for setting us on the right path is running out. The limits of growth is an issue we need to take seriously, before it is too late.