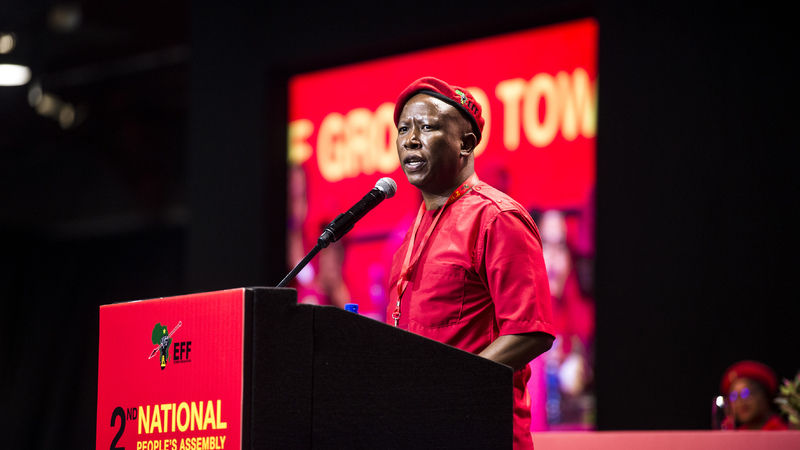 The Economic Freedom Fighters (EFF) has produced yet another ambitious document as its manifesto for this year’s local government elections, promising to root out corruption, redistribute land, and tax the wealthy to provide for the poor.

The EFF held an elaborate manifesto launch on Sunday at its new headquarters named after late struggle stalwart, Winnie Madikizela-Mandela.

The campaign launch was a hive of activity as the party lived up to its promise to bus supporters from all corners of Gauteng to attend.

At least 2 000 supporters decked out in party regalia attended the launch, with many flouting lockdown regulations set by President Cyril Ramaphosa’s government.

Julius Malema was flanked by his deputy, Floyd Shivambu, and the other members of the top six leadership when he arrived to applause and ululation by supporters.

The EFF leader — dubbed commander-in-chief by members of his party — began by praising Madikizela-Mandela for her influence on the liberation of South Africans and his personal political career.

“We, the social economic movement, can assure you that we have picked up the spear and continue the war for economic freedom. We are here to celebrate your massive legacy, because those who claim to be part of you have never celebrated you,” he said, taking aim at the governing ANC.

Malema characterised the EFF’s manifesto as a “roaring lion”, which would fuel the party with determination to win this year’s local government elections.

“We will do so with single-minded determination to ensure total victory for a socialist alternative that has long committed itself to the task of uplifting the lives of ordinary Africans,” he said.

The EFF, which had wanted to have the elections postponed because of the Covid-19 pandemic, said the party’s central command team — comprising the party’s top leaders — had consulted various stakeholders in communities and wards across the country to understand the challenges they face.

“All EFF members and members of the community have played a central role in guiding the manifesto. This is an organic manifesto: not a book of promises, but a contract of commitment to the people of South Africa,” Malema said.

The manifesto, he added, was based on the party’s seven cardinal pillars, namely:

The party has said that, should it receive the mandate to govern at a local level, it would go beyond municipal functions, to help all people in need.

“We will not stand by and do nothing about school toilets because it’s a function of the national government,” he said.

Malema pledged that the party would bring hope to ordinary South Africans and energise the programme of revitalising councils as a critical component of government.

“We have fired corrupt mayors, municipal managers, directors; everyone who was involved in wrongdoing. When we take over, we are going to fire more and place municipalities in the hands of capable and qualified officials,” he said.

The majority of the EFF’s manifesto centres around the land question. In it, the party pledges to carry out land audits to determine true land ownership, and expropriate abandoned and unused land for redistribution to landless people.

Malema said the party will develop an individual land-reform plan, outlining municipal-based land reform targets, in every municipality it governs.

that houses can be built there in the short to medium term.

He said municipalities would establish municipal-owned abattoirs to support and source produce from mainly black-owned livestock farming enterprises and ensure that these enterprises are provided with extension support services.

Malema’s noble plans to reprioritise poor people at local government level come as many municipalities have been labelled dysfunctional by the auditor general Tsakani Maluleke in her annual audit outcomes.

The auditor general said that municipalities had an expenditure budget of R719-billion in the 2019-20 financial year, and that most of the 257 municipalities assessed had either regressed, squandered money or not been able to account for how billions had been spent.

Should Malema take over some of these ailing municipalities, the red berets would be faced with financial challenges in how they implement their manifesto promises.

Among some of the party’s more lofty plans include social grants at municipal level for indigent people, as well as free basic services, such as water and electricity, for the poor.

“Every EFF municipality will communicate or make it known that people who receive social grants will automatically qualify for free basic services without any registration process. Every EFF municipality will build capacity that will include social workers to conduct home visits, document, and profile all indigent households to ensure they receive all free basic services and social grants by June 2022.”

Speaking on Sunday, Malema again reiterated that property tax should be used to subsidise indigent families.

Malema also promised to repair and build new water treatment plants, employing artisans to repair all leaks in water infrastructure, with the aim of reducing the amount of water lost by leaks to 10% of the current rate.

During former president Jacob Zuma’s term it was estimated that water leaks cost the economy about R7-billion. This cost was compounded by water scarcity in some provinces, including the Eastern Cape and the Western Cape, which have experienced drought in recent years.

“EFF will build a water reticulation plant in Hammanskraal within six months. Companies appointed will be expected to include night shift in [their] work schedule. A similar model will be used in other areas where there is an urgent need to supply clean and drinkable water,” he added.

The Democratic Alliance- and ANC-led municipalities have been heavily criticised for failing to resolve the growing water issues faced by the people of Hammanskraal in Tshwane.

The EFF leader also promised to take the party’s fight for free electricity for the poor to the Constitutional Court, should Eskom refuse to provide it in its municipalities.

To ensure transparency at local government level, Malema said the EFF would increase municipal internal audit capacity to enhance efficiency and efficacy in governance, and to pre-empt all forms of corruption.

“All EFF municipalities will have quarterly public meetings to report to residents on the implementation of service delivery and budget implication plans as part of community oversight. Every EFF municipality will ensure that the chairperson of the municipal public accounts committee is elected from the opposition benches to safeguard transparency and oversight over the executive.

According to Malema, each EFF-led municipality will establish a toll-free, independent whistleblowing hotline for employees, members of the public and external stakeholders to report fraud and corruption anonymously.

Babita Deokaran became the latest whistleblower to be killed after speaking out against corruption in the Gauteng health department.

Deokaran was fatally shot outside her home in Johannesburg on 23 August. She was a witness in an investigation into alleged fraud relating to a R300-million tender for personal protective equipment.

Democrats Hammer Out Plan to Tax Billionaires and Corporate Giants

Manchin Is in the Middle, With Biden’s Agenda in the Balance

Vicky Kaushal on the success of Sardar Udham