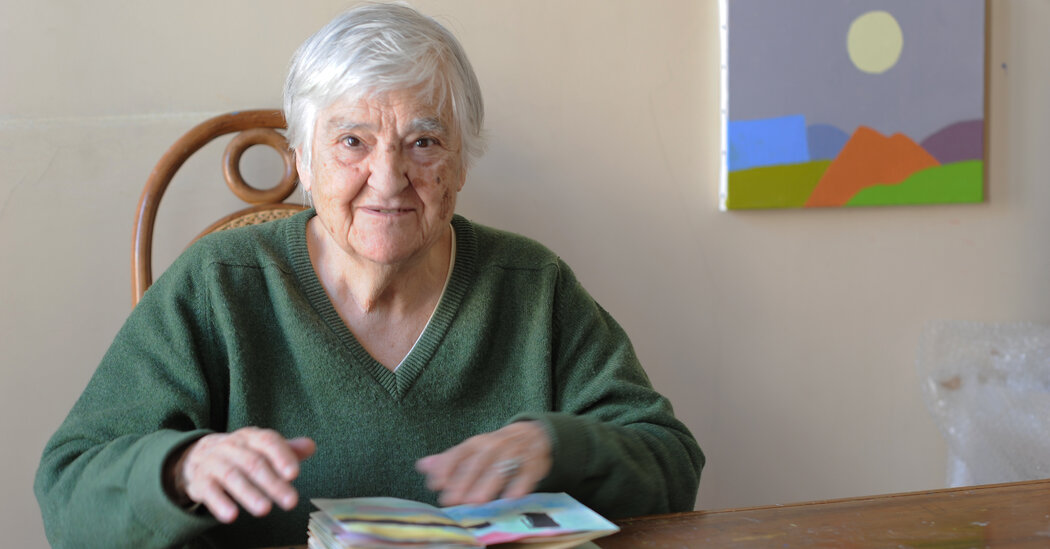 Etel Adnan was born on Feb. 24, 1925, in Beirut, Lebanon. Her father, Assaf Kadri, a Syrian born in Damascus, was a retired high-ranking official in the Ottoman army and a former classmate of Mustafa Kemal Atatürk, the founding father of the Republic of Turkey. Her mother, Rosa Kadri, grew up in the city of Smyrna (now the Turkish city of Izmir), which was largely destroyed by fire in 1922.

Her father changed the family’s surname to Adnan, which was his father’s first name, in 1932. Ms. Adnan has said that her father was “an unemployable man” by the age of 40 and that she grew up “with people who were defeated when they were still young.”

Ms. Adnan said she had been moved to begin writing verse as an act of opposition to the Vietnam War, becoming, in her words, “an American poet.”

Years earlier, in reverse fashion, it was her teaching that propelled her to the canvas.

“The head of the art department wondered how I can teach such a course without practicing painting,” she told The Paris Review Daily. “She gave me crayons and bits of paper, and I started doing little works, and she said I didn’t need any training, that I was a painter. So I kept going.”

Ms. Adnan returned to Lebanon in 1972 and shortly thereafter met Ms. Fattal, an artist, in Beirut. Ms. Adnan spent the next few years working as a cultural editor for two of the city’s daily newspapers.

After civil war broke out in 1975, she fled with Ms. Fattal to Paris. It was there that she wrote “Sitt Marie Rose,” which was originally published in French, the language she knew best. (Like many Lebanese people, she attended a French school while growing up and could be punished for speaking Arabic, she said.) The novel was unavailable in Lebanese bookstores for many years because its political undertones were deemed too controversial.