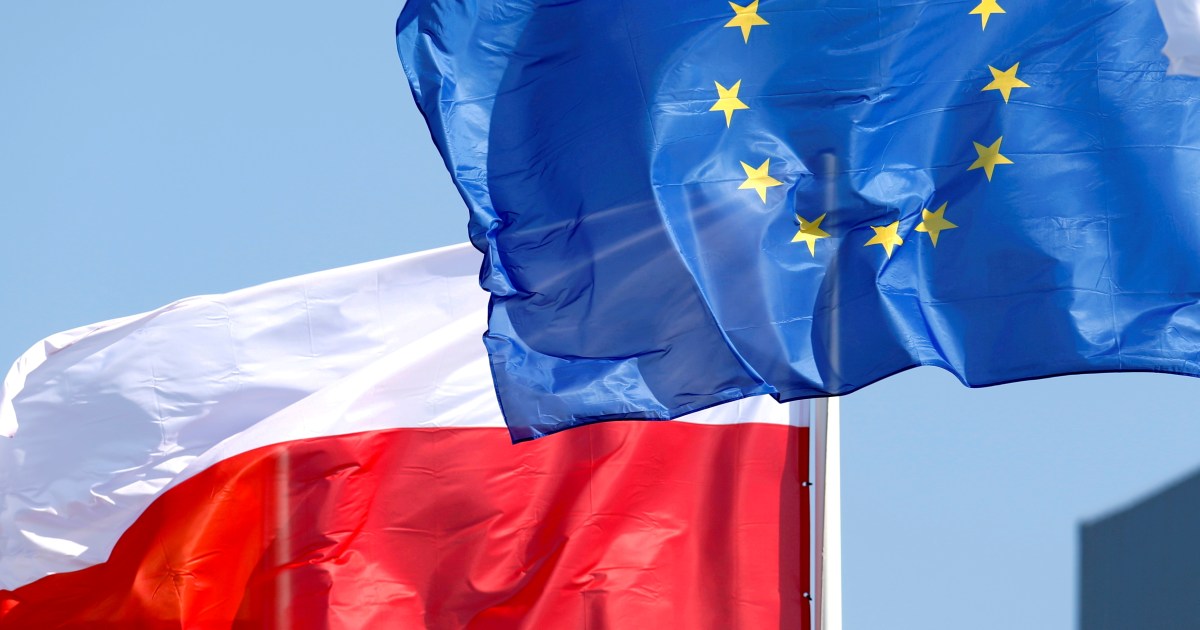 Leading European politicians accuse Warsaw of ‘playing with fire’ in an acrimonious dispute over the primacy of EU law.

A Polish court ruling challenging the supremacy of European Union law has plunged the bloc into an existential crisis, increasing fears among EU policymakers and many Poles that Poland could eventually quit the EU.

Politicians across Europe voiced dismay on Friday at the ruling by Poland’s Constitutional Tribunal on Thursday that parts of EU law are incompatible with the Polish constitution, undermining the legal pillar on which the 27-nation EU stands.

Ursula von der Leyen, president of the European Commission, said she was “deeply concerned” and that the EU executive she leads would do all in its power to ensure the primacy of EU law.

She said in a statement that the EU’s 450 million citizens and its businesses need legal certainty, and the Commission would carry out a swift analysis to decide its next steps.

Though Warsaw and Brussels have been at loggerheads since the Law and Justice (PiS) party came to power in 2015, they are now on a full collision course.

“We have to state clearly that this government in Poland is playing with fire,” Luxembourg’s minister for foreign affairs, Jean Asselborn, said on arrival for a meeting of EU ministers in Luxembourg.

“The primacy of European law is essential for the integration of Europe and living together in Europe. If this principle is broken, Europe as we know it, as it has been built with the Rome treaties, will cease to exist.”

Officials in Brussels said on Thursday’s court ruling could lead to a series of fines and legal cases against Warsaw that will take months, if not years, to play out.

PiS says it has no plans for a “Polexit” and – unlike Britain before its Brexit referendum in 2016 – popular support for membership of the EU is high in Poland.

Poland’s membership of the bloc since 2004 has helped drive some of the fastest economic growth in Europe. With an increasingly assertive Russia unnerving some central and eastern European states that were for decades under communist rule, many Poles see the EU as an essential part of national security.

But, welcoming the court ruling, Polish Prime Minister Mateusz Morawiecki said each member state must be treated with respect and the EU should not be “a grouping of those who are equal and more equal”.

Populist governments in Poland and Hungary have found themselves increasingly at odds with the European Commission over issues ranging from LGBTQ rights to judicial independence.

The Constitutional Tribunal took on the case after Morawiecki asked it whether EU institutions could stop Poland from reorganising its judiciary.

A Eurobarometer survey carried out in June and July 2021 showed that almost twice as many Poles trust the EU as trust their national government.

“I think … there is a risk that we could exit the EU, because all of these actions which are happening can lead to that step-by-step,” said Warsaw pensioner Grazyna Gulbinowicz.

“I think it would have a very negative impact on our overall situation, because things are not easy and without EU funds it will be even more difficult, not to mention the fact that we will feel isolated.”