Compact SUVs have been the rage in India in the last couple of years, and one of the reasons for this spurt in the segment was the MG Hector. MG simply spoilt customers with choices, be it for creature comforts or drivetrain options. But then the advent of the Korean duo of the Kia Seltos and the new-gen Creta came in and turned the segment around on its head, setting new benchmarks! And that pretty much explains the need for the new Hector facelift a bit ahead of the time. Now there’s also a new Petrol CVT automatic variant alongside the dual-clutch automatic that joined the range, and we exclusively tell you how the SUV performs in our review. 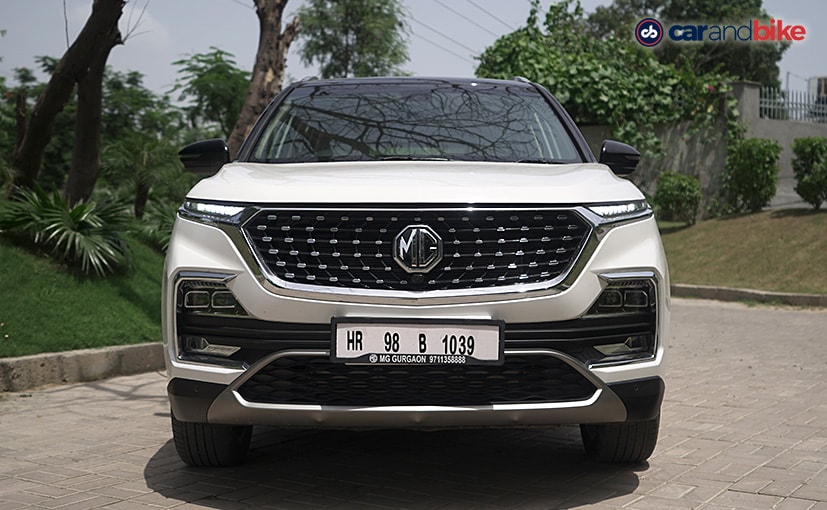 The new chrome stud grille on the hector facelift looks marginally smaller and the face a touch less imposing.

The updates are subtle but do add a sense of freshness. The most prominent update is in its face and that begins with this new chrome-stud grille with chrome fringes extending to the DRLs as well. Blow on the bumper the bash plate is finished in gunmetal and you get a different mesh pattern now. Now the face does look a bit mellowed down as the one on the previous Hector looked very butch because that grille was massive. The facelifted model! Not so much. 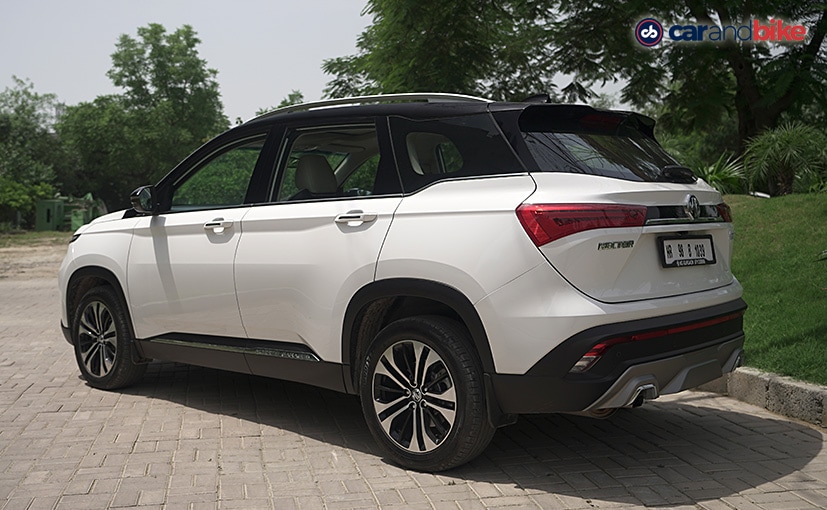 The new 18-inch alloy wheels and optional dual-tone body colours too add up to that swanky appeal. At the rear, the only change is a black applique replacing the bold reflectors between the taillights. 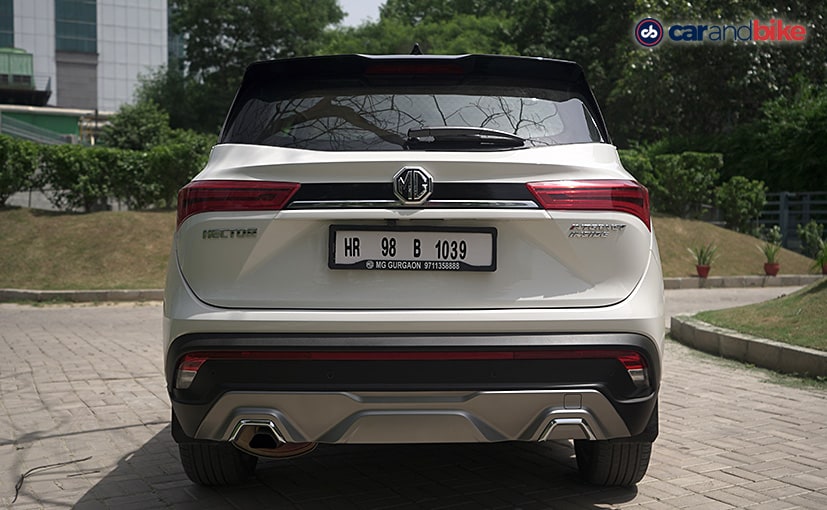 The rear remains largely unchanged and the only change is a black applique replacing the bold reflectors.

The new Hector is better suited for the urban jungle, looks more modern. Yes! it does look a touch less imposing, but well groomed, just like Benedict Cumberbatch after a decent haircut. I am sure you get the drift! 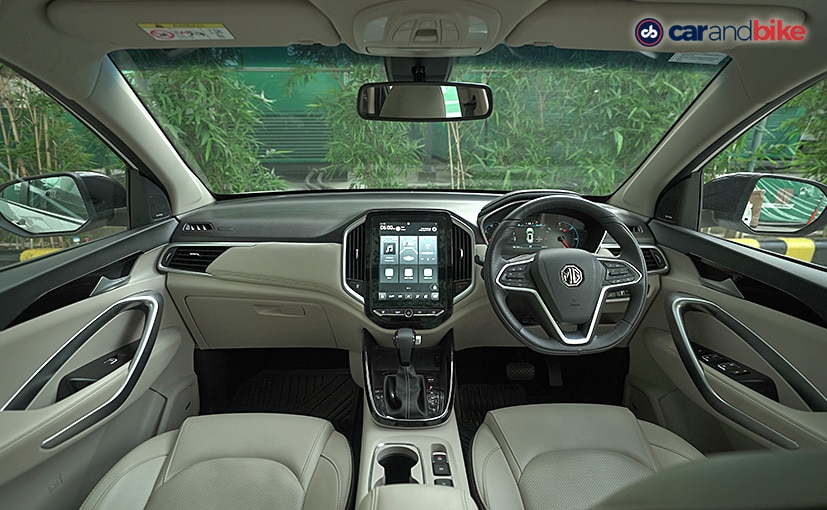 The cabin on the new MG Hector is finished in dual-tone and champaign-black and it adds to the sense of space in an already spacious cabin.

The cabin undergoes a sea of change. The most significant upgrade for me are the ventilated seats especially when most of the year, the weather in India is hot and sultry, they do keep you cool! But the only thing I feel awkward are the buttons, they are positioned at the side of the central console while you have got more space on the central console. So ergonomically it would have worked better having it next to the cup holders. 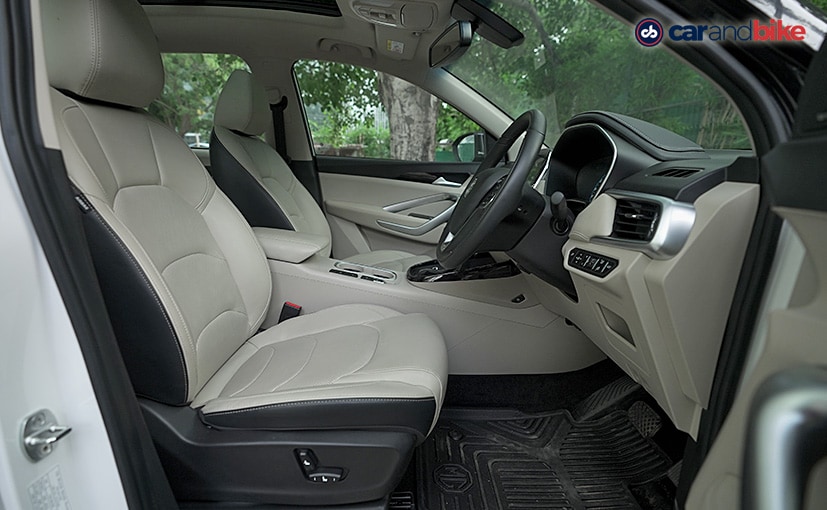 Now the cabin is finished in dual-tone and champagne-black is the colour option you get. Then the piano black highlights and even the silver highlights go well with the arrangement and it adds to the sense of space in an already spacious cabin. On the inside the Hector facelift never fails to impress. Finish and comfort level have gone up by a notch and you also get more creature comforts now. 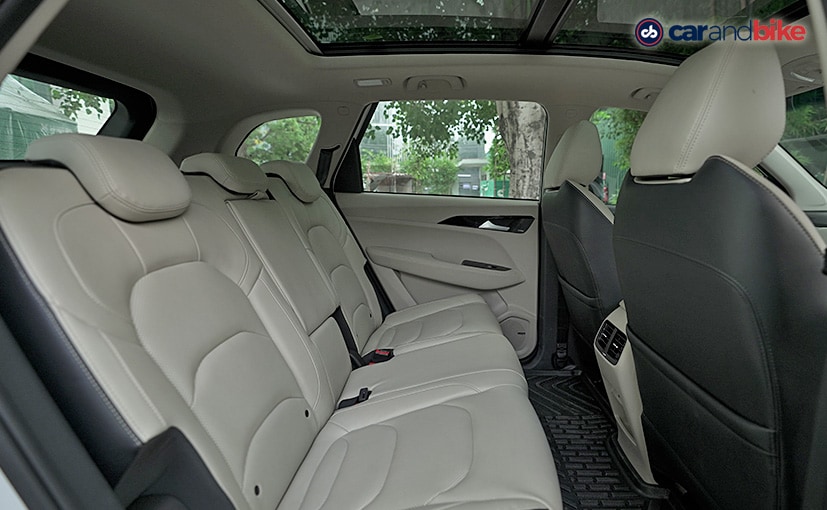 The rear seats are comfortable offering decent thigh and lumbar support while the legroom too is impressive.

You have wireless charging you and also in the CVT you have got Eco mode and electronic parking brake with the automatic of course. Now the 10.4-inch infotainment screen remains the same but software has been upgraded. The iSmart connected tech is upgraded with 35 more Hinglish commands like Sunroof Kholo or gaana bajao! We all love to play around with it, don’t we! 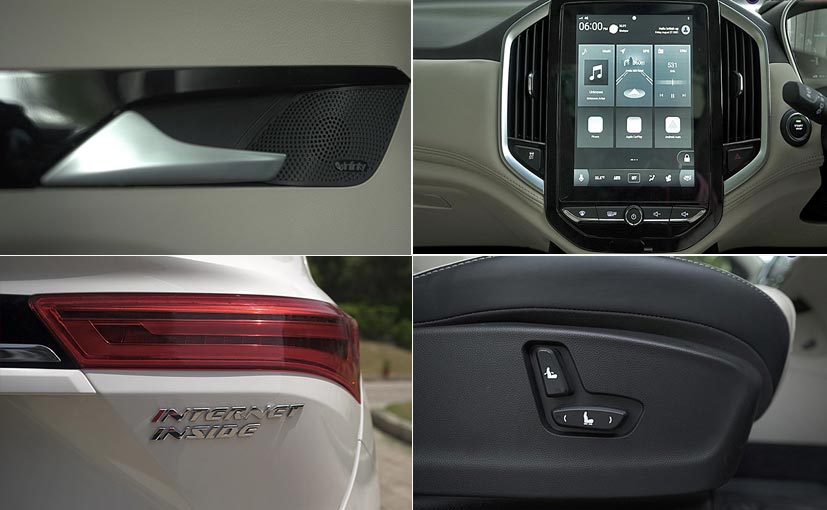 The Hector now becomes even smarter with the updated iSmart connected car tech and premium features like powered front seats and the Infinity sound system remain.

It never fell short on features by any stretch of the imagination and bits like the i-Smart connected car suite with OTA updates, a large panoramic sunroof, auto climate control, cruise control, power adjustable seats for front driver and passenger, ambient lighting and auto-dimming mirrors remain. The Hector now becomes even smarter with features like real-time traffic and road updates where it warns you of signals and speed cameras, turns and curves ahead and the speed limit as well! 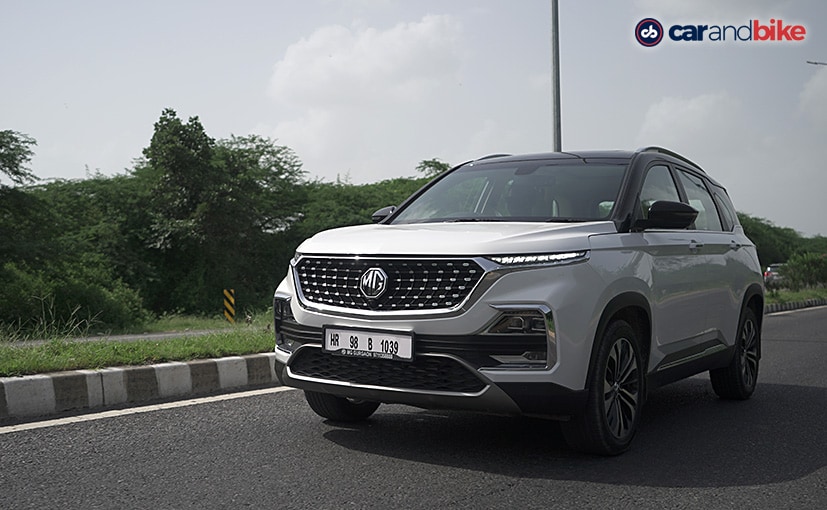 The MG Hector CVT feels quite evidently different from the DCT, it’s a bit smoother and more refined. 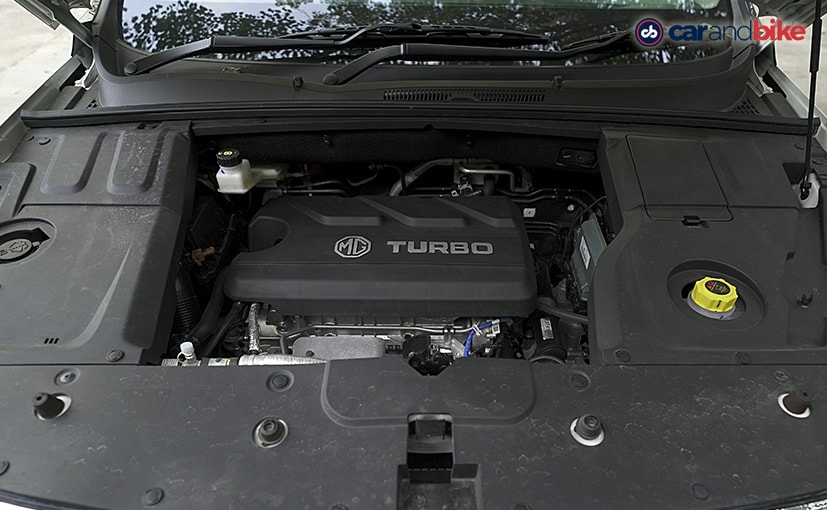 The same 1.5-litre petrol engine is mated to an eight-step CVT transmission.

Yes! It has more credentials now to take on rivals like the Creta, Seltos or even the new duo from the VW group, the Taigun and the Kushaq when it comes to in-cabin experience and obviously things have changed behind the wheel as well! The same 1.5-litre petrol engine that belts out 141 bhp at 5000 rpm and 250 Nm of peak torque at 1600-3600 rpm is mated to an eight-step CVT gearbox and promises to be more fuel efficient and smoother in city driving condition or in bumper-to-bumper traffic.

The CVT feels quite evidently different from the DCT and it’s a bit smoother and more refined, so that claim stands tall. There’s a perceptible lag at launch and also in shifts but no head nod as such making it better for city usage. Then when you want to stretch, there’s bit of that rubber band effect but then it goes happily around 3,800-4,000 rpm so you’ve got enough power band. 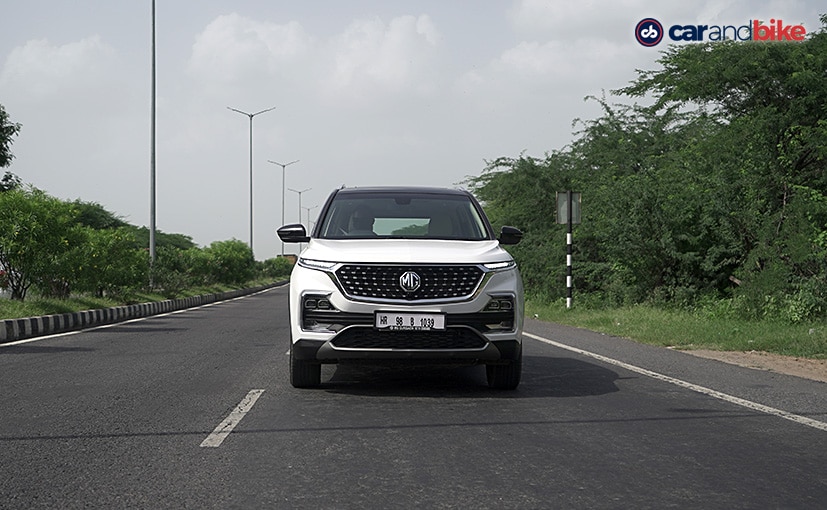 The ride quality of the MG Hector is good but the lateral movement, you constantly feel it.

These 18-inch alloy wheels add to is tautness to an extent and you feel it more while changing lanes or while minor maneuvering. But then, the body rolls are still there. On rough surface the ride quality is good but the lateral movement, you constantly feel it. The steering though! I wish so much that had more character, it just feels a bit dead. Does the job, has weight, but the centre slack is there and also when you’re changing lanes or taking those sharp corners or speed bends, you want it to be more communicative, offering better sense of control. 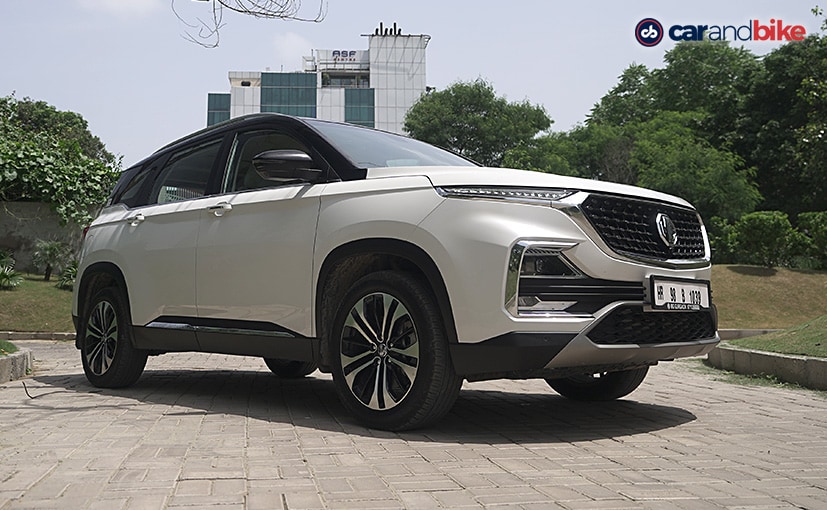 The 18-inch alloy wheels add to is tautness to an extent and you feel it more while changing lanes or while minor maneuvering.

The CVT is a better pick over the Hector DCT as the engine in this combination feels more refined and relaxed. It isn’t grumpy and shift jerks are better contained as well. If anything, there is a nominal torque steer with a quick launch but it’s definitely not unnerving. 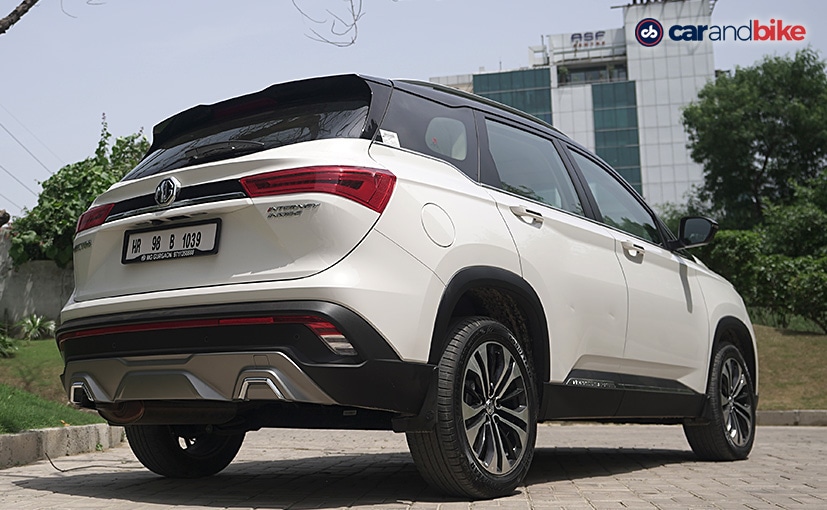 In terms of prices the MG Hector CVT is evenly matched to the DCT.

Ex-showroom prices for the MG Hector CVT begin at ₹ 15.72 lakh for the base shine variant and go all the way up to ₹ 18.38 lakh for the top-end Sharp trim and it is evenly matched to the DCT. But still almost a lakh more than other petrol automatic SUVs in the segment. 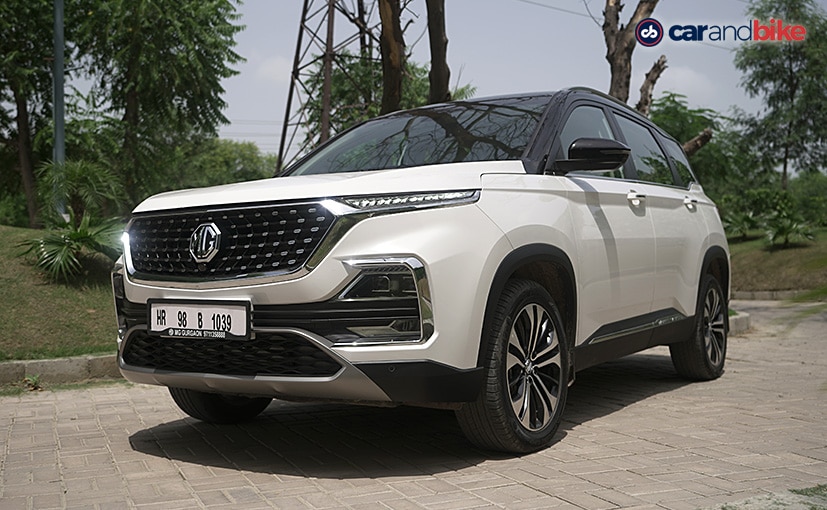 The MG Hector CVT is one the easiest to drive automatic SUVs in its class.

That said, it’s bigger, more comfortable and better equipped. Slightly aggressive pricing would have the case for the Hector CVT even stronger. But for the premium amount, it still is the most upmarket, comfy and easy to drive automatic SUV in its class.

How Car Rentals Explain the 2021 Economy