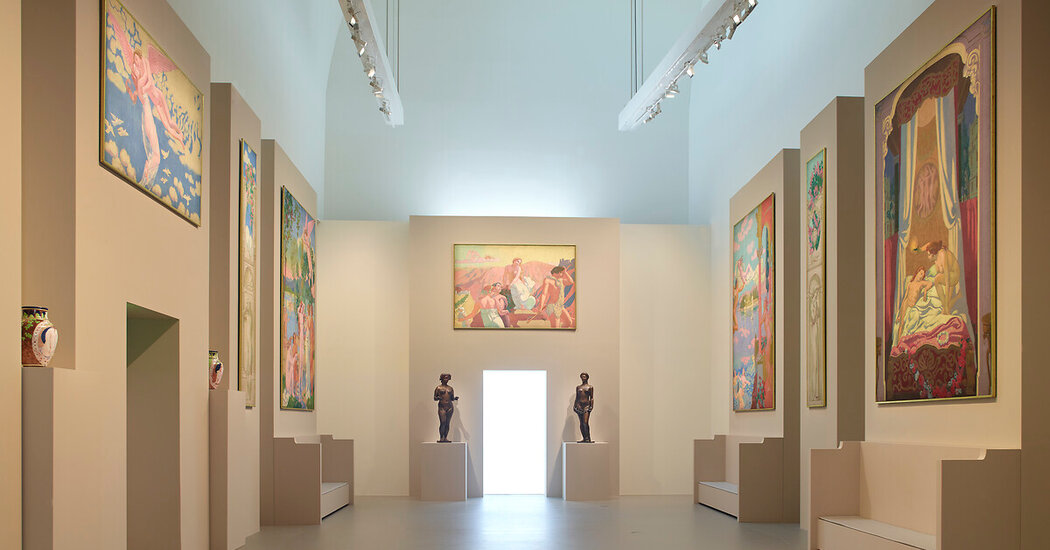 PARIS — Sometimes you yearn for the beauty of small things: the haiku, the string quartet, the miniature engraving. And then other times, tovarishch, you need your beauty as big as the motherland.

“The Morozov Collection: Icons of Modern Art,” which opened last week at the Louis Vuitton Foundation here, brings to Paris a “War and Peace”-scale blast of French and Russian painting — and reunites, for the first time since 1918, one of the two most substantial art collections of pre-revolutionary Russia.

When the French bourgeoisie still disdained the Paris avant-garde, the young Russian textile magnates Ivan and Mikhail Morozov bought the most innovative paintings in the city — and bought in bulk. Gauguin, Monet, Van Gogh, Picasso: All their work came east, and would inspire two generations of Russian successors. Alongside their fellow textile boss and friendly rival collector Sergei Shchukin, the Morozovs made Moscow into the offshore capital of French modern art in the years around 1900.

Then came the October Revolution, when all of the 200 paintings here were expropriated for the national collection. Ivan Morozov went into exile. Under Stalin, the paintings were suppressed, and scattered as far as Siberia.

Now, the Morozovs’ collection has been mostly absorbed into the holdings of the Pushkin State Museum and Tretyakov Gallery in Moscow, and the State Hermitage Museum in St. Petersburg. Their reassembly here, across four whole floors of Frank Gehry’s glass sailboat in the Bois de Boulogne, is legitimately historic in a way few shows can truly claim: as if a whole lost world could be entered, from room to room.

Just get your vaccine passport and go! Nearly a decade in the making, twice delayed by the coronavirus pandemic, “The Morozov Collection” is what touts like to call “once-in-a-lifetime” — or, maybe, twice-in-a-lifetime. Five years ago, the Vuitton Foundation reunited the Shchukin collection in another museum-filling exhibition, whose scholarly heft was matched by its massive popularity.

“The blockbuster of blockbusters,” as I clunkily christened the Shchukin show when I reviewed it in 2016, drew more than 1.2 million visitors, more than any Paris exhibition since King Tut’s horde came to town in 1967. No saying whether this one will top that record, but in every other way the Morozov presentation is the equal of the Shchukin showcase, and might have been even harder to pull off.

Like its predecessor, this one has been curated with cool precision by Anne Baldassari, the former director of Paris’s Picasso Museum, and comes with a backbreaking catalog — indeed the two are almost the same size, to head off any descendants’ gripes.

Like its predecessor, this one required a colossal diplomatic effort, with assurances that French law would protect the Russian museums against any claims by the Morozovs’ descendants, and a personal signoff for the loans from President Vladimir V. Putin.

Like its predecessor, this one had a colossal budget, once again undisclosed. Insurance alone would run well into the millions. Reframing, new glass: another major cost center. The Vuitton Foundation also paid for a pop-up conservation studio in Russia to restore many works here, such as a suite of décorations (or wall-filling paintings) by Maurice Denis that hung in Ivan Morozov’s music room. Complain if you want about big money in the art world, but sometimes it’s not so bad to have the third-richest person on Earth footing your bills.

The show begins in the basement, with nearly two dozen pictures of the Morozov family, including several compelling portraits by the Russian painter Valentin Serov. His portrait of Mikhail, at full length, pictures him in morning dress, rotund and self-assured. Mikhail had a taste for the Parisian cabaret and, especially, its showgirls. (He would die young, at 33.)

Ivan, whose best portrait by Serov appears later, among the Matisses, was more businesslike and Muscovite, though no less experimental in his artistic tastes. They were Old Believers, and relatively new money: Their great-grandfather was a serf who bought his freedom with his wife’s dowry of five rubles.

Like most of Moscow high society, the Morozov brothers were also French-speakers — and found in Paris a cultural domain they could plunge into and bring back home. The exhibition’s first showstopper is a room of mural-scale landscapes by Pierre Bonnard, commissioned for the staircase of Ivan Morozov’s Moscow mansion. The largest are more than 10 feet tall, and they’re profuse with Mediterranean color that must have startled the Russian beau monde at cocktail hour. Gauguin was another source of brilliant color, and a dozen Tahitian pictures of staggeringly high quality pervade their own gallery here.

The Shchukin presentation had an all-Gauguin room, too, and that show and this one both offer incredible helpings of Cézanne, Monet and Matisse. But the Russians were dissimilar collectors — “Morozov advanced in the shadow, Shchukin in the light,” one contemporary of theirs said — and so these are dissimilar shows.

Shchukin was bolder, especially in collecting Picasso, but Ivan Morozov had the better eye. Shchukin went all in on French art, while the Morozovs also collected Russian artists; there’s an illuminating pairing here of an airy Renoir party picture and a plein-air boating scene by the Russian painter Konstantin Korovin. (He also taught the Morozovs to paint when they were young.) Shchukin bought on impulse; Ivan Morozov could wait a whole year, and conceived of his collection as a museum in the making.

And “The Morozov Collection” puts a premium on this systematic, serial approach to collecting, grouping paintings together into thematic ensembles where French and Russian artists hang side by side. A flawless painting of an acrobat from Picasso’s rose period, acquired after Leo and Gertrude Stein parted with it, faces off with an indecently sexy dual portrait, by Ilia Machkov, of him and another artist posed with dumbbells and musical instruments. (Sound mind, sound body.) Landscapes by Van Gogh and André Derain mingle with those of Natalia Goncharova, who would become a key figure of the Soviet avant-garde

The show breaks from this thematic approach only once, for one of the most storied paintings in the Morozov collection: Van Gogh’s bereft “The Prison Courtyard,” done in the last year of his life from the asylum of Saint-Rémy. On loan from the Pushkin, it’s been hung apart from the Morozovs’ other Van Goghs in a dimmed room, under a spotlight — to pump up its despondency, I suppose, though to my eye the lighting felt more appropriate to a Moulin Rouge revue.

They stupefy in equal measure, the Shchukin and Morozov collections, yet the two Vuitton Foundation shows have radically different tones in their final acts. The last one ended with the shock of the new: abstract paintings by Malevich, Rodchenko and other Soviet innovators, taking up the banner of modernism in the new Soviet Union. This show concludes with a requiem for the past, in the form of Morozov’s music room, reconstructed as it was in 1909. The Denis décorations, painted on site in Moscow, illustrate the myth of Cupid and Psyche with a lysergic palette of pinks and blues. The curator has even chosen to pipe in light music, as if ghosts from the last days of the Romanovs were still among us.

A century ago the Denis décorations set off a fevered debate among the intellectuals and connoisseurs of czarist Moscow. Now they appear more as a minor intermezzo before the big upheaval to come. No dynasty endures forever: not the Morozovs’, and certainly not the one that nationalized their mansion. Eventually the culture moves on — the paintings come back to Paris, and Louis Vuitton opens a concession in Red Square.

The Morozov Collection: Icons of Modern Art
Through Feb. 22 at the Louis Vuitton Foundation, Paris; fondationlouisvuitton.fr.

Washington to let Julian Assange serve sentence in Australia if convicted after extradition to US, legal document shows