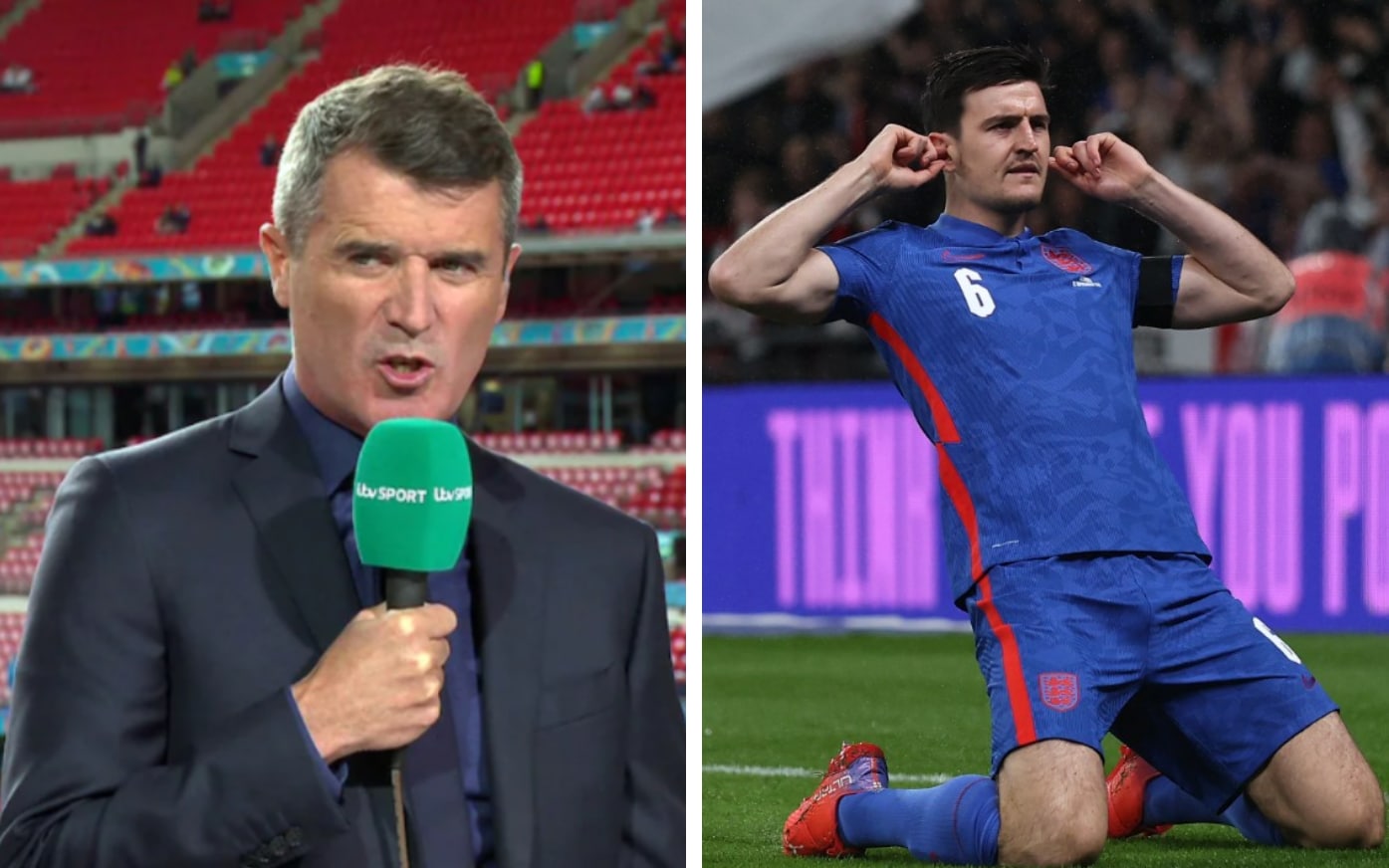 Wherever he goes, Harry Maguire seems unable to shake off the presence of Roy Keane – Sky Sports, ITV on a Friday night, indeed the Manchester United captain may even be tempted to look over his shoulder these days in the studios of MUTV, where another United captain once sealed his Old Trafford fate 16 years ago.

Maguire has been in Keane’s crosshairs in recent weeks – his impersonation of the younger man in the studio before United’s win over Tottenham Hotspur on Oct 30, will have been one of Sky Sports’ best viewed clips on social media. “I heard Maguire talking during the week [while looking back on the 5-0 defeat to Liverpool] – he was like a robot!” Keane said, essaying an accent of uncertain provenance. “ ‘Apologies to the fans’ – there’s no emotion behind it!”

Keane was back on the case at half-time on ITV’s Friday coverage of England against Albania after Maguire’s goal celebration. Not the defender’s finest moment, especially as he could not decide whether to cup his ears or stick his fingers in them and a gesture likely to create more problems than it solved. Nevertheless, it did not warrant the response from Keane, who considered it unforgivable. “He’s put his hands to his ears [as if to] shut the critics up,” he said. “I think that’s embarrassing. He has been a disgrace for the last few months for Man United. He thinks if he scores he’s going to shut his critics up. That’s embarrassing”.

This is the textbook Keane punditry: disgrace, embarrassment, unacceptable, don’t-they-know-they-play-for-Manchester-United. It has some merits as a form of entertainment and it cuts up nicely into social media clips but there is precious little insight.

This is also Keane punditry: “We talk about this game of football, it is about shutting people up and Harry has done that tonight.” That was about Harry Kane, and showed Keane in a surprisingly forgiving mood towards a player recently out of form. It was delivered on Friday night about 90 seconds before he launched at Maguire for supposedly responding to his critics.

Consistency of performance – as both Maguire and Keane would acknowledge – can be a challenge whether one is on the pitch or in the broadcasters’ seats. Keane would sooner criticise anyone other than his old team-mate Ole Gunnar Solskjaer, whom he presents as the victim of events at United rather than the architect. Keane recently suggested that Solskjaer was sadly powerless to stop himself selecting the midfielder Fred. He is less eager, for example, to examine why Solskjaer does not select another £35 million midfielder who never plays, Donny van de Beek.

As for Maguire – his season so far has been a classic case of how trying to do the right thing can lead one down a different path. He came back much too early from injury to play in United’s disastrous defeat by Leicester City and since then it has been a torrid time for him. After the calamitous defeat by Liverpool at Old Trafford, the representatives of the broadcasters who pay a fortune for rights were told that Maguire had volunteered to United’s press team to do the post-match interviews.

He even referenced that decision in one of his interviews, “I am here because I have to be here”, which was interpreted in some quarters as resentfulness. In reality it was because he recognised that part of the captain’s job was to be the public face of the team when one has just been beaten 5-0 at home by one’s biggest rivals. Come the following weekend, Keane offered his robot analysis and Maguire’s fate in that respect was sealed. He might be forgiven for wondering why he had even bothered trying to explain in the first place.

In the midst of all this, Gareth Southgate pointed out last Thursday, when he announced a squad that included Maguire, that other players might have found it “easy to stay in the treatment room a bit longer”. “He [Maguire] is always fronting up, always prepared to take whatever is coming and in your professional career, a lot is playing matches where you’re not 100 per cent fit,” Southgate said. “People maybe don’t even know that when you take the field and they just judge you as they see.”

That is the kind of insight broadcasters pay good money to hear, hinting at the truth of the matter without having to break a confidence. Whether Keane heard it is not clear. He seemed unsure on Friday night why Mason Greenwood was not in the squad when it had been made clear by Southgate the week previous that the player had withdrawn from the previous seven World Cup qualifiers.

Onwards into another minor United catastrophe. This one unwittingly orchestrated by the club’s own “CEO of media”, a man who it would be right to say knows how to read a “fan sentiment graph” but does not seem to realise that it is wise never to mention the existence of said graphs. Phil Lynch’s interview on how United manipulate fans’ moods on social media by formulating the posts of their players provoked outrage, especially with Gary Neville.

“Devastating for the [United] players!” Neville claimed on Twitter. Yet not every United player rings the aforementioned Lynch when he composes a tweet. Indeed, Maguire writes his own and if they sound a little too polished at times, then perhaps that might be his fault for paying attention at school. Unfortunately for Maguire, along with much else that has happened, the horse was already out the stable door and his picture adorned the graphic for a newspaper column Neville authored on the subject.

If Maguire goes back to the start of the ITV coverage on Friday night, he will hear Keane reflect on Southgate’s loyalty to certain players. “There’s no doubt Harry Maguire is a very good player,” Keane said. “You hope that when you show loyalty [as a manager] you get it back”. Maybe Keane does rate Maguire, after all. It is just that Keane does not have anything as a pundit between the two extremes, which is how you go from “good player” back to “a disgrace” in the space of 45 minutes.

Marta Ortega, Daughter of Inditex Founder, Will Lead the Company