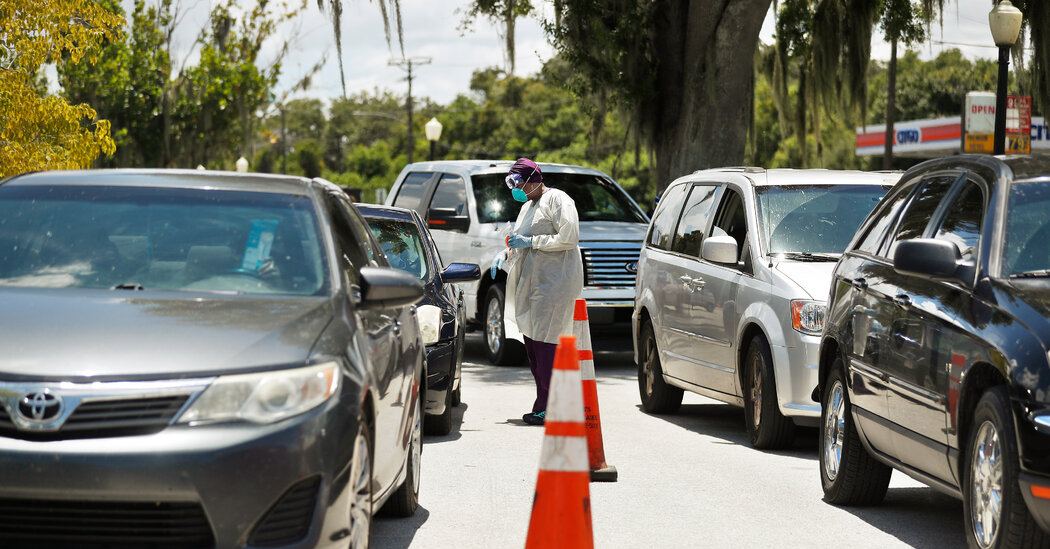 Has the Delta-fueled Covid-19 surge in the U.S. finally peaked?

The number of new daily U.S. cases has risen less over the past week than at any point since June, as you can see in this chart:

There is obviously no guarantee that the trend will continue. But there is one big reason to think that it may and that caseloads may even soon decline.

Since the pandemic began, Covid has often followed a regular — if mysterious — cycle. In one country after another, the number of new cases has often surged for roughly two months before starting to fall. The Delta variant, despite its intense contagiousness, has followed this pattern.

After Delta took hold last winter in India, caseloads there rose sharply for slightly more than two months before plummeting at a nearly identical rate. In Britain, caseloads rose for almost exactly two months before peaking in July. In Indonesia, Thailand, France, Spain and several other countries, the Delta surge also lasted somewhere between 1.5 and 2.5 months.

And in the U.S. states where Delta first caused caseloads to rise, the cycle already appears to be on its downside. Case numbers in Arkansas, Florida, Louisiana, Mississippi and Missouri peaked in early or mid-August and have since been falling:

We have asked experts about these two-month cycles, and they acknowledged that they could not explain it. “We still are really in the cave ages in terms of understanding how viruses emerge, how they spread, how they start and stop, why they do what they do,” Michael Osterholm, an epidemiologist at the University of Minnesota, said.

One involves the virus itself. Rather than spreading until it has reached every last person, perhaps it spreads in waves that happen to follow a similar timeline. How so? Some people may be especially susceptible to a variant like Delta, and once many of them have been exposed to it, the virus starts to recede — until a new variant causes the cycle to begin again (or until a population approaches herd immunity).

The second plausible explanation involves human behavior. People don’t circulate randomly through the world. They live in social clusters, Jennifer Nuzzo, a Johns Hopkins epidemiologist, points out. Perhaps the virus needs about two months to circulate through a typically sized cluster, infecting the most susceptible — and a new wave starts when people break out of their clusters, such as during a holiday. Alternately, people may follow cycles of taking more and then fewer Covid precautions, depending on their level of concern.

Whatever the reasons, the two-month cycle predated Delta. It has repeated itself several times in the U.S., including both last year and early this year, with the Alpha variant, which was centered in the upper Midwest:

We want to emphasize that cases are not guaranteed to decline in coming weeks. There have been plenty of exceptions to the two-month cycle around the world. In Brazil, caseloads have followed no evident pattern. In Britain, cases did decline about two months after the Delta peak — but only for a couple of weeks. Since early August, cases there have been rising again, with the end of behavior restrictions likely playing a role. (If you haven’t yet read this Times dispatch about Britain’s willingness to accept rising caseloads, we recommend it.)

In the U.S., the start of the school year could similarly spark outbreaks this month. The country will need to wait a few more weeks to know. In the meantime, one strategy continues to be more effective than any other in beating back the pandemic: “Vaccine, vaccine, vaccine,” as Osterholm says. Or as Nuzzo puts it, “Our top goal has to be first shots in arms.”

The vaccine is so powerful because it keeps deaths and hospitalizations rare even during surges in caseloads. In Britain, the recent death count has been less than one-tenth what it was in January.

In a few countries, vaccination rates have apparently risen high enough to break Covid’s usual two-month cycle: The virus evidently cannot find enough new people to infect. In both Malta and Singapore, this summer’s surge lasted only about two weeks before receding.

More on the virus:

“I thought my service alongside the Americans meant I would be saved when they left,” Rasheed, an Afghan, writes in The Times.

This was supposed to be a “Summer of Freedom.” It was not, Jennifer Finney Boylan says.

The many lives of fake art

What happens to works of art that turn out to be fake? In many cases, they re-enter the market: One art dealer has been offered the same fake Egon Schiele painting 10 times by 10 different collectors.

Since what determines a fake is often nothing more than an expert’s opinion, owners who have paid a lot for a work are not always ready to believe that they have been duped. Many of the works are recycled to unsuspecting buyers, as Milton Esterow reports in The Times. Some universities also have fakes in their collections that they use as study tools.

“We have about 1,000 objects that were donated as fakes by dealers, collectors and auction houses,” Margaret Ellis, a professor emerita at New York University, said, adding, “These help students know what they are looking at and can be extremely educational when you put them side by side with the real work.”

Perhaps the most interesting fate for an art fake is to become set dressing in F.B.I. stings. The agency keeps thousands of fakes in storage — and once used six in a case that involved five bikini-clad undercover agents, a yacht off the coast of Florida and two very real French mobsters. Read more. — Sanam Yar, a Morning writer