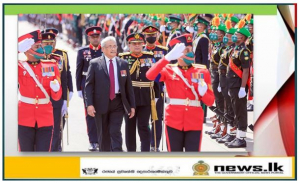 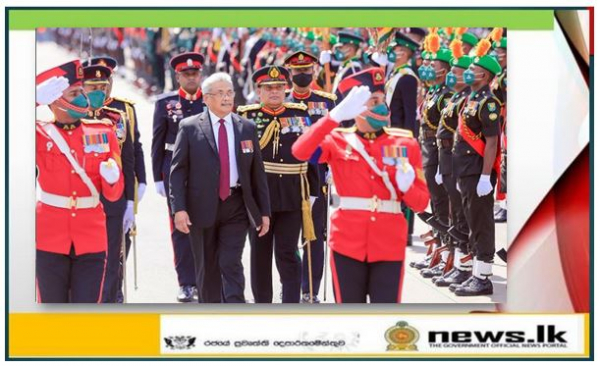 HE the President Gotabaya Rajapaksa’s participation in the 72nd Army Day Anniversary celebration agenda at Anuradhapura, Saliyapura Gajaba Regiment’s Regimental HQ on Sunday (10) is indeed a landmark visit, not only it was done by Head of the State for the first time, but also because of his unforgettable intimacy and attachment that takes him down memory lane as a former warrior in the Sri Lanka Army, for that matter in the prestigious Gajaba Regiment (GR).

His visit was historic, multifarious and has few firsts; he joins history as the GR-fostered first President of the country, the first President to join an Army Day and receive honours at Saliyapura, the first visit to the GR Headquarters after taking the mantle of Presidency in November 2019 and the first President to be accompanied to the location by the then Adjutant, now the incumbent Army Chief, groomed by the same prestigious GR itself when HE the President was commanding the 1 GR. His succession to Presidency also joins history since he is the first Commanding Officer of the 1 GR to have reached these impressive heights.

It was the President Gotabaya Rajapaksa who served as the Second-in-Command of the 1st Battalion of the GR, no sooner than the GR was founded on 14th October 1983 by Lieutenant Colonel Vijaya Wimalaratne after amalgamation of the Rajarata Rifles. Although the young Officer upon receipt of his commissions on 26 May 1972 was posted to the Sri Lanka Signal Corps, and subsequently to the Sri Lanka Sinha Regiment as an infantryman at that time, he began flexing his muscles only after joining the GR as a pioneer member of the Keterian family.

In his first military mission, the enthusiastic and budding GR officer energetically and voluntarily pursued fleeing terrorists along with GR members of his battalion and destroyed them when they attacked the Mahavilachchiya Police Station in 1985, demonstrating bravery and determination. Similarly, it was he who commanded the men when the Muttur military base came under siege of the terrorists. He was compelled to march infiltrating dense jungles covering more than 35 km to reach the sieged military base with his troops before he confronted terrorists and managed to merge with friendly forces while consolidating the security of the camp.

In another offensive, the ‘Operation Liberation’ in 1987 to liberate Vadamarachchi, he was instrumental in taking a leading role in order to wipe out clutches of brutal terrorism as a true member of the Keterian family in the 1 GR Battalion. Again in 1990, he was fortunate to be under the command of the reputed military veteran, Major General Denzil
Kobbekaduwa who launched the military operation, ‘Thrivida Balaya’ in order to rescue desperate troops under siege inside the Jaffna Fort without any supply route whatsoever.
No doubt, his commitment to the cause earned him military decorations such as ‘Rana Wickrama Padakkama’ and ‘Rana Sura Padakkama’ three times and his acts of bravery in the face of the enemy were lauded by his superiors.

In view of his career prospects, Lieutenant Colonel Gotabaya Rajapaksa was afterwards appointed to the office of Deputy Commandant at the then Sir John Kotelawala Defence Academy, a post he held until his early retirement from the Army in 1992.

The golden chapter that went into history commenced in earnest upon this outstanding character’s return to the country and took over the demanding seat of the Secretary to
Ministry of Defence in November 2005 at a time all walks of life in our country were immensely suffering due to fierce terrorist attacks, suicide bombings and the spate of brutal
bloodbaths causing uncertainties in society. So much so Gotabaya Rajapaksa, the Secretary Defence had to take the brunt of life-threatening challenges as the ‘War for Peace’ was in the offing after so many rounds of negotiations and ‘so called’ peace talks with terrorists were collapsing one after the other. In December 2006, the ex-military leader cum the Secretary Defence had a narrow escape when LTTE terrorists rammed an explosive-laden vehicle into his car, but he survived the assassination attempt with minor injuries.
Unbowed and undeterred, Gotabaya Rajapaksa went on strategizing, planning, coordinating, motivating and managing with resources, highly required for smooth conduct of
military operations against LTTE terrorists until durable peace was restored after the defeat of terrorists in May 2009.

In recognition of his immense contribution to the victory over terrorism, the University of Colombo conferred an Honorary Doctorate on President Gotabaya Rajapaksa soon after the culmination of the fight against the world’s most ruthless terrorist outfit. Upon the conclusion of the violent war, the visionary leader oversaw the Army involvement in de- mining, reconstruction, resettlement and the globally-recognized rehabilitation of ex-combatants, a unique feature that attracted all. He also ensured the gradual and methodical transition of law enforcement agencies to serve as peacetime proponents while effectively consolidating national security, their participation in national development as well as the intelligence apparatus.

His conceptual inspiration of hope to permanently injured War Heroes saw they are housed in comfortable environment for continuation of their therapeutic care and medical
treatment which cannot be easily done within domestic facilities. To make the remainder of their lives more pleasing and productive, President Gotabaya Rajapaksa initiated the construction of wellness centres, like ‘Mihindu Seth Medura’ and ‘Abimansala’ which are now fully functional bringing a sigh of relief to all those differently able servicemen who had selflessly sacrificed their physical organs, legs and limbs to make a better tomorrow for all Sri Lankans.

HE the President Gotabaya Rajapaksa as a member of the family of Keterians by gracing the Army Day on Sunday (10) once again reaffirms his unfailing respect, devotion,
appreciation and recognition he has towards the role of armed forces in the country and his continued confidence in the troops who strongly believe, ‘Nothing is Impossible’ for
them.
SL Army