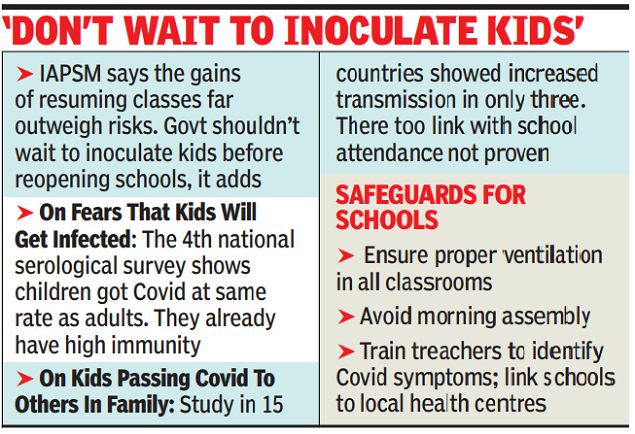 NEW DELHI: The Indian Association of Preventive and Social Medicine (IAPSM), a consortium of some of the leading public health experts in the country, has strongly advocated reopening all schools in the country.
It issued an advisory stating that the gains from resumption of academic activities far outweigh the risks involved, and that the government must not wait for vaccination among kids to resume classes.

Dr Suneela Garg, IAPSM president, told TOI that even the pre-school classes should resume. “Many states, for example Delhi, are prioritising opening of schools for older children. There is no logic behind this. If at all, evidence shows, younger children have the lowest risk of developing severe infection and therefore we should prioritise opening pre-schools and primary classes first,” she said.

The IAPSM has shared a copy of its recommendations on resumption of schools with the Union health ministry, Indian Council of Medical Research, Niti Aayog and the department of education for necessary action.

There are two main concerns around sending children to schools. First, children getting infected with SARS-CoV-2, the virus that causes Covid-19, and the risk of severe infection among them, and second, children transmitting infection to other family members, especially elderly, the advisory states.

“Data from Indian states, including the latest and fourth national sero survey, shows that children have already got Covid-19 infection at a similar or even higher rate than adults (mostly asymptomatic and with far lower rate of moderate to severe disease). Therefore, they are already protected and not at additional risk,” the advisory says.

About the fear of children spreading infection to the family members, the expert group quotes a report from 15 countries on school re-opening and a surge in Covid-19 cases. “Only three countries observed an increase in transmission due to school reopening. However, this surge was not proven scientifically to be linked to school attendance,” the advisory says.

Schools have remained closed in most parts of the country for over a year on account of widespread cases of Covid-19. Chandrakant Lahariya, a leading public health expert and co-author of the IAPSM advisory, said it was causing a serious problem for the physical and psychological well-being of children. “Not all children have mobiles and laptops to attend virtual classes. Also, this is not a long-term solution. We must open the schools,” Lahariya said.

While Delhi has a positivity rate of less than 0.1%, states such as Maharashtra and Kerala continue to have high positivity rates. Dr Lahariya said that, if at all, localised epidemiology can be taken into account for closure of schools in particular areas to prevent disease spread in future.

The safeguards suggested by IAPSM while reopening schools include proper ventilation in classrooms, avoiding morning assembly for the entire school and training teachers to identify respiratory symptoms. The expert group has also recommended linking the schools to local health facilities or strengthening the school health programmes.

On the need for vaccination among children, the IAPSM states that there is no evidence that vaccination for kids is essential. “In more than 175 countries, schools are open but no country in the world has vaccinated children younger than 12 years. The risk of moderate to severe disease is already very low among children,” IAPSM says.