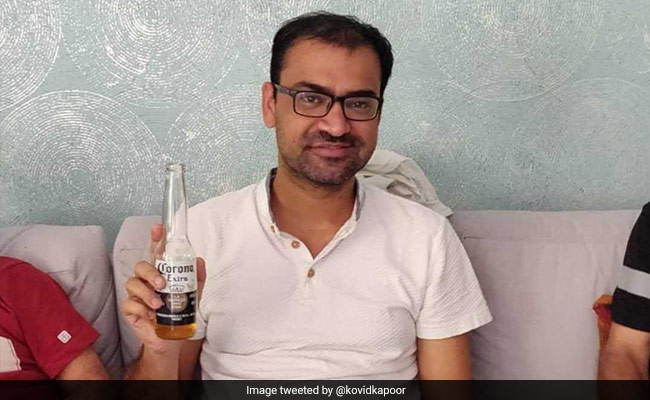 Kovid Kapoor has gone viral for his name.

Before 2020, “Corona” was just another beer in the market and “Kovid” was just another name. The coronavirus pandemic, of course, changed all of that – and nobody is feeling its effect more than the co-founder of Holidify, Kovid Kapoor.

Mr Kapoor — who has had to change his Twitter bio to “My name is Kovid and I’m not a virus” — recently detailed his experience of travelling abroad in a Twitter thread that has gone viral on the microblogging platform. “Went outside India for the first time since COVID and got a bunch of people amused by my name,” he wrote, adding: “Future foreign trips are going to be fun!”

Went outside India for the first time since COVID and got a bunch of people amused by my name. ????

Future foreign trips are going to be fun!

Mr Kapoor further explained that his name actually means “scholar” or someone who is learned, and comes from the Hanuman Chaleesa. Unlike the highly-infectious disease that has upended lives across the world, “Kovid” is actually pronounced with a soft “d”.

For those on this thread, wondering what my name actually means – it means scholar / learned.
Comes in the Hanumaan Chaleesa.

His tweet, shared on Tuesday, has gone viral with over 30,000 ‘likes’ and a ton of amused comments. Take a look at some of the reactions it has garnered:

Now that you mention it…. pic.twitter.com/90FutdBcnF

Meanwhile, Mr Kapoor detailed some of the funniest name-related incidents in a separate Twitter thread.

He revealed that his friends ordered a cake for his 30th birthday, but the bakery assumed they had misspelled his name and helpfully ‘corrected’ it.

For my 30th bday, my friends ordered a cake – and Amintiri automatically assumed that it’s some kinda joke, and it should be spelled with a C not a K. ???? pic.twitter.com/3jrySteSbC

At Starbucks, he mostly uses a fake name now. “Kabir Kapoor” is his go-to when he is not in the mood for jokes.

At Starbucks, the guy handing me the coffee pointed out the name to everyone else and they burst out laughing – I mostly use a fake name now. ☕️ pic.twitter.com/79STYv2uG6

Once, someone found his name in a newspaper from 2008 and tagged him on Twitter.

When someone in a remote village in UP saw my old photo, from a newspaper, after my IIT selection – from 2008! – at some store, and decided to tag me on Twitter.
(sadly, can’t find the link!)

Another time, a Zoomcar customer care executive confessed that he was laughing about his name with colleagues.

A Zoomcar customer care guy called me, to process some pending refund, and told me that he had been laughing in the room with the other customer care folks before the call. ????

“Apart from these, there have been tens of funny micro-interactions, with Amazon delivery guys, with electricians, at airport security, at hotel check-ins, etc,” said Kovid Kapoor. “Anyway – life threw me (and all of us) a sour lemon, I just decided to take it all in good humour and make some lemonade out of it,” he added.