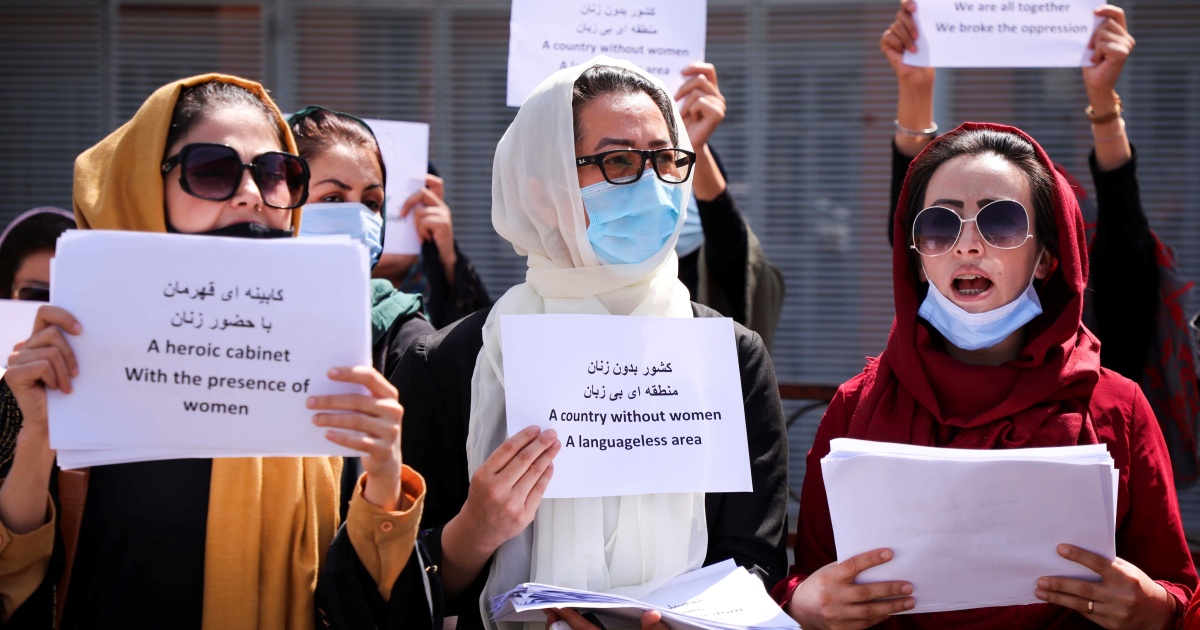 On August 30, just one day before the American deadline for withdrawal from Afghanistan, I messaged Parwana (not her real name) on WhatsApp to see how she was doing.

“No help for now … but we are good so far. I can at least move around with a proper hijab and a mahram [a male family member as a chaperone],” she replied with a hint of resignation.

Parwana had been due to leave on a plane out of Kabul airport in the last days of Western evacuation efforts, but a last-minute glitch prevented her departure. Young, educated and employed by a high-profile international organisation, she was not alone in her situation. I was receiving hundreds of messages from Afghan women like her, all fearing for their future and desperately seeking to escape Taliban-controlled Afghanistan.

Since the Taliban entered Kabul on August 15, I have been leading a volunteer initiative consisting of more than 200 members to help young Afghan women and their families. The idea emerged after a few other former faculty members of the Asian University for Women (AUW) in Bangladesh, where many Afghan women have graduated, and I decided to attempt to assist some 180 Afghan students and alumnae who wanted to flee. Since we launched the effort, I have been in contact with other Afghans desperate to leave as well.

Before the August 31 deadline, Western governments flew out a significant number of Afghans and foreign nationals – more than 114,000 in fact.

But even now, numerous people from various backgrounds are continuing private efforts to evacuate more, out of frustration that the official “West” has failed in its duty to rescue those who deserve to leave Afghanistan. Many of the unlucky are Afghan women who write countless emails and WhatsApp messages to Western governments and organisations that tout how keen they are to help Afghan women. The answer, though, is often silence. Despair reigns among the forgotten.

Typical is the situation of Farzana (she asked me not to use her last name), who, like many Afghans, is in limbo. An employee of the large German NGO Welthungerhilfe (WHH), she reached out to me through her sister who knows me. Afraid for her life, Farzana said she had asked Welthungerhilfe for evacuation in mid-August and received no update for two weeks.

On September 1, I felt compelled to write an urgent message to the WHH human resources office on her behalf and received a reply one week later, on September 7, asking for a document that “proves [Farzana’s] employment” at WHH, as if they had no record of who was working for them in Afghanistan. Germany had announced on August 16 that it was evacuating 500 Afghan employees of “NGOs like Welthungerhilfe” but obviously WHH never got the message across to people like Farzana.

After my email request, WHH referred her to the German government for special visa approval, but without any instruction as to how she might reach the nearest German diplomatic mission that would stamp her passport. Despite the grand claim by German foreign minister Heiko Maas on August 30 that Uzbekistan will allow entry to Afghans bound for Germany, Farzana told me the German embassy in Qatar replied to her email on September 13 that Berlin is, in fact, still only “endeavouring to make arrangements with Afghanistan’s neighbouring countries”. She remains in Kabul, unable to decide what to do next.

This kind of slow bureaucratic hell without end is killing many Afghans who have had close connections to the West, not physically as the Taliban might, but slowly with anxiety from within. They live each day in agony as they struggle to accept the hard reality: that it might be better to make other plans than to keep on waiting for the promised help that never comes.

The official escape options for the remaining Afghans have been tragically flawed, bordering on the absurd. In mid-August, both the United Kingdom and Canada heralded resettlement schemes for Afghans to much fanfare. John, a British volunteer with our group, however, spent a day and a half trying to get through the UK government’s special hotline for Afghan refugees, only to reach a pre-recorded message that the phone number was not actually intended for Afghan refugees. One media report about the same hotline claimed that some callers were even redirected to a washing machine company.

As for Canada, a government source told us a week after the much-publicised announcement about taking in 20,000 “vulnerable Afghans” that the press release preceded actual planning so there were no clear details to be shared at all.

On August 17, India also made a big deal of offering a special “e-Emergency X-Misc Visa” to Afghans. That sounded lovely, except not a single Afghan I know has received it after applying. In fact, Indian outlet The Wire reported that the number of Afghans who have succeeded in getting this special visa was “none to negligible”.

The US also announced a special immigrant visa (SIV) or priority designations as refugees for Afghans, but it seems only those who have already escaped the country would benefit immediately. Even back in June 2020, an internal report of the US State Department estimated the average wait time for an SIV application from an Afghan as “480 days”. And the processing for one of these “priority designations” does not actually start until the applicant is outside Afghanistan.

Zahra (not her real name) was lucky to be in India with her husband on medical visit visas before Kabul fell and to be able to stay through the ongoing turmoil. She qualifies for a Priority 2 refugee designation from the US State Department but needs a referral from her US-based NGO employer, which so far has been stonewalling her request (they even told her outright to stop contacting them). She asked me not to name this employer for fear that they might punish her with an even longer delay if she goes public.

Not that it seems to make a difference if one keeps quiet: plenty of Afghan women contact me to say their email requests to Western employers for help are routinely being ignored.

The usual self-aggrandising mission statements in the international development sector about helping people build better lives or shaping a better world do not seem to apply with any urgency when it comes to the situation of local Afghan employees. One can hardly believe these organisations actually help anyone when they cannot even help their own workers.

The United Nations, whose mission is to respond on the ground to such crises, has not been that effective, either. Families we were in contact with who crossed into Pakistan’s Balochistan province in late August told us that they discovered the local UN Refugee Agency (UNHCR) office in Quetta closed for an unspecified reason. Quetta is the first major city on the route into Pakistan from the Spin Boldak-Chaman crossing and it makes little sense that this Afghan refugee hotspot has no functioning UNHCR office to do refugee registration, but several other Afghans also reported early in September that they could not access UNHCR’s Quetta office services.

A local contact told me that the UN likely caved in to “political pressure” from the Pakistani government, which is wary of too many Afghans arriving and which has already started deporting Afghans that it deems had entered the country “illegally”.

This, though, does not stop UNHCR or other UN branches for that matter from using the Afghan crisis for fundraising. “UNHCR is on the ground to provide lifesaving care and protection to families in need of help.” Maybe it does, but not so eagerly in Quetta, it seems. I ranted about the situation to a longtime UN employee friend, and she did not sound the least bit surprised. “That’s why I say, do not give money to the UN. It is worse than wasting it,” she sighed.

I am not arguing here that the West needs to save anyone and everyone who wants to leave Afghanistan, but only that it should do right by those who meet its own criteria for urgent help, not least educated women.

AUW, whose students and alumnae we have been attempting to help, is a recipient of a substantial amount of Western assistance.

Although 148 of its Afghan students and alumnae managed to leave Kabul on two of the last American evacuation flights, the university’s boastful assertion about the rescue makes no mention of the fact that some two dozen are still in Afghanistan and yet more are in surrounding countries. They all face a myriad of dangers for reasons ranging from having a woman’s rights activist as a mother to being without a stable legal status, and they do not want the world to forget them, even if the university seems to have done so already.

Among them, Somaya Ahmady was spending her dwindling funds on a hotel stay in Kabul before moving into a rented room at our suggestion to save on expenses. Her home is in the faraway city of Herat, and she told me a distant relative who joined the Taliban was forcing her to marry him so she ran away with her mother’s blessing.

“I worked hard to reach my goals through higher education. Now I have no hope to continue. The only plan is to find a way to run away from Afghanistan so I can [stay] alive,” she said.

AUW, whose chancellor is former UK prime minister Tony Blair’s wife Cherie Blair, gave them no formal update for almost a month and did not answer their emails, the group in Afghanistan told me. Finally, on September 24, the university held a Zoom meeting with them, only to say they should wait “a couple of months”, offering no exact timeline. That is to be expected. It is just another international institution that is failing to look out for all the Afghan women in its care.

The views expressed in this article are the author’s own and do not necessarily reflect Al Jazeera’s editorial stance.