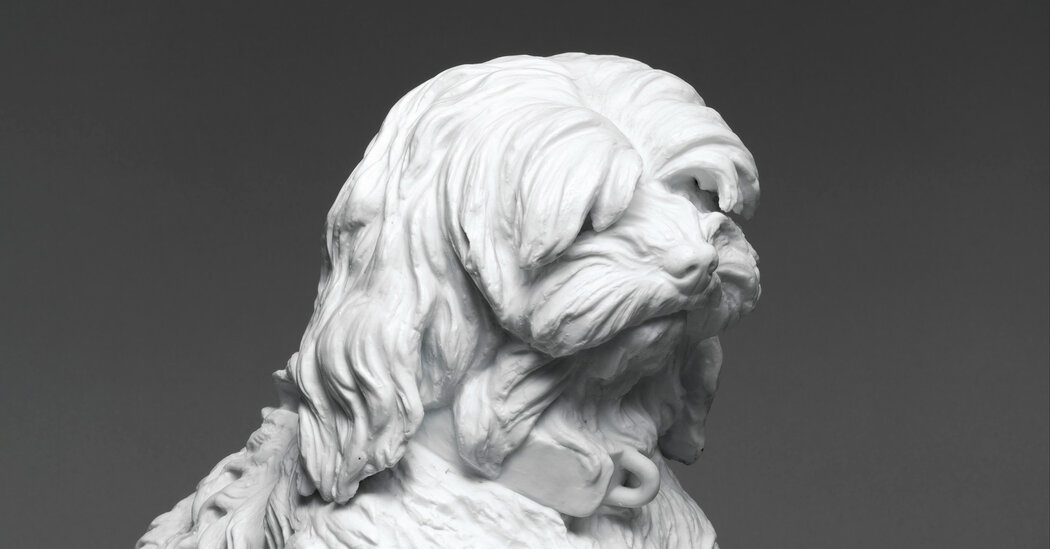 “The tiny Maltese,” the American Kennel Club tells us, “has been sitting in the lap of luxury since the Bible was a work in progress.”

This is also the opinion of my friend the Maltese owner (the dog is also my friend), who recently invoked the Greeks and the Romans as early admirers of the breed.

I have these conversations on occasion with people who are devoted to one breed or another and I usually nod and say, well, maybe, sort of. True, Aristotle did praise the proportions of a kind of lap dog described as a Melitaean dog. Scholars debate whether this meant the dog came from Malta, or another island called Melite or Miljet, or maybe a town in Sicily. It was a long time ago, after all. Aristotle also compared the dog to a marten, a member of the weasel family, perhaps because of its size. And yes, the Romans absolutely loved these dogs.

So there is little doubt that there were little white lap dogs 2,000 years ago. The question is whether the modern Maltese breed is directly descended from the pets Romans scratched behind the ears.

I have not mentioned this to the dog herself, who would prefer to remain anonymous because the internet can be vicious. And I doubt she would pay much attention to genealogical intrigue. Her interests, from what I can see, run more toward treats, arrogant and intolerable chipmunks and smelly places to roll around in.

It’s not just Maltese fanciers who are interested in their breed’s ancient roots. Basenjis, Pomeranians, Samoyeds, Salukis, terriers and others have supporters who want to trace the breeds back to ancient times. But the Maltese seemed a good dog to discuss because the historical record is so rich. Obviously the Maltese is an ancient breed. Right?

I brought this question to several of the scientists I turn to when I have dog DNA questions. Is the modern Maltese breed, in fact, ancient? The scientists, you will be shocked to learn, said no. But, as with anything involving dogs and science, it’s complicated.

A couple of points to set the stage. All dogs are descended from the first dogs, just as all humans can trace their ancestry to the first Homo sapiens. None of us, or our dogs, have a more ancient ancestry than any other. What people seem to want to know is whether those ancestors were mutts or nobles, William the Conqueror or one of the conquered, a dog on a lap who got into a portrait, or a dog on the street who got into trouble.

I’m not looking at this from the outside, by the way. I’ve been there myself, digging as deep as I could into the long and honorable history of my cairn terriers and Pomeranians. I’ve also tried to trace my family’s O’Connors and O’Leary’s and Fallons and Goritzes . (I haven’t found any conquerors yet.) But the idea of valuing genetic purity feels creepy sometimes, even if it is in animals who like to roll in cow pies when they get the chance.

“The Pharaoh hound people were the first to approach me and ask that question,” she recalled.

“Do our dogs really date back to the time of the Pharaoh?” the breeders asked. Unfortunately not. That breed, Dr. Ostrander said, was “totally recreated by mixing and matching existing breeds” after World War II.

Other breeds were established by picking an existing group of dogs in the Victorian era and classifying them as a breed with a definition that meant only dogs whose names were in a registry or whose ancestors could be identified as being in that registry, fit the breed. And 2,000 years ago, she said, “the concept of a breed did not exist.”

Nor does DNA show any direct line from ancient to modern Maltese. To understand what dog DNA research is all about, it’s worth taking a step back. The genetic markers that Dr. Ostrander and other researchers use in genome comparisons to identify breeds are mostly not the genes that contain the recipe for floppy ears or bent legs or a certain color coat.

They are not seeking a genetic recipe for a Bassett Hound or Beagle, but a way to see how closely related one is to the other. Most DNA in humans and dogs has no known function. Only a portion of a genome makes up actual genese. And repetitive stretches of DNA of unknown purpose, if any, have proven to be useful in comparing groups and individuals. They change more from generation to generation and so offer more variation for scientists to work with in comparing breeds. What researchers develop is a breed fingerprint, but not a blueprint.

Neither Dr. Ostrander nor Heidi Parker, a colleague and collaborator at N.I.H., gave a firm answer on how far back a breed could be traced, but they agreed that it basically depended on how long a breed club had been keeping records, not on what’s in a dog’s DNA. Before that time, breeding was not so regulated.

The genomes of the Maltese, the havanese, the bichon and the Bolognese (the dog not the sauce) are all related, Dr. Parker said. The breeds may have split from a common ancestor a few hundred years ago and that common ancestor may no longer exist, or it might have been closer to one of the breeds than the others. But there’s no DNA line to be traced to the time of Aristotle.

When I asked Greger Larson, of the University of Oxford, who studies ancient and modern DNA of dogs and other animals, whether any breeds date to antiquity, he looked, as best I could tell from his Zoom image, like I had asked him if the Earth might really be flat.

“Breeds have closed breeding lines,” he said. “That’s the idea. Once they get established, you’re not allowed to bring anything into it. And that concept of breeding toward an aesthetic and closing the breeding line — that whole thing is only mid-19th century U.K.”

“I don’t care whether you’re talking about a pug or a New Guinea singing dog or a basenji,” he said. Breeds, by definition, are recent.

There have, however, been lineages of dogs bred to the chase, or the lap, or to herd the sheep, for a long, long time. One such lineage, call it Maltese-adjacent, might be defined as “really small dogs with short legs and they require a lot of attention and people are in love with them,” Dr. Larson said. That lineage was certainly around in ancient Rome.

There are lots of others, but I doubt they would qualify for the Westminster Kennel Club Dog Show. And none of this means that the modern Maltese or any other modern breed is the same as the dogs of antiquity.

“We want to say that our dog is very old in its current form, that it hasn’t been changed,” Dr. Larson said. “Like the Maltese is the Maltese for the last 2,000 years. And that’s just clearly” not true. Although “not true” was not the expression he used.

“People have not been breeding dogs in the way that we do now for very long, at all,” he said. “What we lack in our vocabulary is a word for dogs that mostly look the same, doing the same kind of a job.”

But, setting words aside, I asked, what about the DNA. Does the DNA tell us how close a dog that looks like a Maltese now is to a Maltese then? He said that dog breeding in the past was never done to physical type, that dogs moved as people moved, from Rome to Britain, and back to Spain and Rome, and that nobody kept track of pedigrees. In addition, when breeds were established, they were based on a limited number of dogs admitted to the breed at that time. That is known in genetics as an extreme bottleneck. And all modern dogs are descended from just a few, unless there is interbreeding and mixing to change the look of the breed, which can happen.

You can now find out if your Maltese is really a Maltese by checking its pedigree or, if you want to dig into its genome, by sending some saliva (the dog’s) off to a company like Embark, with more than 100 employees chasing the secrets of dog DNA, or an academic venture like Darwin’s Dogs, part of the Darwin’s Ark project at the University of Massachusetts. (The ark, no judgment here, includes cats.) The scientists involved in this work also get pulled into the question of breed antiquity by curious dog owners and journalists.

Adam Boyko, the co-founder of Embark, and a geneticist at the Cornell University School of Veterinary Medicine, agreed that modern breeds, with their “closed populations” are about 200 years old.

He said there’s no question that little white lap dogs have a long history. “They were very popular in Roman times. They may or may not have come from Malta or some other Greek island.” But he said, it’s an open question what kind of genetic continuity there may be with modern little white lap dogs.

Even in human genealogy, where one can trace the human equivalent of a pedigree back 1,000 years, the idea of genetic continuity is divorced from the reality of genes.

Over the ages, each time a man and woman produce offspring, they take half the DNA from each parent. The genetic deck is shuffled and half the cards discarded. This shuffling occurs over and over. In each generation, it is as if two decks of 52 cards are shuffled to come up with a new deck that still numbers 52.

“When you go back 10 generations,” Dr. Boyko said, most of those ancestors, 10 generations back actually didn’t contribute any DNA to you. It got shuffled out.” It’s the same with a Maltese. Even if there were a documented direct line, which there is not, the descendants wouldn’t have much of the ancestors’ specific genetic variation.

In the end, of course, explained Elinor Karlsson, a genomics researcher at the University of Massachusetts Medical School who runs Darwin’s Ark, we cannot reach complete clarity on dog breeds because “breed” is used to mean different things by different people.

Speaking of dogs in art, she said: “It could be either that the dog in the painting simply looks like a Maltese and is entirely unrelated to the Maltese around today. It could be that that dog actually has exactly the same genetic variant that causes a Maltese to be small or causes a Maltese to be white.” But, she added, “I don’t know whether that makes them the same breed or not. That’s kind of a cultural concept.”

“So does that mean that your Maltese is ancient because there was an ancient Maltese that had that same mutation? I mean, it kind of depends on your perspective,” Dr. Karlsson said.