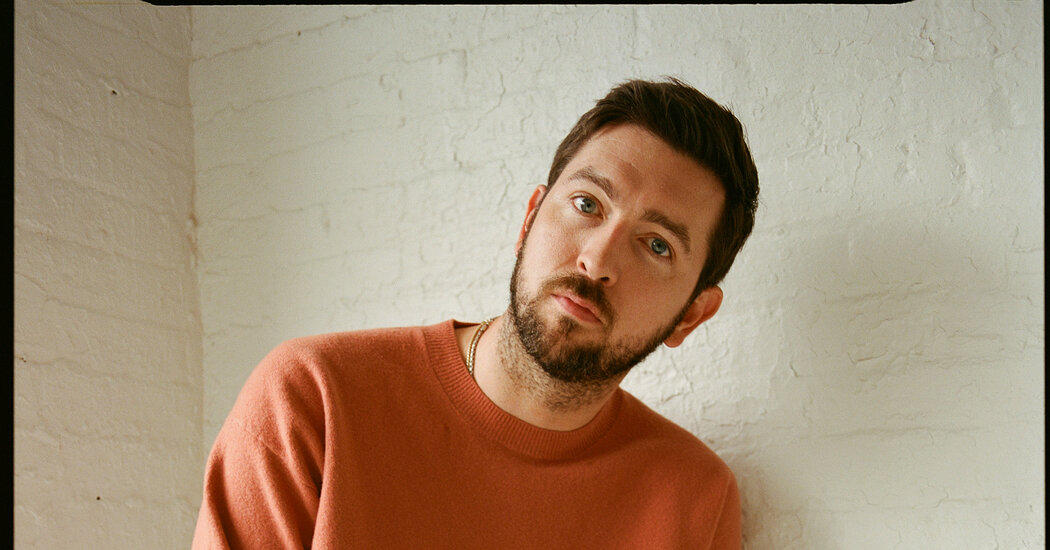 The big man had come to Little Island.

One Friday morning last month, Nicholas Braun ambled his six-foot, seven-inch self across a bridge over the Hudson River and into this man-made floating park that has fascinated him since it opened in the spring. Or as he put it, “I’ve seen this place a lot from the highway, but it doesn’t ever feel like the moment to go.”

He wandered its landscapes and worked his way up and down its topography. He spent a few moments admiring the hypnotic rotations of a giant spinning disc (“Oh, that made me dizzy in five seconds,” he said) and somewhat less time listening to a slightly repetitive band play in an amphitheater (“They could use a few more lyrics”). He eagerly explored a cavernous tunnel that turned out to lead to the restrooms.

All in all, he came away with a new perspective on the value of public space. “Feels like there should be a mini-golf course up here, right?” he said.

When you’re in Braun’s company, almost anything he says, in his unhurried and naturally innocuous delivery, can seem funny. It can feel like he just has a preternatural propensity for getting himself into awkwardly comic situations.

Those reactions might also be the result of an automatic tendency to associate this 33-year-old actor with his breakout role as Cousin Greg on HBO’s “Succession,” who could have ended up a hapless second-tier character if Braun hadn’t helped elevate him into a first-rank buffoon on that cutthroat comedy-drama. In just two seasons, Braun has slid seamlessly and un-self-consciously into Greg’s blundering fish-out-of-water rhythms, whether he is excusing the mispronunciation of his own name or stammering his way through a U.S. Senate hearing.

But the real-life Braun is by no means Cousin Greg. He is a guy with regular problems and plausible ambitions, who is vexed by leaky pipes in his apartment, hopes for a long-term romantic relationship and counts himself lucky, after more than 20 years as a working actor, to find himself with a popular part on a hit show.

He is also sympathetic to Greg’s highly entertaining flaws and optimistic that the character might someday transcend his limitations — perhaps at some point during the coming third season of “Succession,” which begins next Sunday.

“I think there is an intellect underneath it all, but it’s buried by all the other stuff — being afraid to talk in a room full of important people,” Braun said. “But when he does get a chance, I think he does have a good take to put forth.”

If there is a point where Braun syncs up completely with Greg, it is in telling the story of someone who suddenly and surprisingly finds himself exactly where he has always wanted to be, and is determined to make the most of the opportunity.

“There’s a trying to Greg that’s really endearing and fun for me to play,” Braun said. “A trying and usually failing — but occasionally not, and it keeps working, slowly working, for him.”

Braun had recently finished shooting the new “Succession” season in Tuscany, then spent the ensuing days traveling through Europe with a couple of acquaintances. (As Braun explained, “These two guys were road-tripping and I was like, can I join you in your small Yaris?”)

He relaxed at an old hotel in Genoa and gambled in Monte Carlo, where plastic barriers separated him from other revelers, to his mild disappointment. “I find that blackjack is best when you’re talking to each other and being self-deprecating about losing money together,” Braun said.

A certain amount of happenstance has played a vital role in his career. Braun grew up in New York and Connecticut, and he was five years old when his parents divorced. After his father started attending acting classes he’d been given as a gift, he encouraged the reluctant young Nicholas to follow him into the craft.

“I would see him every other weekend, and he would put me in a chair and we would do these Meisner repetition exercises together,” Braun said. “They were so frustrating. I hated them. A father and son in a repetition battle — it’s actually crazy to think of that.”

“Barack Obama only did two years there,” Braun said with a smile. “Worked for him.”

When a copy of the pilot script for “Succession” came his way a few years ago, Braun found himself slightly baffled by some of the intense repartee being flung by Logan Roy, the fictional media mogul played by Brian Cox, and his squabbling scions.

“There’s all these things about ‘boost the bid’ that I didn’t understand how that fit in,” Braun recalled. “Is this a business show?” But when he read one of his first scenes as the interloping, underqualified Gregory Hirsch, that had him wearing a dog costume at a theme park and throwing up through its eye holes, Braun said, “I understood my piece of it.”

The character was “the guy in the room that doesn’t get it, who wants to get it, and wants to be there,” he said. “It was pretty easy to get into Greg’s, you know, thought patterns.”

When Braun arrived to audition with the “Succession” creator Jesse Armstrong and Adam McKay, an executive producer who directed the pilot episode, he was an immediate standout.

“His height is just disarming, right away,” said McKay, the Academy Award-winning screenwriter and filmmaker. “I’m six-foot-five, so usually when I meet people that are taller than me, they’re athletes. To meet someone who was six-foot-seven and they have this kind of comedic neurosis to them was really unusual.”

After Braun read from script pages and riffed in a few improvised interactions, the “Succession” team was confident it had its Greg.

Armstrong said that the character was conceived as someone who would share the audience’s disorientation in the world of the Roys — a member of the family who nonetheless did not fit into it easily — but that in Braun’s portrayal he became something more.

Braun has feasted on scenes like Greg’s inarticulate Senate testimony, for which the actor was handed several pages of dialogue the night before filming. “Jesse was like, instead of coming back in a few weeks, would you be game for doing this tomorrow?” Braun recalled. “I was like, put me in — if I get even 80 percent of this scene, it’ll work.”

Macfadyen explained that Tom, who is married to Logan Roy’s daughter, Shiv (Sarah Snook), has even less of a claim to legitimacy than Greg, who is at least related to the family by blood. Therefore, Macfadyen said, “Tom is one of the few people who finds Greg very threatening.”

There is no obvious secret to his alchemy with Braun, Macfadyen said. “Sometimes we’ll think a lot and talk and have ideas,” he said. “And sometimes it’ll just come out on Take 1 and that’s the one they use.”

Braun said that of course some portion of his true self is present in Greg, though perhaps not as much as viewers might think. “I pick a bunch of traits that are me trying too hard or feeling uncomfortable in a room, or wanting to speak up but I don’t quite get permission, so it comes out in a weird way,” he said.

“Maybe I’m attracted to roles that feel therapeutic,” he continued. “I get to look at these parts of myself and ask, Why do I do that? How do I amplify that in a fun way?”

Referring to a scene where Greg prepares himself for a potential act of corporate espionage, Braun said playfully, “I haven’t been in a bathroom talking into a recorder, checking it because I’m going to go rat on somebody. I haven’t done that, but I could see myself doing it in the right situation.”

While there would seem to be a very sensible ceiling on just how far Greg can go on “Succession,” Armstrong did not entirely rule out the possibility that the character could someday find himself in Logan Roy’s seat.

“I wouldn’t want to destroy the fun of considering all the candidates,” he said. “Greg’s got a long way to go. He often gets what he wants, through a mixture of guile and guilelessness. I leave it up to other people to judge whether he’s a real succession candidate or not.”

In the meantime, Braun is still acclimating to the strange celebrity status that his character has afforded him. He can’t completely avoid the fan following that Greg has cultivated, but he tries not to let the adulation and the memes infiltrate his performance.

“You don’t want to think, is this a meme-able moment?” he said.

He has been stretching his legs in other projects, like the comic caper “Zola,” which cast him as the hopelessly devoted boyfriend of an impulsive stripper played by Riley Keough, and he grew a beard to play the older male suitor in a coming film adaptation of Kristen Roupenian’s short story “Cat Person.” (“I didn’t even know I could,” he said of his new facial hair. “I was like, ‘I can do this.’”)

Braun said he has been working on his own writing as well, including a “quite personal” project that he described as a “relationship traumedy.” If he seems “fascinated by romance and courting another human,” he said it’s because “I haven’t really been in a long-term relationship, ever.”

“I do yearn for it and yet I’m incapable of it,” he said. “I go toward it and then I hit a wall where I’m like, I can’t go farther into this. I’ve got to exit.”

Before you start feeling too bad for the tall, single star of a popular TV series, Braun said, more buoyantly, “I do believe it’ll happen at the right time with the right person. Until then, it’s fun to meet people and see what works.”

Looking at his own family history, Braun said it was too soon for him to throw in the towel. “My dad had me at 48,” he said. He added that they reached a better understanding of each other when they could finally have an adult conversation together. “That was only in the last year, just about eight months ago,” he said.

Perhaps reacting to the quizzical expression on his interviewer’s face, Braun quickly amended his answer. “No, no, no, no, I’m just kidding,” he said.

Life had once again demonstrated that, under the right circumstances and with the right inflection, he could get anyone to buy into anything he said. “I’m in a good deadpan zone,” he said.

Election Commission lets off Himanta Biswa Sarma with a warning