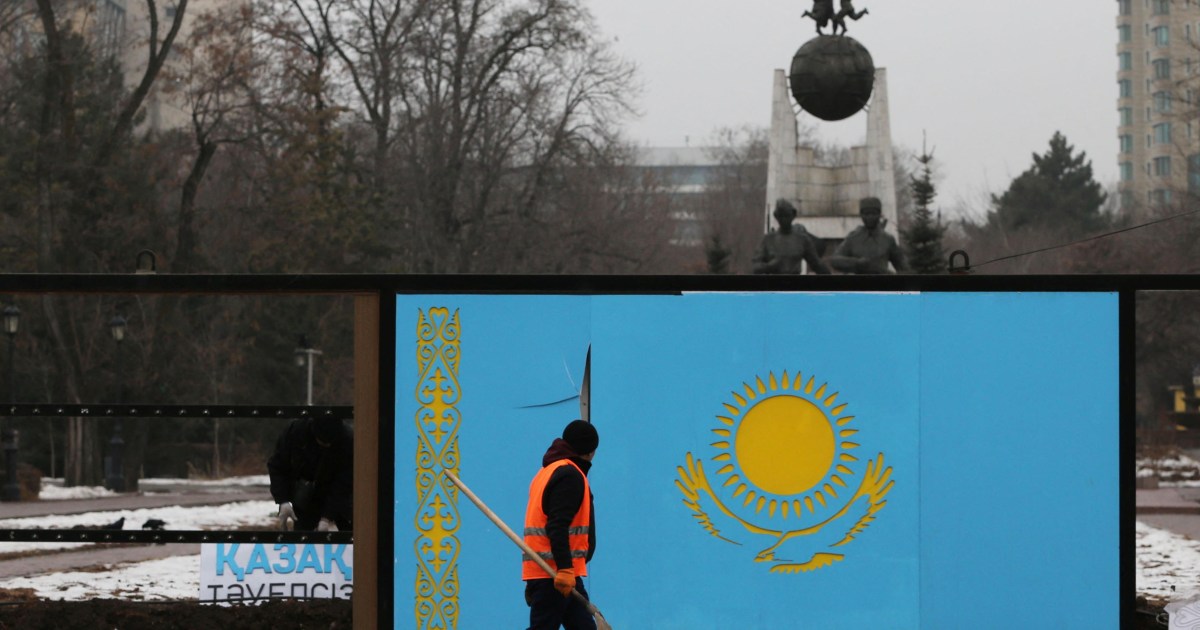 Last week, Nurlan left his apartment in Almaty, Kazakhstan’s largest city and former capital that became the focal point of violent protests, only twice, to quickly buy groceries and scurry back.

The 41-year-old accountant, who mostly worked from home because of the COVID-19 pandemic, did not even consider going downtown, where hundreds of armed men looted shops, seized and burned government buildings, and clashed with police.

“I could have had the crap kicked out of me – in the best case. Or they could have tortured me to death,” Nurlan, who withheld his name because he fears persecution for saying “wrong things” about the protests, told Al Jazeera.

He spent most of last week in an information vacuum after authorities shut down web access and mobile phone communication.

Meanwhile, his parents, who live in another city, endlessly dialled his number, “going crazy” about the uncertainty in Almaty and in the rest of the vast, oil-rich Central Asian nation of 19 million.

Although Nurlan grew up after Kazakhstan’s independence from the Soviet Union, his mother tongue is Russian, he watches Russian and Western movies, and he felt a cultural gap between himself and the protesters, who were mostly rural, unemployed, Kazakh-speaking youngsters.

But he believed that it was not the protesters who resorted to violence.

Rallies began on January 2 in a southwestern oil town and spread to the rest of Kazakhstan’s urban centres.

The disorganised demonstrators had no apparent leaders or agenda and simply demanded higher salaries and the dissolution of President Kassym-Jomart Tokayev’s government.

On January 5, however, thousands of armed “mercenaries” arrived in Almaty to seize police stations, administrative buildings and the airport, Nurlan said, echoing the official viewpoint.

Some were from neighbouring Kyrgyzstan and Uzbekistan, he said – also repeating Tokayev’s words about “foreign militants” and “terrorists.”

Only nominally Muslim and indifferent to any religion, Nurlan claimed that the “mercenaries” were “bearded radicals” allegedly hired by Kayrat Satybaldy, a nephew of Kazakhstan’s first President Nursultan Nazarbayev.

A powerful businessman and former security chief, Satybaldy is known as a champion of an austere version of Islam.

Nazarbayev stepped down in 2019, but retained enormous power as head of the powerful Security Council, while his family and proteges controlled Kazakhstan’s security agencies and key businesses.

Two days after the protests started, Tokayev sacked Nazarbayev from the Security Council, dissolved the government and dismissed several key security chiefs appointed by the first president known officially as El Basy, “head of the nation.”

Tokayev never accused the president’s nephew – whose brother still serves as deputy head of the KNB, or the National Security Committee – of masterminding the violence.

Tokayev has prefered not to name the persons or powers that were behind the “aggressors.”

“We faced [an] unprecedented act of aggression and assault on our statehood, and took urgent measures to restore constitutional order and the rule of law,” Tokayev tweeted on Monday.

Nurlan is enthusiastic about the peacekeepers’ arrival – even though Kazakhstan may become more dependent politically on its former imperial master.

“Russians are better than this crap. We’d better pay the price to the Russians than live under the bearded ones,” Nurlan said.

‘Questions will continue to be asked’

The gaps in Tokayev’s version of the events, his hints at the role of independent journalists and human rights activists, his government’s reluctance to publish the names of dozens of killed protesters, and the speed of arrests – more than 9,000 have been detained so far – worry international observers.

“At this point, we would encourage Tokayev to make use of this moment to speak the truth about what happened over the past week,” Ivar Dale, a senior policy adviser with the Norwegian Helsinki Committee, a rights watchdog, told Al Jazeera.

“Questions will continue to be asked about the official version of events, which at this point does not seem entirely credible and lewd to unnecessary speculations. An independent, international inquiry into the events may become necessary,” he added.

Many Kazakhs are cautious about naming the perpetrators – and instead, simply praise the return to normalcy.

“The city is alive, the public transportation is moving, things are quiet, foodstuffs are being delivered to shops,” Alexander, an ethnic Russian graphic designer born and bred in Almaty, told Al Jazeera.

But to many in western Kazakhstan, where the protests began, the reason is crystal clear – an economic stagnation brought on by corruption, soaring inflation and a lack of opportunities for younger Kazakhs.

“The government’s greed and insolence became limitless. People really have nothing to eat, no jobs,” a native of Atyrau, a Caspian port and major hub of oil production and export, told Al Jazeera.

The town of Zhanaozen, where the protests erupted, had already seen similar unrest.

In 2011, government troops shot at a crowd of disgruntled oil workers who had been on a strike for months, killing at least 14 and wounding hundreds.

Also in Zhanaozen, up to 200 were killed in 1989 ethnic clashes that signalled the demise of the Soviet Union.