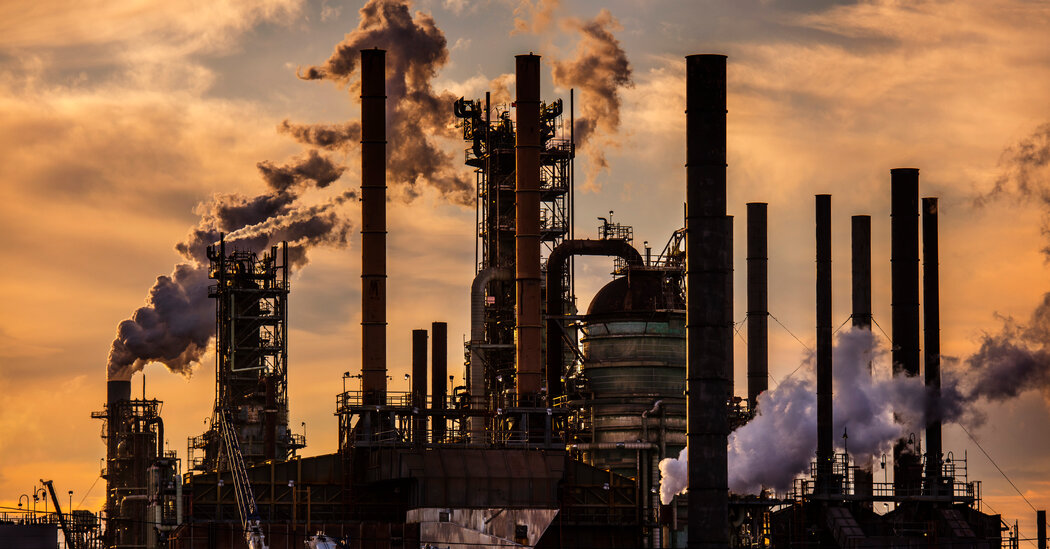 The ads appear on Facebook millions of times a week. They take aim at vulnerable Democrats in Congress by name, warning that the $3.5 trillion budget bill — one of the Biden administration’s biggest efforts to pass meaningful climate policy — will wreck the United States economy.

The paid posts are part of a broad attack by the oil and gas industry against the budget bill, whose fate now hangs in the balance. Among the climate provisions that are likely to be left out of the plan is an effort to dismantle billions of dollars in fossil-fuel tax breaks — provisions that experts say incentivize the burning of fossil fuels responsible for catastrophic climate change.

On Thursday, details emerged of an agreement between Senator Chuck Schumer of New York, the majority leader, and Senator Joe Manchin III of West Virginia, a Democrat with huge sway in the divided Senate who has said he doesn’t support such an expansive bill. According to a memo outlining the agreement, first obtained by Politico, Mr. Manchin said that if the legislation were to include extensions of smaller tax credits for wind and solar power, it shouldn’t undo tax breaks for fossil fuel producers.

The American Petroleum Institute, the oil and gas industry’s biggest trade group, has been central to efforts to push for continued tax breaks for oil and gas. It is using a front group, called Energy Citizens, that API also used a decade ago to successfully thwart a “cap and trade” plan that would have set a ceiling on emissions of planet-warming greenhouse gases, while letting companies buy and sell special permits to stay under that ceiling.

In the first six months of this year, API spent more than $2 million directly lobbying Congress on issues including taxes, according to federal disclosures. API, whose members include Exxon Mobil, Chevron and BP, has also run a seven-figure TV campaign opposing various measures in the reconciliation package.

And on Facebook, API has spent almost half a million dollars to run hundreds of ads attacking the bill since Aug. 11, when the Senate passed a budget resolution, according to advertising data analyzed by InfluenceMap, a London-based think tank that tracks corporate influence on policymaking. Those ads, which include at least 286 that targeted individual members of Congress, have been viewed at least 21 million times.

API’s average daily spending on Facebook ads attacking the budget has surpassed the group’s previous peak spending, set after then presidential candidate Joe Biden announced his climate plans in July 2020, the data show. (Detailed Facebook data on political ad spending is available only since May 2018.)

API ads laud Sen. Manchin, meanwhile, for his opposition to the plan. Sen. Manchin has received more campaign donations from the oil, coal and gas industries than any other senator. “Help us thank Senator Joe Manchin,” reads one recent ad, “for being a champion of American made energy.”

Megan Bloomgren, an API spokeswoman, said the industry group was working with policymakers on both sides of the aisle on climate policy, and that it continued to support carbon pricing. “Policies embedded in the $3.5 trillion reconciliation package that limit American energy access and impose punitive taxes are the wrong way to address our shared goal for emissions reductions and would only lead to more imports and higher costs for Americans,” she said.

Exxon Mobil, the largest oil and gas producer in the United States, has spent about $1.6 million on political and issue ads over that same time period, the data show. That is the company’s highest daily spend on Facebook ads since the presidential election.

While many of the ads speak generally about the oil industry, others urge voters to call their representatives: “Tell Congress that American businesses can’t afford a tax increase,” one recent Exxon ad reads.

Casey Norton, an Exxon spokesman, said the company’s efforts were “fully transparent and reported to the appropriate agencies.” He said the company’s efforts were “related to a tax burden that could disadvantage U.S. businesses, and we have made that position known publicly.” Exxon continues to support climate action, including regulating methane, a particularly potent greenhouse gas, as well as a price on carbon, and backs the climate goals of the Paris agreement, he said.

Jake Carbone, a senior analyst at InfluenceMap, said the ads had enormous reach and potential impact.

“They’re getting millions of views,” he said. “Even if just a tiny percentage of the people who view those ads actually end up contacting the representative, that’s still going to be a lot of calls.”

Environmental groups are countering with their own spending on ads. League of Conservation Voters and Climate Power, for example, said they spent $3.2 million on digital ads since August, including ads against Republicans in Congress, like Maria Salazar of Florida, who voted against the bill.

“Florida families need Maria Salazar to see what’s in front of her,” says an ad that started running on Sept. 8. “The danger is real. Extreme weather is more intense and more frequent than ever before — and all the more reason to act now.”

“It’s time to tune out API’s self-serving campaigns against climate action and focus on getting the Build Back Better Act over the finish line before our window to act closes,” said Lori Lodes, executive director of Climate Power.

Researchers studying oil and gas influence campaigns said the industry campaigns are the latest chapter in a long history of blocking climate policy.

API was one of the first industry bodies to have extensive early knowledge about climate change, said Benjamin Franta, a Stanford researcher and co-founder of the Climate Social Science Network, a global network of scholars studying climate politics. “It was one of the earliest in the industry to downplay the threat of climate change and promote more fossil fuel expansion,” he said.

The industry lobby group in recent months said that it supports strong action on climate, including putting a price on carbon pollution. Both API and Exxon are the target of an investigation by the House Committee on Oversight and Reform on their past efforts to block climate policy. API has said it “welcomes the opportunity to testify.”

Much of the industry’s effort has focused on protecting special tax breaks that benefit producers. But experts say the subsidies are unnecessary for a profitable and mature industry like oil.

Furthermore, the burning of fossil fuels has driven climate change, a link highlighted in a landmark scientific report released by the United Nations this year. In a separate report, the International Energy Agency said that nations around the world need to immediately stop approving new oil and gas fields if they want to avert the most catastrophic effects of climate change.

“Subsidies can make the difference between a field going ahead or not,” said Pete Erickson, Climate Policy Program director at the Stockholm Environment Institute.

President Biden had made tax overhauls a critical component of his climate agenda, along with a $150 billion program designed to replace most of the nation’s coal- and gas-burning power plants with wind, solar and nuclear power over the next decade. In his American Jobs Plan, President Biden called for eliminating “billions of dollars in subsidies, loopholes, and special foreign tax credits for the fossil fuel industry.” Clean energy can provide more sustainable jobs, President Biden argues.

Both environmental groups and climate researchers have called for an end to fossil fuel subsidies that amount to $350 billion in the world’s richest countries, more than double estimates of subsidies for renewable energy.

Industry groups like API and the U.S. Chamber of Commerce have defended the tax provisions. They “allow our industry to recover its costs and invest that into the next project,” a group of oil-industry groups wrote in a letter to Ron Wyden, a Democrat from Oregon and chair of the powerful Senate Committee on Finance, in June.

Likely gone are repeals including tax deductions for “intangible drilling costs,” which allows producers to deduct the bulk of the cost of drilling new wells, as well as a tax credit for an unconventional process called enhanced oil recovery. That credit encourages producers to drill for oil using methods that might not be economical with oil market prices, a Congressional review said last year.

Also missing are repeals of a provision known as a “percentage depletion allowance,” that allows independent oil and gas producers and royalty holders to deduct 15 percent of gross revenue, year after year; that enables smaller operators to keep even uneconomical, marginal wells up and running. The Biden administration has calculated that getting rid of these and other fossil fuel tax preferences would generate some $35 billion over the next decade.

Gretas stand up all across G20 nations