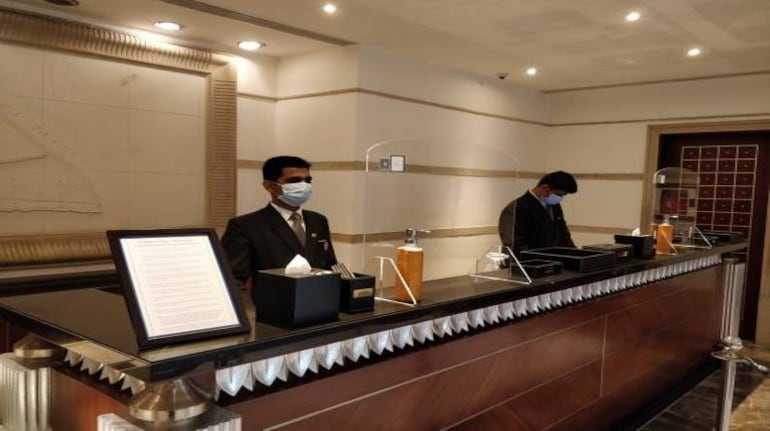 Representative image of hotel lobby. Travel and hospitality accounts for the third largest chunk of services exports after IT and Business services.

India’s dominant services industry returned to growth in August, expanding at its fastest pace since the pandemic began, as businesses reopened amid improved vaccination rates, a survey showed on Friday, although firms continued to cut jobs.

Despite the impact of the second wave of the COVID-19 pandemic, India’s economic growth reached a record 20.1% in the June quarter but analysts have said vaccination coverage remains crucial to sustaining the recovery.

The IHS Markit Services Purchasing Managers’ Index rose to 56.7 in August – its strongest pace since the pandemic hit the country in March 2020 and well above the 50-level that separates growth from contraction.

”Service providers foresee a brighter outlook, with firms indicating that the economic recovery could be sustained if restrictions continue to be lifted and further waves of contamination can be avoided.”

Overall new orders climbed at the fastest rate since January 2013, as optimism reached its highest level in five months. New export orders, however, continued to decline.

But employment remained in contractionary territory for the ninth month in a row, underscoring weakness in the labour market.

Persistent supply chain disruptions caused by the pandemic meant input costs rose at their quickest rate since April and firms were unable to pass on some of the surge to customers. Prices charged rose at the slowest pace in four months.

”Another worrying aspect was the evidence that inflationary pressures continued to mount. Input costs increased at the fastest rate in four months, one that outpaced its long-term average,” added De Lima.

Although the survey indicated inflation could stay beyond the Reserve Bank of India’s medium-term target of 4% for some time, analysts believe the likelihood of the central bank tightening policy in the coming months remains low as it focuses more on economic growth.

The overall composite index rose to 55.4 last month from July’s 49.2, well above the 50-mark for the first time in four months, as strong growth in services activity offset a softer rebound in manufacturing.