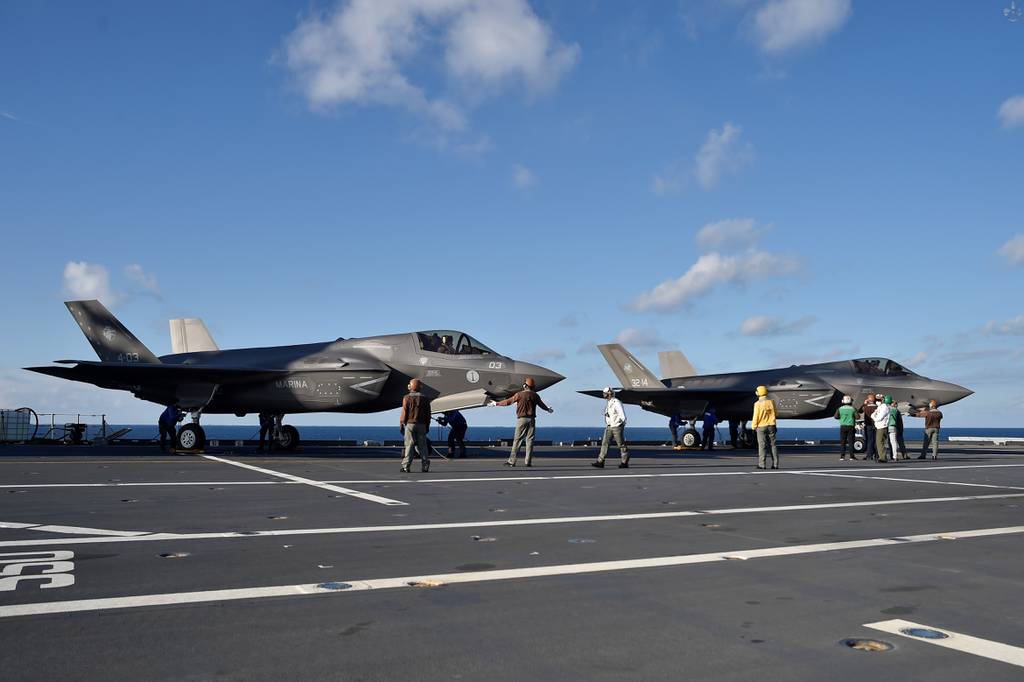 ROME – An Italian Air Force F-35B has landed for the first time on the Cavour, the Italian Navy’s aircraft carrier, joining a Navy F-35B on board and signaling the long awaited start of joint activities between the two forces using the aircraft.

During the exercise on Nov. 21 the two jets flew together from the Cavour to land on the nearby Queen Elizabeth – the Royal Navy carrier currently in the Mediterranean, while two U.S. Marine F-35Bs currently based on the British vessel flew to the Cavour, before U.S., Italian and British B’s flew maneuvers together.

The exercise was officially about F-35Bs from different countries working together, but the big breakthrough was the sight of Italian Navy and Air Force jets flying alongside each other after a slow start to cooperation between the forces.

The Navy now has three of 15 F-35Bs due to be delivered, two of which are training in the United States, while a third was delivered to the Cavour in July.

The Air Force is taking delivery of 60 F-35As, but has also received the first of 15 expected B’s it plans to deploy in missions requiring jets able to fly from short runways.

On Sunday, talk of genuine cooperation came thick and fast as Italian chief of staff Adm. Cavo Dragone suggested that in addition to Air Force pilots now flying their jets off the Cavour, Navy pilots would train to join land-based missions.

“The synergies between the Navy and Air Force in the use of the F-35B from the decks of aircraft carriers will be matched in their use from land, operating together in operational situations without runways suitable for conventional aircraft,” he said.

Describing Sunday as a “historic day”, he added, “This a new season in which we head towards complete integration of the F-35Bs of the Air Force and the Navy which will bring total interoperability in air and naval operations.”

In a statement, the Air Force said, “With this activity we are turning a new page where interoperability and the concept of Joint and Combined synergy between armed forces are concrete facts.”

That adds to talk in this year’s Italian defense budget of a ‘STOVL Joint Force,’ suggesting some sort of integrated Italian F-35B force could evolve.

What remains to be decided is where one shared base for the jets could be established, with the Navy hitherto keen to continue to use its base in Grottaglie in southern Italy it has used for its aging Harrier fleet.

The Air Force, in turn, already has a large F-35 base for its A’s and its B at nearby Amendola and believes it makes sense to group all of Italy’s F-35 jets there.

How China Is Challenging US Central Command, Digitally