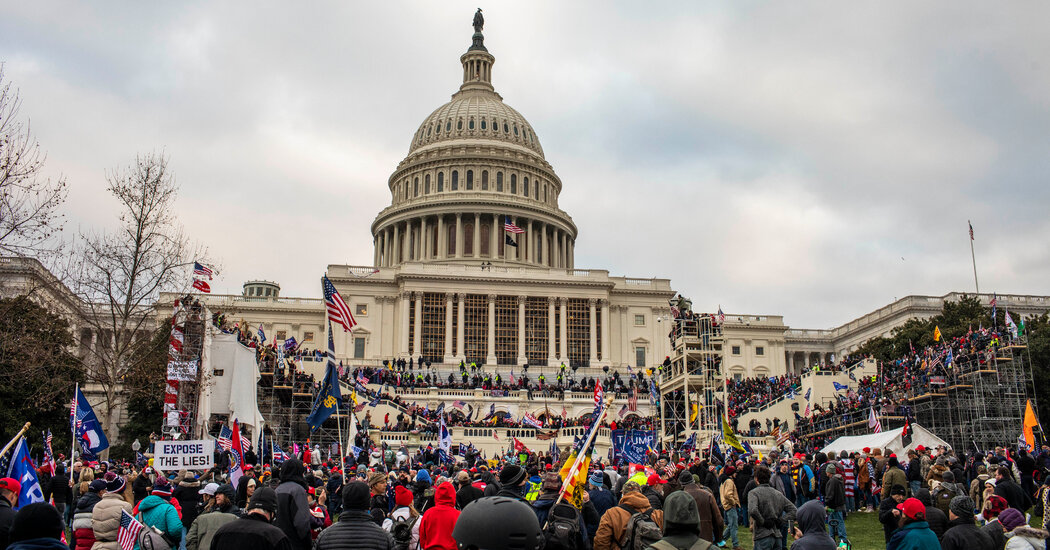 WASHINGTON — The anniversary of the Jan. 6 riot arrives this week with the congressional committee investigating the attack confronting a series of difficult questions, including how forcefully to flex its subpoena power and whether the Supreme Court will stymie a major element of its inquiry.

As the nine-member panel continues to examine the events leading up to the worst attack on Congress in centuries, it is waiting to see whether the Supreme Court will refuse a request from former President Donald J. Trump to block the committee’s access to White House records related to the riot. The committee also has not ruled out moving to subpoena members of Congress, or Mr. Trump and former Vice President Mike Pence.

Thursday will mark a year since a mob of Trump supporters stormed the building, determined to disrupt the formal certification of President Biden’s electoral victory. At least seven people died in connection with the riot, dozens more were injured and hundreds of workers in the Capitol were shaken and traumatized, further fracturing an increasingly partisan Congress.

The committee, aiming to release a final report before the November midterm elections, is planning for a more public stage of its investigation in the coming weeks as lawmakers work to trace the planning of the attack and expand the scope of the investigation. Representative Adam B. Schiff, Democrat of California and a member of the panel, said on Sunday on CBS’s “Face the Nation” that public hearings could begin “in a matter of weeks, if not a couple of months from now.”

But as the inquiry continues, the first anniversary will draw even more attention as lawmakers, staff members, Capitol employees and journalists commemorate the day. Both Mr. Biden and Vice President Kamala Harris are scheduled to give speeches marking the anniversary.

While the House is not scheduled to return for legislative work until Jan. 10, Speaker Nancy Pelosi of California has mapped out events for lawmakers to participate in on Thursday, either in Washington or virtually from their districts, in what she described as “an observance of reflection, remembrance and recommitment.”

The House will hold a moment of silence before Dr. Carla Hayden, the librarian of Congress, moderates a discussion with historians “to establish and preserve the narrative of Jan. 6,” Ms. Pelosi wrote in a letter to her caucus. Lawmakers will give speeches reflecting on the day, and lawmakers will hold an early evening prayer vigil on the center steps of the Capitol.

Unlike the House, the Senate is scheduled to be in session this week as Democrats continue confirming Biden administration nominees and seek to revive their party’s stalled legislative agenda. Senator Chuck Schumer of New York, the majority leader, is expected to invoke the riot and efforts by Trump loyalists to overturn the 2020 election as he pushes to pass a voting rights overhaul and try to change Senate rules to overcome a Republican filibuster against that legislation.

The Senate Rules Committee will hold an oversight hearing with J. Thomas Manger, the Capitol Police chief, on Wednesday. On Thursday, however, it is likely that some senators may be in Atlanta to attend an afternoon memorial service for former Senator Johnny Isakson, a Georgia Republican who died in December.

Some lawmakers have questioned whether it was appropriate for Congress to be in session, given the lingering trauma from the day.

“It was a sad day in our nation’s history, and a terrible day, and I don’t think bringing a lot of attention to the day is a great idea,” said Senator Susan Collins of Maine, one of seven Republicans who voted to convict Mr. Trump after he was impeached for his role in inciting the mob that day. “For some of the staffers,” she added, “for some of the Capitol Police officers, it brings back a lot of trauma, and I just think it’d be better if we aren’t here.”

A majority of Republicans, however, have sought to downplay the attack. They have largely refused to acknowledge their party’s complicity in failing to quash Mr. Trump’s lies about the election and cut ties with the former president, who continues to peddle conspiracy theories rather than accept his electoral loss.

“Our party has to choose,” Representative Liz Cheney of Wyoming, the vice chairwoman of the Jan. 6 committee and one of two Republican panel members, said Sunday on “Face the Nation.” “We can either be loyal to Donald Trump or we can be loyal to the Constitution, but we cannot be both. And right now there are far too many Republicans who are trying to enable the former president.”

Representative Kevin McCarthy of California, the minority leader, emphasized his party’s opposition to the riot in a letter to House Republicans, although he did not mention the former President.

“As we have said from the start, the actions of that day were lawless and as wrong as wrong can be,” he wrote. “Our Capitol should never be compromised and those who broke the law deserve to face legal repercussions and full accountability.” But he rebuked Democrats, accusing them of “using it as a partisan political weapon to further divide our country.”

In a series of separate televised appearances on Sunday, Ms. Cheney and Representative Bennie Thompson, Democrat of Mississippi and the committee’s chairman, pointedly did not rule out making criminal referrals to the Justice Department.

Key Figures in the Jan. 6 Inquiry

Mark Meadows. Mr. Trump’s chief of staff, who initially provided the panel with a trove of documents that showed the extent of his role in the efforts to overturn the election, is now refusing to cooperate. The House voted to recommend holding Mr. Meadows in criminal contempt of Congress.

Fox News anchors. ​​Laura Ingraham, Sean Hannity and Brian Kilmeade texted Mr. Meadows during the Jan. 6 riot urging him to persuade Mr. Trump to make an effort to stop it. The texts were part of the material that Mr. Meadows had turned over to the panel.

John Eastman. The lawyer has been the subject of intense scrutiny since writing a memo that laid out how Mr. Trump could stay in power. Mr. Eastman was present at a meeting of Trump allies at the Willard Hotel that has become a prime focus of the panel.

“If we find something that is irregular or illegal, we’re obligated to report it,” Mr. Thompson said. Appearing on ABC’s “This Week,” he said that while the committee had already asked two sitting Republicans, Representatives Scott Perry of Pennsylvania and Jim Jordan of Ohio, for testimony, more interview requests were possible.

“What people saw on Jan. 6 with their own eyes was not just something created at one moment,” Mr. Thompson said. “It was clearly, what we believe, based on the information we have been able to gather, a coordinated activity on the part of a lot of people.”

Ms. Cheney, appearing later on the same show, said the committee had received firsthand testimony that Mr. Trump was watching the attack unfold in the dining room next to the Oval Office as members of his staff pleaded for him to go on television and call for his supporters to leave. According to the testimony, Ivanka Trump, the president’s daughter and adviser, went into the room twice to ask her father to intervene, Ms. Cheney said.

“I think that there are a number of — as the chairman said — potential criminal statutes at issue here, but I think that there’s absolutely no question that it was a dereliction of duty,” Ms. Cheney said. “And I think one of the things the committee needs to look at, as we’re looking at a legislative purpose, is whether we need enhanced penalties for that kind of dereliction of duty.”

The committee has obtained more than 35,000 documents so far, including a trove released on New Year’s Eve by Bernard Kerik, the former New York City police commissioner who was involved in Rudolph W. Giuliani’s effort to investigate claims of voter fraud. Among the documents Mr. Kerik turned over to the committee is a 22-page “Strategic Communications Plan” to overturn Mr. Biden’s victory and install Mr. Trump for a second term.

“We Have 10 Days To Execute This Plan & Certify President Trump!” the document stated. “GOAL: Nationwide communications outreach campaign to educate the public on the fraud numbers, and inspire citizens to call upon legislators and Members of Congress to disregard the fraudulent vote count and certify the duly-elected President Trump.”

Mr. Kerik said he had withheld from the committee a Dec. 17, 2020, document called “Draft Letter From POTUS to Seize Evidence in the Interest of National Security for the 2020 Elections.” The document was created around the time some of Mr. Trump’s advisers, including the former national security adviser Michael T. Flynn, were discussing seizing voting machines and invoking national security emergency powers after the election.