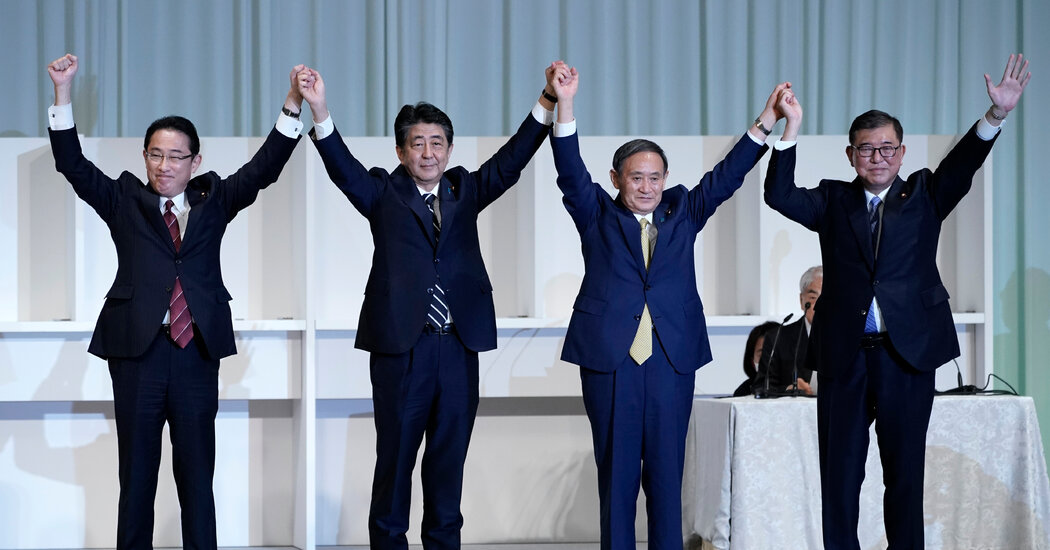 TOKYO — When Prime Minister Yoshihide Suga announced on Friday that he would not seek re-election as head of Japan’s governing party, the decision created an unexpected opening to replace him.

The winner of a party leadership contest later this month will be a shoo-in to become the next prime minister. But it’s a job that may have few takers.

Mr. Suga leaves the Liberal Democratic Party facing its biggest crisis in over a decade. Japan’s vaccine rollout started slowly. Coronavirus case counts are at their highest levels of the pandemic. The economic recovery has been tepid. And the government has failed to articulate a clear path forward.

The public is angry “about the way that Covid-19 and its economic effects have been handled,” said Michael Cucek, an assistant professor of Asian studies at Temple University’s Japan campus.

There’s little chance that the L.D.P. will lose power, but it is almost certain to see its majority diminished, he said. That means that, as the party decides who will replace Mr. Suga, the priority is finding someone who can “stanch the bleeding.”

With rank-and-file party members afraid for their prospects in the lower house elections that are likely to be held next month, many will want to “take this opportunity to change the image of the L.D.P.,” said Jiro Yamaguchi, a professor of political science at Hosei University in Tokyo.

Standing in the way of that desire, however, are the entrenched interests of the party’s elite, who will be reluctant to hand power to a new generation, he said.

The outcome of the party election is likely to hinge, as always, on the results of horse trading and back-room deals among the various internal factions led by those insiders. Here are some of the candidates they are likely to consider.

So far, only one person has officially announced an intention to run: Fumio Kishida, a former foreign minister. During a news conference on Tuesday outlining his platform, he sought to draw a bright line with Mr. Suga, pledging a more transparent and accountable style of government that would get the coronavirus firmly under control by early next year.

Mr. Kishida, 64, is a party insider, educated at the elite Waseda University, for whom politics is a family business: He got his start working in the office of his father, who represented the city of Hiroshima.

Over his years in politics, Mr. Kishida has held a wide range of cabinet positions and important roles in the L.D.P., but he is best known as the long-serving foreign minister under Shinzo Abe, Mr. Suga’s predecessor. He also briefly served as defense minister.

Last year, when Mr. Abe stepped down, Mr. Kishida was his favored successor. But rival factions within the L.D.P. opposed the pick, and Mr. Suga emerged as a compromise candidate.

Although Mr. Kishida seems the most likely choice of the old guard, Mr. Abe and other party grandees have not yet indicated whom they will support.

Mr. Kishida is unpopular among backbench lawmakers. “If the rank-and-file members are obedient to these bosses, then Mr. Kishida will get enough votes to replace Mr. Suga,” Mr. Yamaguchi, the political science professor, said. But if those members insist that the party needs a makeover, Mr. Abe and others will have to look elsewhere.

If the L.D.P. is looking for a new face, it might turn to Sanae Takaichi, a conservative who is a darling of the Japanese right wing.

A former minister of internal affairs and telecommunications, Ms. Takaichi, 60, said on Friday that she would be interested in running for the top job, taking the opportunity to draw a contrast with Mr. Suga by dressing him down for what she called his indecisive leadership.

“She’s very conservative, and she tries to present herself as the idol of the right wing or conservative camp in the L.D.P., the true believers,” Mr. Yamaguchi said, adding that many in the party would be happy to line up behind her.

That said, Ms. Takaichi has no faction of her own, so she would need to clear the hurdle of getting 20 L.D.P. lawmakers to endorse her before she could run. The party, which has governed Japan for most of the postwar era, has never had a female leader.

“The Japanese public wants to see a female prime minister, but in the inside-party struggle, she has no base,” said Lully Miura, a political scientist and head of the Yamaneko Research Institute in Tokyo.

If Ms. Takaichi enters the race, Ms. Miura said, “she’s running in this election to become the top female candidate in the future,” hoping that the profile boost would give her an edge in the next leadership race.

Mr. Ishiba, 64, is a former defense minister popular among the public but disliked by L.D.P. lawmakers for his abrasive, populist style.

He twice ran against Mr. Abe, nearly beating him in the 2012 election, and was one of the leading contenders for Mr. Suga’s job during last year’s contest.

Mr. Ishiba has said he will take another shot at seizing the reins of the party, but it is not clear who would support him. Mr. Abe reportedly still holds a grudge against him, and the other faction leaders actively worked to foil him last year.

“He’s a borderline case in terms of a candidate. He can probably get the 20 signatures, but he’s not particularly well liked by the Diet members,” said Mr. Cucek of Temple University, referring to the Japanese Parliament.

Mr. Kono, 58, is a popular, charismatic figure with the right policy experience to be the next prime minister. But his current position as the minister in charge of the vaccine rollout could make it tough for him to win.

That’s partly because it will be hard for him to avoid responsibility for Japan’s missteps and partly because many will argue that he should be devoting his time and energy to combating the current crisis, not politicking.

But if Mr. Kono jumps in — he said on Friday that he was consulting with colleagues about the possibility — he could shake up the election. With a widely followed Twitter account and an easy, relatable style that contrasts with the traditional wooden affect of many Japanese politicians, he is seen as a leading contender to usher in a generational shift in the L.D.P.

“He’s well known for saying the right things to powerful politicians. So he is regarded as a brave challenger to old-style politics,” Mr. Yamaguchi said.

But the party might be better off having him wait to run until after the pandemic, when he would have an easier time marshaling support, Ms. Miura said.

If the party leadership lines up behind him during this election, it will be a sign that it is very worried about the L.D.P.’s political prospects, she said, adding, “He’s the last resort.”