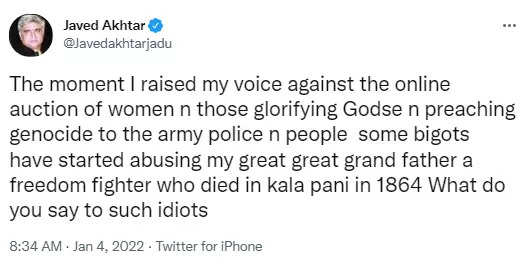 In a tweet on Monday, Javed Akhtar questioned everyone’s silence over the ‘Bulli Bai’ controversy wherein several doctored pictures of Muslim women were shared online for an auction. Soon after, the veteran screenwriter and lyricist faced trolling on social media wherein netizens slammed him for mentioning the Dharma Sansad held in Haridwar, while others questioned his silence over other matters.

Reacting to the same, Javed Akhtar shared in another tweet, “The moment I raised my voice against the online auction of women and those glorifying Godse and preaching genocide to the army police n people, some bigots have started abusing my great great grand father, a freedom fighter who died in kala pani in 1864, What do you say to such idiots”.

Previously, Javed Akhtar’s son, actor-filmmaker Farhan Akhtar had also tweeted against the ‘sickening’ act of putting women for ‘auction’. He had posted, “This is sickening! Request authorities to take swift and strict action against the people behind this grotesque act”. Several other Bollywood personalities, including actors Swara Bhasker, Richa Chadha, Shruti Seth and screenwriter Varun Grover had also commented on the issue and called it ‘disgusting’.