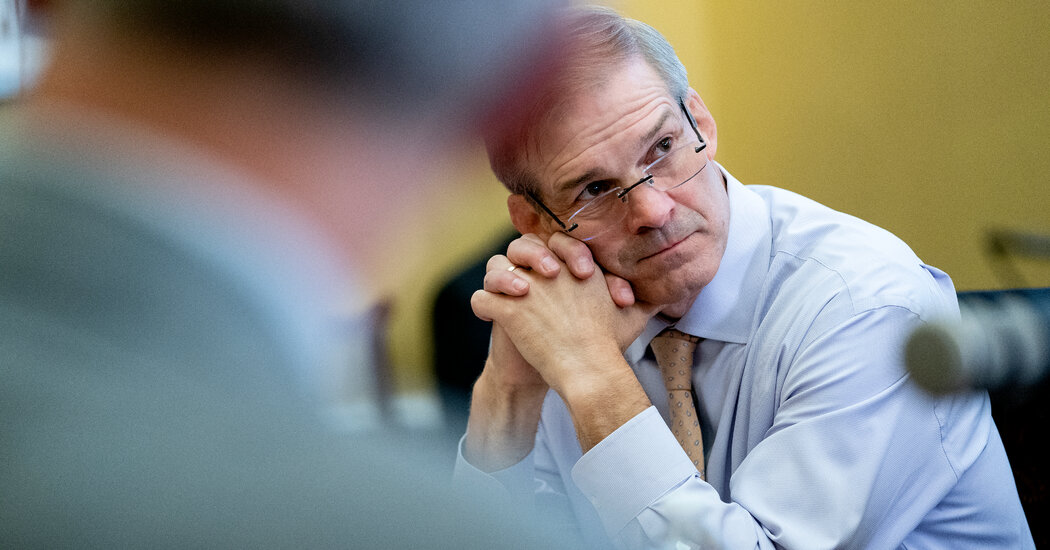 WASHINGTON — Representative Jim Jordan, Republican of Ohio, announced on Sunday that he was refusing to cooperate with the House select committee investigating the Jan. 6 attack on the Capitol, joining a growing list of allies of former President Donald J. Trump who have adopted a hostile stance toward the panel’s questions.

In an effort to dig into the role that members of Congress played in trying to undermine the 2020 election, the committee informed Mr. Jordan in December by letter that its investigators wanted to question him about his communications related to the run-up to the Capitol riot. Those include Mr. Jordan’s messages with Mr. Trump and his legal team as well as others involved in planning rallies on Jan. 6 and congressional objections to certifying Joseph R. Biden Jr.’s victory.

Mr. Jordan — who in November told the Rules Committee that he had “nothing to hide” regarding the Jan. 6 committee’s investigation — on Sunday denounced the bipartisan panel’s inquiry as among what he called the Democrats’ “partisan witch hunts.”

“It amounts to an unprecedented and inappropriate demand to examine the basis for a colleague’s decision on a particular matter pending before the House of Representatives,” Mr. Jordan wrote in a letter to Representative Bennie Thompson, Democrat of Mississippi and chairman of the committee. “This request is far outside the bounds of any legitimate inquiry, violates core constitutional principles and would serve to further erode legislative norms.”

Mr. Jordan was deeply involved in Mr. Trump’s effort to fight the election results, including participating in planning meetings in November 2020 at Trump campaign headquarters in Arlington, Va., and a meeting at the White House in December 2020.

Both the Justice Department and a House select committee are investigating the events of the Capitol riot. Here’s where they stand:

On Jan. 5, Mr. Jordan forwarded to Mark Meadows, Mr. Trump’s chief of staff, a text message he had received from a lawyer and former Pentagon inspector general outlining a legal strategy to overturn the election.

“On Jan. 6, 2021, Vice President Mike Pence, as president of the Senate, should call out all the electoral votes that he believes are unconstitutional as no electoral votes at all — in accordance with guidance from founding father Alexander Hamilton and judicial precedence,” the text read.

Mr. Jordan has acknowledged speaking with Mr. Trump on Jan. 6, though he has said he cannot remember how many times they spoke that day or when the calls occurred.

Representative Liz Cheney, Republican of Wyoming and the vice chairwoman of the committee, has said that Mr. Jordan is a “material witness” to the events of Jan. 6.

In Mr. Jordan’s letter on Sunday, he argued he had little relevant information to share with the committee and that its members should be investigating security failures at the Capitol instead of seeking to question Republican lawmakers.

Key Figures in the Jan. 6 Inquiry

Mark Meadows. Mr. Trump’s chief of staff, who initially provided the panel with a trove of documents that showed the extent of his role in the efforts to overturn the election, is now refusing to cooperate. The House voted to recommend holding Mr. Meadows in criminal contempt of Congress.

Fox News anchors. ​​Laura Ingraham, Sean Hannity and Brian Kilmeade texted Mr. Meadows during the Jan. 6 riot urging him to persuade Mr. Trump to make an effort to stop it. The texts were part of the material that Mr. Meadows had turned over to the panel.

John Eastman. The lawyer has been the subject of intense scrutiny since writing a memo that laid out how Mr. Trump could stay in power. Mr. Eastman was present at a meeting of Trump allies at the Willard Hotel that has become a prime focus of the panel.

“Even if I had information to share with the select committee, the actions and statements of Democrats in the House of Representatives show that you are not conducting a fair-minded and objective inquiry,” he said, accusing the panel of altering documents to mislead the public.

Tim Mulvey, a spokesman for the House committee, said in response to the letter: “Mr. Jordan has admitted that he spoke directly to President Trump on Jan. 6 and is thus a material witness. Mr. Jordan’s letter to the committee fails to address these facts. Mr. Jordan has previously said that he would cooperate with the committee’s investigation, but it now appears that the Trump team has persuaded him to try to hide the facts and circumstances of Jan. 6.”

Mr. Mulvey added that the committee would respond to the letter in more detail in the coming days and consider next steps. The committee has been reluctant to issue subpoenas for sitting members of Congress, preferring to gather evidence from them through a voluntary process. However, Mr. Thompson has said the panel would subpoena lawmakers if it deemed that necessary.

Representative Scott Perry, a Pennsylvania Republican who is close to Mr. Jordan, last month refused a voluntary meeting with the committee, calling the panel “illegitimate.”

A growing number of potential witnesses have also sued the committee to try to block its subpoenas for phone and bank records, though more than 300 witnesses have willingly met with the panel’s investigators.

War May Loom, but Are There Offramps?

Supreme Court Will Hear Challenge to Affirmative Action at Harvard and U.N.C.

Biden’s Pandemic Fight: Inside the Setbacks of the First Year