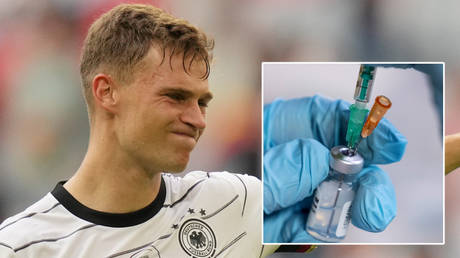 Reports from Germany suggest that Bayern Munich’s unvaccinated star Joshua Kimmich could be forced to forgo around €384,000 after being forced into quarantine after he was a close contact of a teammate who contracted Covid.

It was announced on Tuesday that Kimmich was among five players in the Germany squad who had been placed into quarantine after teammate Niklas Sule – who is fully vaccinated and was asymptomatic – tested positive for Covid.

Sule and Kimmich, along with Serge Gnabry, Jamal Musiala and Karim Adeyemi, were asked to isolate despite returning negative tests for the virus, with the development emerging on a day when Germany recorded its highest yet seven-day infection rate as a surge of new cases of the virus were reported.

The five players were all absent from Thursday’s 9-0 drubbing of Liechtenstein, but Kimmich – who caused a stir in his home country by admitting that he had refused the vaccine for “personal reasons” – could face an arduous path back to the pitch, as well as feeling the impact of his unvaccinated status in his pocket amid recently passed legislation in Germany which states that an employer is not obliged to pay their workers a full salary if they are forced into quarantine after voluntarily choosing to not receive the vaccine.

According to Bild’s analysis, this means that Kimmich could feel the sting to the tune of around $440,000 depending on how long he is absent from Bayern’s team affairs.

The story comes after Germany’s interior minister, Horst Seehofer, directly appealed to Kimmich to reverse his position, and said that the player should know that “vaccination is the main weapon in the fight against the pandemic.”

Kimmich, though, remains very much in the minority. Recent data published by the German football association (DFL) states that upwards of 90% of players in Germany’s top two leagues are vaccinated – but the German national team’s newly-installed coach, Hansi Flick, said that the current trends are as confusing as they are alarming. 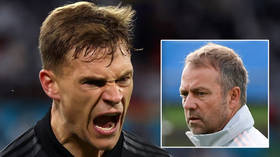 “I find it difficult to judge,” said Flick when questioned about vaccinated players developing cases of the virus.

“The development that vaccinated people also get Corona is like this. We have to trust the experts and how they decide – football has to react to that.”

The exact date when 2020 Champions League winner Kimmich is cleared to return to football remains to be seen, although he will have to spend at least seven days in quarantine.

The 26-year-old will also have to pass a cavalcade of tests before he is eligible, with the final decision on whether on not his salary will be reduced for his quarantine remaining the sole decision of his employer.

Germany visit Armenia on Sunday in their final group stage game of qualifying for the 2022 World Cup, with their place at the finals in Qatar next winter already sealed.

Bayern are next in action when they travel to Augsburg in the Bundesliga on 19 November.