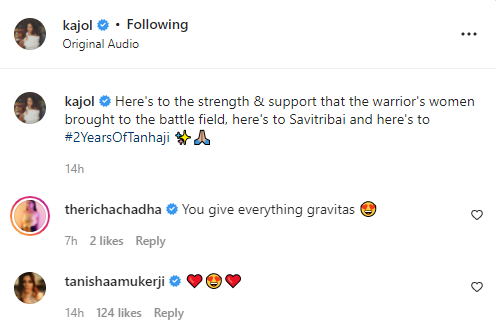 Ajay Devgn and Kajol’s film ‘Tanhaji: The Unsung Warrior‘ completed two years recently. To celebrate the milestone, Kajol took to her Instagram handle to share a special video.
Sharing the video, the actress wrote, ”Here’s to the strength & support that the warrior’s women brought to the battle field, here’s to Savitribai and here’s to #2YearsOfTanhaji ✨🙏🏼”. As soon as she shared the post, Richa Chadha commented, ”You give everything gravitas 😍”. Kajol’s sister Tanishaa Mukerji dropped love in the comments section.

Check out their reactions here:

In a recent interaction with ETimes, actress Elakshi Gupta opened up about the period drama. Gupta said, ”I am extremely grateful for ‘Tanhaji’. I will always be thankful for the casting and the team. It was a big stepping stone for me towards my goal. For me, to play the wife of Chhatrapati Shivaji Maharaj in the movie was big as it was the first achievement. I think I lived my dream of working in a period movie. I would love to play more such characters with longer screen time in future. This movie gave me one Bollywood and one Marathi movie where I got a chance to play the lead actress.”

Remo mourns the death of his brother-in-law