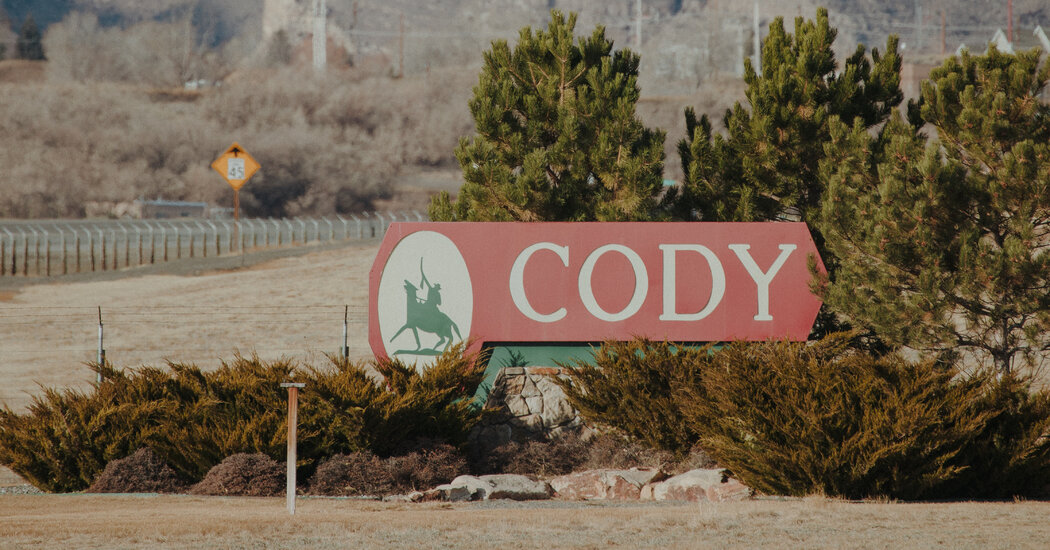 The Kanye West era in Cody, Wyo., may be coming to an end.

The Wyoming ranch that the rap superstar bought in 2019 was put up for sale this week, signaling that Mr. West’s plans to turn the sleepy tourist city of about 10,000 into a factory town for his company, Yeezy, are about as likely to materialize as his election to the presidency.

A listing for the ranch he owns was posted this week on the website of a local realtor, DBW Realty, with a price of $11 million. The listing, which referred to the property as Monster Lake Ranch — its name before the rapper purchased it — made no mention of Mr. West, though it did advertise the ranch’s go-kart track and freshwater “trophy trout fishing” on site. The property is 3,888 acres, according to the listing.

Though the listing was posted Monday, it had been clear to many of the town’s residents for some time that Mr. West, who bought the property almost exactly two years ago, might not be planning on extending his stay.

Earlier this year, he began to sell the four-wheelers that he and his now estranged wife, Kim Kardashian West, rode in an early video clip filmed in the area, said Kellen Whitehead, a sales manager at Whitlock Motors in Cody.

And about three weeks ago, Mr. West sold his fleet of Ford Raptor trucks back to the Fremont Motor Company, the company confirmed.

Mr. Whitehead, who helped Mr. West customize one of those Raptors, said he had not seen the rapper in a year. Asked if he was surprised or irritated that Mr. West seems to have left without making good on the promises he made about investing in the town, Mr. Whitehead gave the verbal equivalent of a shrug.

“Six billion dollars,” he said, significantly exaggerating Mr. West’s reported net worth. “He does what he wants. It’s just that kind of lifestyle.”

Mr. West began traveling to Wyoming regularly about four years ago, shortly after experiencing what was characterized on a dispatch call as a “psychiatric emergency.” He recorded his eighth studio album, “Ye,” in Wyoming, holding a memorable listening party for that album near Jackson.

But ultimately he bought property in Cody, a more Republican-leaning town named for Buffalo Bill Cody, where land is significantly cheaper. While there, Mr. West made a number of extravagant claims about his plans for the area, saying that he would bring much-needed manufacturing jobs to the town and open a store there.

He was a regular presence in town for months after his arrival, residents said in interviews last January. He was a frequent guest at the Cody Steakhouse, a restaurant on the town’s main street, and he and Ms. Kardashian West paid visits to the Boot Barn and other businesses, buying clothing and jewelry. He held one of his Sunday Service concerts at the Buffalo Bill Center of the West in September 2019.

Residents said Tuesday that they had seen less of Mr. West in 2020, particularly after last July when he began to publicly discuss his efforts to be elected president.

Zac Taylor, the news editor of the Cody Enterprise, said that neither he nor anyone else present in a newsroom of four on Tuesday afternoon, had seen the rapper since then. (The Enterprise published its story on the ranch listing at noon on Monday; Mr. Taylor’s wife, who works at a real estate company, gave him the tip.)

Mr. Taylor was ambivalent about the rapper’s two-year stay in town, saying that his publisher had asked in a meeting early on if Mr. West was going to make a big splash or no splash at all.

“I think he landed somewhere in the middle,” Mr. Taylor said.

Matt Hall, the mayor of Cody, said that he had not talked to Mr. West for at least eight months, “since prior to when he started to have some of his marital issues with Kim,” referring to Mr. West’s split from his wife of nearly seven years. Ms. West filed for divorce in May.

Mayor Hall confessed to some disappointment that his most famous constituent seemed to be pulling up stakes, saying that he had been hopeful that “from an economic development standpoint, it would work out for a bit.”

But overall, Mayor Hall said, he did not think that the rapper’s departure would affect the community negatively.

“When somebody like that leaves, it’s unfortunate,” he said. “But I think we’ll all move on.”

Did You See That Video of the Subway Rat Hauling the Crab?

Can I Wear a Ponytail to Work Without Looking Like a Kid?