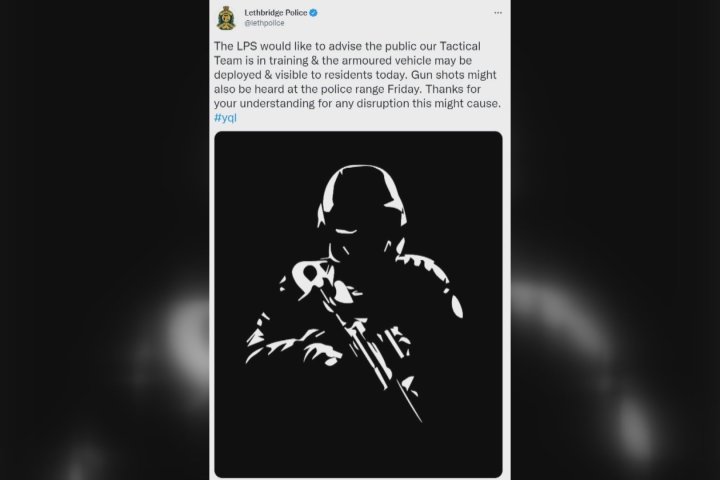 Chief of the Lethbridge Police Service, Shahin Mehdizadeh, is acknowledging an online post that caused quite a stir this week. Even seeing the word “Lethbridge” trending across Canada.

“After reflecting on that, I certainly agree that that wasn’t the right choice of picture and comments that were made by us. We shouldn’t have done that and I apologize for that,” said Mehdizadeh of the Lethbridge Police Service on Thursday.

The post on Tuesday was meant to alert people of training for the Tactical Team that would be ongoing during the week with an armored vehicle. Attached to the message was a photo of a dark figure holding what appears to be a weapon.

The replies were immediate.

Hey Comms folks. Setting aside the question about whether a municipal police force needs weapons of war…My comms question to you – why do you think the public wants images of police that make them look like they are members of a secret death squad?

A subsequent comment from the service came on the Facebook post and also caused a stir. Someone asked what they were training for, and what exactly people in Lethbridge needed protection from.

“Would you rather we just hope for the best and see how that turns out?” was the reply from the Lethbridge Police Service page.

“I’m not apologizing for tweeting that they were doing the training, but obviously apologize for the choice of the image and the comment that was made,” said Mehdizadeh.

“That was maybe not their best idea, to put it tactfully,” said Brittney Le Blanc, a social media strategist from Edmonton.

Le Blanc added that the image comes off as hostile and threatening – two qualities people don’t want associate with their police force, or should expect.

It’s not the first time the force has faced public scrutiny. In 2019, an officer was caught on video repeatedly running over an injured deer.

In 2020, a woman dressed as a stormtrooper, while holding a plastic gun and standing outside a Star Wars themed restaurant, was forced to the ground and handcuffed. No charges were laid in either incident.

During the summer of 2020, two officers were demoted after admitting to unauthorized surveillance of Lethbridge-West NDP MLA Shannon Phillips.

“Unfortunately, we have seen a history of issues with the Lethbridge Police Service, so it would be really nice if they took a better look at what they’re doing and maybe look at some of the systemic issues that might be leading towards this,” said Le Blanc.

“In posting things like this, they’re not helping build that trust back and that’s a really problematic place for them to be. Especially as a service that the community should trust to help them out.”

Chief Mehdizadeh said he wasn’t aware of the Facebook post or tweet until it was online, but he’s committed to making sure the public’s safety comes first.

“What I want people to know is that we are there for their safety. We want to do everything we can so the public feels safe in the community and they rely on us to do that function for them.”

Rumors began circulating online after Tuesday’s post that the Lethbridge Police Service were using a tank during the training.

Mehdizadeh confirmed this isn’t true. The armoured vehicle was bought used in 2017 from Victoria for around $8,000.

“Prior to this vehicle being here, our officers actually had to go hide behind trees when they were going to high risk calls,” said Mehdizadeh. He continued that officers would have to wait around two hours for the armoured vechile to arrive from Medicine Hat.

The armored vehicle won’t be on the road everyday. Instead, Mehdizadeh referred to it as a safety device, or tool, only used when the Tactical Team feel they need it to do their job in a safely.

“This is 2021. This is a modern police department. We need these tools to do our job.”

Le Blanc said that to move forward, acknowledgement is necessary.

“If you have a mistake online the best thing for you to do is to own up to it and apologize and see what you can do to make things better.”

But Chief Mehdizadeh is ready to move the conversation offline, if necessary.

“For the people who may have made those comments, they are more than welcome to come and have a discussion with me to show them the true picture of what goes on in our city.”