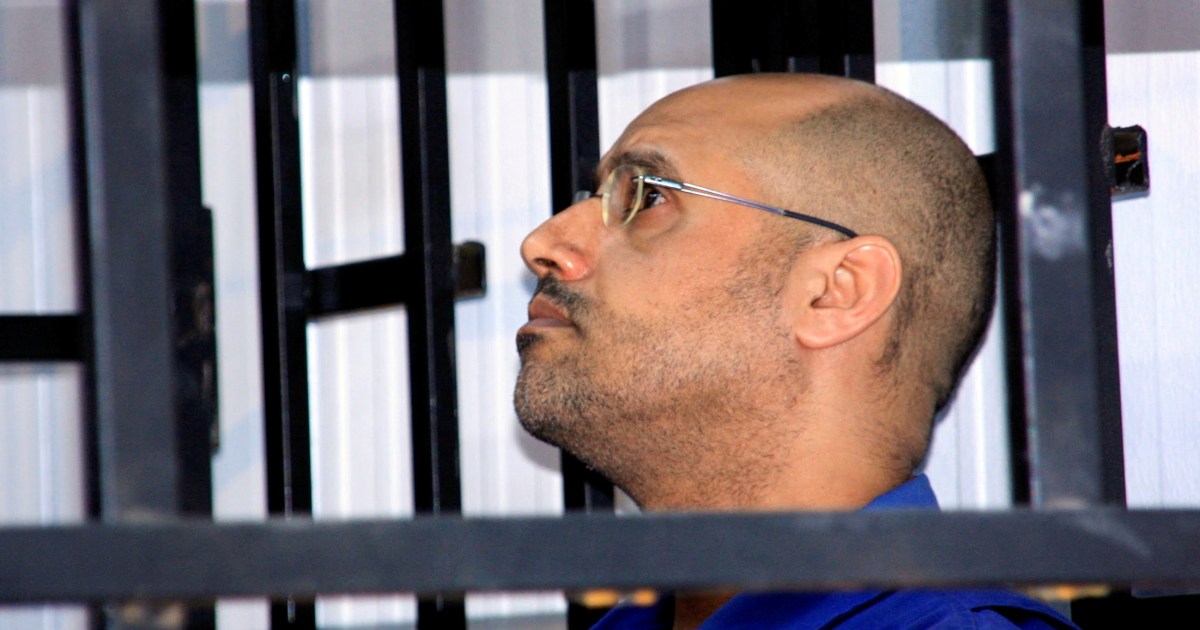 The attack prevented Saif al-Islam Gaddafi from lodging an appeal against disqualification from next month’s presidential election.

Gunmen have attacked a Libyan court before an appeal by the son of slain former ruler Muammar Gaddafi against the rejection of his presidential election candidacy, drawing alarm from the United Nations.

Libya’s government on Friday called the perpetrators a “group of outlaws” who launched an “odious” attack, which caused the court in the southern town of Sebha to shut.

A lawyer for Saif al-Islam Gaddafi said armed men had prevented him from lodging an appeal on Thursday against his client’s disqualification from next month’s presidential election, adding to fears of turmoil around the vote.

Khaled al-Zaidi said in a video that armed men had raided the Sebha court, one of only three registration centres, and stopped him from entering to lodge his client’s appeal against disqualification.

Libya’s electoral commission had announced on Wednesday the rejection of the candidacy presented by Gaddafi, who is wanted by the International Criminal Court for alleged war crimes.

His was one of 25 candidacies disqualified by the commission to run in the December 24 vote that is part of an internationally-backed peace process aimed at ending a decade of chaos.

The unsuccessful applicants had been given 48 hours to appeal the decision.

Al-Zaidi said the attackers had forced all staff from the court building “at gunpoint” hours before the appeal hearing.

“This act is an obstacle to the electoral process,” he said in a video broadcast on Libyan media.

He added that the interior and justice ministries ordered an investigation into the attack.

The United Nations Support Mission in Libya said on Friday it was alarmed by the reported attack on the appeal court in Sebha, strongly condemned any form of electoral-related violence, and reiterated that the electoral process must be protected.

“The Mission reiterates its call for holding transparent, fair and inclusive elections on 24 December,” it said.

Disputes about issues including the eligibility of candidates are threatening to derail the election, as part of a UN-backed peace process initiated last year that saw the formation of an interim government.

The final list of candidates is due to be published by early December once verifications and appeals are completed.

The commission rejected Gaddafi’s candidacy on the grounds of the electoral law, which stipulated that candidates “must not have been sentenced for a dishonourable crime” and must present a clean criminal record.

Sebha is under the control of a group allied to the eastern-based Libyan National Army led by renegade military commander Khalifa Haftar, another of the main candidates in the election.

Haftar, a former CIA asset, is said to have United States nationality, which could also rule him out. Many people in western Libya also accuse him of war crimes committed during his 2019-20 assault on Tripoli.

Haftar denies war crimes and says he is not a US citizen.

Interim Prime Minister Hamid Dbeibah has described as “flawed” the election rules issued in September by the speaker of the eastern-based parliament, Aguila Saleh, who is also a candidate.

In recent years, Saleh drew the ire of many people for lending support to Haftar’s failed assault on the UN-recognised government based in Tripoli last year.

Lebanon’s president in Qatar for talks over Gulf crisis

Power employees and engineers to protest whenever Electricity Bill is tabled